Useless ’evidence’, managed amnesia & mystery witness in Savchenko trialSavchenko Trial turns into Insultingly Absurd PantomimeSavchenko returned if Ukraine ‘recognizes’ a predetermined sentenceNadiya Savchenko: “You can call me the artillery spotter”Savchenko demands that everybody give testimony using a lie detectorSavchenko trial - 3 judges & only the prosecution’s story allowedSavchenko to be tried in obscure ’military zone’ city 150 km from prisonSavchenko Trial: ‘Fort Knox’ Security and 300 kilometres on the roadNew attempt to keep Nadiya Savchenko trial secretSavchenko material shows how Russia concocted ‘case’ and what it can’t concealWords unspoken on first anniversary of Nadiya Savchenko’s captivitySavchenko’s detention illegally extendedOne Birthday Wish on May 11: #FreeSavchenkoInvestigators claim they questioned 108 thousand people over Savchenko caseSavchenko to be hospitalized after tests “raise serious concerns for her health”Yet another charge concocted against Nadiya SavchenkoNadiya Savchenko facing pressure to ‘confess’Savchenko: New charge dismissed as ‘technical mistake’Savchenko renews hunger strike, warns lawless regime must be stoppedIs A Savchenko Deal In The Offing?
• Topics / News from the CIS countries

Imitating a Trial: Lies & Selective Testimony in the Savchenko Hearings 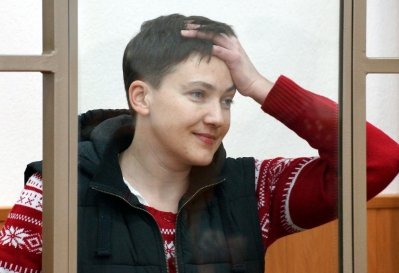 The defence have published all 40 volumes of material in the ‘case’ against Nadiya Savchenko and asked people to distribute them.  Judging by the excerpts of the indictment previously released, and the testimony of one key witness, the material is surely damning  So too, however, is every aspect of this case and the imitation of a ‘trial’ underway.

Nadiya Savchenko had already been captured by Kremlin-backed militants in the Luhansk oblast [Ukraine] when the two Russian journalists were caught in mortar fire and killed.  The defence is able to prove from mobile telephone records and witness reports that Savchenko was captured at around 10 a.m., around an hour and a half before the two journalists came under fire.

The prosecution has now come up with a ‘witness’ who claims that there were technical problems on the day in question, and that the evidence from Savchenko’s phone is therefore unreliable.  This person, Mikhail Pomazan is allegedly an employee of the Life mobile operator.  The defence, however, have received a response from the company in question saying that they have never had an employee of that name.  The lawyers therefore demanded that ‘Pomazan’ be summoned for cross examination.  Despite the obvious validity of such an application, the judge rejected it, refused to add the letters the defence received to the file, and the written testimony was simply read out.

This was after the prosecutor spent over an hour reading out numbers, without any explanation.  It transpired that these were the figures pertaining to MTC base stations in the area, though any point of reading them out except to drag out the case, give the semblance of evidence or to send the audience to sleep remains unclear.

The prosecution then read out a list of items allegedly belonging to Savchenko.  The court was shown a map, pages from a notebook and a pendant – a knife-memory stick.  Savchenko insists that the map is not hers, and that the notes are not even in her handwriting and asked why, if two expert assessments have already confirmed that they are not hers, the notes are still being presented as ‘evidence’.  The defence also noted that the map and memory stick had been brought to Russia by Igor Plotnytsky, head of the so-called ‘Luhansk people’s republic’ and a key witness, a full year after Savchenko was taken prisoner.  Mark Feygin, one of the lawyers present, asked the court to note that the fact that these items were not genuinely Savchenko’s is proof of her innocence.

It is also of critical importance what was not found.  The investigators, for example,  claim that Savchenko, from the top of a telephone tower, observed the journalists and passed on their coordinates to the Ukrainian military.  During that same hearing on Nov 12, the prosecution also presented the results of ‘investigative experiments’ carried out in the Moscow region, which they claim prove that through binoculars enlarging by seven times, at a distance of 2.5 to 3 kilometres. It would have been possible to see that the people were civilian, but not to make out a ‘PRESS’ sign.

Savchenko thus needed to have good binoculars and also radio equipment to communicate the men’s whereabouts to the soldiers.  The prosecution has not come up with either of these two items.

Igor Plotnytsky was questioned twice during visits to Russia, first in March 2015, then in May.  In March he listed various items found in Savchenko’s rucksack, allegedly including binoculars, but without giving any description of the latter.  This point was probably the key reason for the second round of questioning.

Considering the very large number of subjects on which Plotnytsky couldn’t ‘exactly remember’, he proved remarkably specific in May when describing the binoculars.  He claimed they were black army B7 binoculars without a case but with a strap, and a serial number and model name on the left side. He also mentions a radio device (like a walkie-talkie) which was not listed the first time.  He mentioned it for the first time in May, asserting that it was in a black box with a display screen and a panel with keys to press.  “The said items were placed in the weapons room of the Zarya Battalion and later given to one of the fighters. I can’t explain who exactly the binoculars and walkie-talkie were given to.”

It remains to be seen whether Plotnytsky does turn up this week as he has supposedly promised.  The court was apparently surrounded by double the usual (extraordinarily large) number of armed men in camouflage gear, so it is possible he is genuinely expected. The number of questions raised by his account of events is enormous.  In his testimony, for example, he claims that he learned of the journalists’ death after questioning Savchenko once, and decided to question her again.  There is no evidence of this interrogation, nor any explanation in that case why the battalion allegedly released her.  He claims that they had taken several people prisoner, but since the militants had obtained all the information they needed and had problems with food supplies, they decided to give these prisoners "the necessary medical assistance and release them”  They even decided to transport them to a safe place away from the fighting.

These, it should be noted, are the same militants who have been holding journalist Maria Varfolomeyeva hostage since January 2015, and who have twice (once through the Russian propaganda channel Life News) used her obvious distress to gain dubious propaganda points.

At the court hearing on Nov 16, two journalists were questioned, Alexander Tokarev from NTV who ‘interviewed’ Savchenko on June 19, and Viktor Denisov, the cameraman who survived the shelling in which Igor Kornelyuk and Anton Voloshin died.

Roman Moguchy reports that during Denisov’s questioning, another member of the defence team Ilya Novikov entered the courtroom and announced that he had seen one of the investigators Dmitry Manshin in the courtroom.

Since the defence is planning to call him as a witness, they quite legitimately and in full accordance with criminal procedure demanded that he be removed from the court.  The judge refused.

The defence pointed out that the investigator could have been present without the court’s knowledge during previous hearings and have influenced the witnesses and people with victim status.  This was also ignored by the judge.

Over three hours Denisov described how the film crew had not had bullet-proof vests nor Press signs, and any medical supplies with them they had bought themselves.

It is worth noting that both Russia’s Foreign Ministry and state-controlled media went into propaganda overdrive from the evening of the day Kornelyuk and Voloshin were killed (Cynical propaganda mileage from journalist’s death).  There has, in contrast, been total silence over the death of Anatoly Klyan around two weeks later.  It is likely that this is because of the revelations of a Forbes.ru journalist Orkhan Jemal who witnessed the way the journalists appeared to have been deliberately sent to be ambushed (see: Sent to be shot).