Ukrainian Jewish leaders appeal to Holland: Give our country the chance to break with the pastHow a democratic tool became a threat to democracyPlaying with fear and ignoranceFormer Soviet political prisoners call on Holland to say yes to Ukraine’s European futureUkraine: The case for ’voor’ in the Dutch ReferendumAppeal by the leaders of Ukrainian national communities to the Dutch populationUkrainian PEN asks Dutch colleagues to support a YES voteRussia lodges a surreal ECHR inter-state claim against Ukraine over MH17, water for occupied Crimea & "discrimination"Crimean Resistance to Russian Aggression and Moscow’s Savage Revenge Russia tells ECHR that it didn’t annex Crimea & accuses Ukraine & West of ‘fake evidence”Five Ways We Have Changed the World’s Perception of UkraineEU Formally Approves Ukraine Association AgreementBellingcat says Russia used ‘fake evidence’ to point finger at Kyiv in downing of MH17Why Has a Former Soviet Dissident Gone on Hunger-Strike in Britain?What Now For Ukraine’s EU Association Agreement?What European Values if Dutch Referendum Result Stands?Ukraine Lists Individuals It Wants EU To Blacklist Over Savchenko Trial4. Constitutional Process in Ukraine in 2012Language Law creates conditions for violation of constitutional rights
• Topics / Politics and human rights 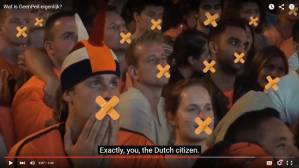 GeenStijl, the Dutch online group promoting a referendum on ratification of the EU-Ukraine Association Agreement seems to want to exploit this agreement to push its Eurosceptic agenda.  The author warns that “Ukraine’s aspirations, for which so many have died, could fall victim to Europe’s own identity crisis”

Ukraine’s Maidan revolution was sparked in late 2013 when then-president Viktor Yanukovych suddenly changed his mind about signing an EU association agreement, after a meeting with Russian President Vladimir Putin. The EU flag was prominent during the months-long revolution, as Ukrainians demanded to be part of the democratic world.

The association agreement itself was far from a definite step towards actually joining the EU, but in reality a set of trade regulations. Its significance was generated by its main opponent, Putin himself, who made it clear that signing the agreement meant rejecting Russia. Nothing in the agreement suggested that Ukraine could no longer have political, commercial or cultural relations with Russia.

Yanukovych fled to Russia and Ukraine’s new president, Petro Poroshenko, signed the association agreement in June 2014. Since then, most EU member countries have ratified the agreement without much controversy. But the Netherlands has not done so yet, and a provocative online group called GeenStijl has managed to collect 440, 000 signatures to organise a referendum about the association agreement. A minimum of 300, 000 signatures are needed in the Netherlands to compel the government to hold an advisory referendum on an issue, under a law that came into force on July 1, 2015. This will be the first such referendum in the country.

GeenStijl apparently wants to exploit the association agreement with Ukraine to advance its Eurosceptic agenda. Ukraine’s aspirations, for which so many have died, could fall victim to Europe’s own identity crisis. In a YouTube video that GeenStijl posted during their campaign to collect signatures, the group said it wanted a referendum because the association agreement “is a good example of the EU’s appetite for expansion, which increasingly leads to far-reaching decisions being made, without democratically consulting the people of Europe.”

“With its association agreement with Ukraine, the EU is really pushing its boundaries to the limit, ” the video’s narrator continues, then repeating Putin’s line that ultra-nationalists have seats in the Ukrainian parliament (as they do in most EU countries too, the narrator neglects to mention). “Eastern Ukraine was even engulfed in a civil war that closely involves Russia, ” the narrator says. Again, it is Putin who characterises his own invasion of Ukraine and annexation of Crimea as a “civil war”.

The video acknowledges that EU association agreements can be symbolic, as in the case of the one with Jordan. But according to GeenStijl, in the case of Ukraine, as with Georgia and Moldova, the EU is “creeping towards the Russian border”. “Now the EU and NATO are trying to incorporate these countries, ” the narrator says. “In short, a geo-political hornets’ nest, but without much honey, ” he adds.

The narrator calls Ukraine, Georgia and Moldova “corrupted oligarchic societies with broken economies that will need banking bailouts, and therefore will turn into net receivers of taxpayers’ money as soon as the agreement comes into effect on January 1, 2016.”

Does the association agreement with Ukraine guarantee banking bailouts using EU taxpayers’ money? It doesn’t appear to. It is 2, 135 pages long. Most likely no one voting in the Dutch referendum will have read it – perhaps not even skimmed it. They will probably vote on April 6, 2016 based on the myriad issues raised during the campaign. GeenStijl claims that the “opinion of the Dutch majority is being ignored”, since a majority have said that they are opposed to Ukraine joining the EU – again muddying the waters.

Reactions from people on GeenStijl’s Facebook page offer insight as to why they gave their signatures in favour of a referendum. Some indeed fear that the EU would have to spend large sums of money supporting Ukraine, as it has done with Greece. Others are concerned that large numbers of Ukrainians will move to the Netherlands. And some think that signing an agreement with Ukraine is equivalent to an act of war against Russia. Dutch people have already been directly involved with the Ukraine war through the tragedy of flight MH17, which was shot down by a Russian Buk missile system, and this has created a negative perception of Ukraine as well as Russia.

To counter the propaganda used by GeenStijl the website and Facebook page Oekraïne-Referendum was set up in late October by Ukrainians and Dutch people whose goal is not to stop the referendum, but to objectively inform Dutch citizens about Ukraine, what the association agreement really means and its benefits for the EU and specifically the Netherlands. The Netherlands is the third biggest investor in Ukraine (800 million euros in 2015, according to the Dutch Foreign Ministry).

“The referendum itself, the first and natural reaction of myself as a native Ukrainian, would be negative, obviously, because it’s being used against Ukraine approaching the European Union step by step, ” says Mikhailo Khrystenko, an IT manager in the Netherlands who is involved with the campaign. “Then if you cool down and think about the referendum as a tool, as a democratic tool, I think it’s good. The problem is whether it’s being used in the right way, and that’s basically what we’re trying to not so much influence, but provide the right information to the people so that they go to the referendum and they vote for, that they at least know what they’re voting for, ” he adds.

The amount of information in the news in the Netherlands about Russia and Ukraine is “close to zero”, Khrystenko says. “After the revolution or during the revolution you saw some footage, you saw some TV programmes about that, but basically when the bloodshed stopped, or mainly stopped, so when it went down, also the media coverage went down, ” he continues. “So right now, and I think it’s basically caused by the referendum itself, you see a little bit of a spike of the information coverage in different programmes, but it’s not nearly enough. People are still thinking myths of the Cold War... Ukraine has had a bad history of being known for Chernobyl, for recently Crimea and revolutions, bloodshed, corruption, that’s all the facts, right. People are not having the total coverage, the total picture of what’s that all about, ” he says.

The migrant crisis is having a big effect on Dutch public opinion, according to Khrystenko. “People are scared, ” he says. “You see in every city here, in every village, even in my village here that’s close to the German border, we have lots of immigrants getting in, refugees. It means that they are going to be eating Dutch pie, eating European pie, that’s understood, and basically the right parties and populistic parties are using that a lot against, or in their campaigns, and this specific one against our campaign is definitely part of those right movements, ” Khrystenko explains.

Dutch people are not necessarily getting information directly from Russian propaganda channel RT, but the Russian message is definitely pervasive in the media, Khrystenko says. “Dutch media, I think, I think it’s media all over Europe, is basically consuming the information streams from Russian media official channels without really checking the facts, or just scratching the surface, not looking deeply enough to understand what the underlying reasons are, and that leads to some of the facts that they’re just taking over, ” he says.

“We launched that website and we already see in the first two weeks, we see basically lots of feedback, we see what the feedback is and we’re trying to respond to that, ” Khrystenko says. “And we see that we’re not being perceived as an independent party, we realise it perfectly well, so we definitely need to get out either to the political parties, or to NGOs, maybe, or to other known faces who can speak on their own behalf, speak out their minds, but then we can work with them and provide them the facts as we see them. It’s up to them basically whether they want to support us or the other party, ” he adds.

News of the referendum has predictably been welcomed by pro-Kremlin media in Russia. Under the  headline “The Dutch vote against Ukraine, ” Gazeta.ru commented cynically: “Russia wasn’t against the political aspect of Ukrainian integration, but in terms of the economic aspect said that it would take retaliatory measures. And not for no reason. The fact is that now Ukraine, as a member of the CIS, has a preferential trade regime with Russia. After Ukraine joins the EU customs tariffs between them would be annulled, and a flood of goods could surge into Russia from the EU and the US.”

Even if the majority of voters in the referendum are against the agreement, it is unlikely that the Dutch government will not ratify it. The EU could also approve the association agreement even if the Netherlands does not ratify it. But as a platform for criticising Ukraine, and directly or indirectly putting forward Putin’s version of events, this referendum is ideal.

Republished with permission from http://xsovietunion.blogspot.co.uk/2015/11/dutch-referendum-puts-ukraine-in.html?view=magazine