Imprisoned Crimean Tatar Leader: This is Terror against my People 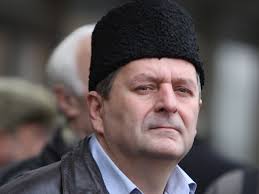 Since the case underway in Russian-occupied Crimea is in breach of Russian law, the prosecution has opted for an easier option: detention without trial.  Crimean Tatar leader Akhtem Chiygoz was first arrested on Jan 29, 2015, and a court in Simferopol has just extended his detention until Jan 29,  2016.  The same court extended the detention of two other Crimean Tatars – Ali Asanov and Mustafa Degermendzhy – for three months, until Feb 19, 2016.  Since the charges are a legal nonsense, and Asanov and Degermendzhy have clearly refused to give false testimony against Chiygoz, there is no reason to believe that the three will then be released.

Chiygoz is accused of organizing, and Asanov and Degermendzhy of taking part in mass disturbances.  The charges, however,  under Russian legislation, pertain to a pre-annexation demonstration which took place on Feb 26, 2014, unequivocally on Ukrainian territory and under Ukrainian legislation.

All three men are Ukrainian citizens, and if Russia is claiming that they have automatically become Russian nationals as well, it is doing so in breach of international law.  Russia’s own Criminal Code (Article 12 § 3) says that foreign nationals who committed an offence on the territory of another country may only be prosecuted under Russian legislation if “the crime was directed against the interests of the Russian Federation or a citizen of the Russian Federation.”

This was not the case, and there is no possibility for a trial having any semblance of legality.

This was essentially what Akthem Chiygoz stated in court on Tuesday.  He called his isolation from society politically motivated.

“The aim is to put Crimean Tatars in their place.  I am not planning to leave my homeland.  I have repeatedly stated in court that the arguments presented by the investigators are unfounded. I also consider that the investigators, the prosecutor’s office and the courts are biased.  There is great terror underway in Crimea against my compatriots. There is unfortunately no possibility of speaking of justice.  Despite the fact that your president said that the lessons of repression from the previous century should be a lesson, these court hearings give me grounds to consider that they have not served as a lesson and the repression is continuing, with judges passing rulings as dictated by the punitive bodies.  The so-called ‘case’ over which I am being held in isolation is a farce, there are no grounds, not to mention any proof in the case material.  I am convinced that this is a commissioned political prosecution”.

There were around 100 relatives, friends, members of the Mejlis and of the Crimean Tatar national movement present in the court or waiting outside.

It should be stressed that this is the only opportunity for the families of the men to even see them.  Ali Asanov has four small children, the youngest born in June, after he was arrested.

Both he and Degermendzhy are almost certainly imprisoned for not ‘cooperating’.  In a recent interview to Radio Svoboda’s Crimean Service, Mustafa’s father, Bekir Degermendzhy explained that his son had been told openly from the beginning that he would be freed if he gave testimony against Chiygoz.  He refused and the charges now read that Mustafa was in a conspiracy with Chiygoz whom he had never even met.  His parents are not allowed to visit him and depend on their lawyer for information.

The detention hearings are also farce with the prosecution claiming that the men should not be released from custody because they could supposedly ‘influence the course of the investigation’ and because they are Ukrainian nationals and could, they claim, ‘abscond’.   On top of the absurdity of these reasons, the investigation has formally ended, yet the judges go through the pretence of a court hearing only to pass the ruling demanded of them.