Imitating a Trial: Lies & Selective Testimony in the Savchenko HearingsUseless ’evidence’, managed amnesia & mystery witness in Savchenko trialSavchenko Trial turns into Insultingly Absurd PantomimeSavchenko returned if Ukraine ‘recognizes’ a predetermined sentenceNadiya Savchenko: “You can call me the artillery spotter”Savchenko demands that everybody give testimony using a lie detectorSavchenko trial - 3 judges & only the prosecution’s story allowedSavchenko to be tried in obscure ’military zone’ city 150 km from prisonSavchenko Trial: ‘Fort Knox’ Security and 300 kilometres on the roadNew attempt to keep Nadiya Savchenko trial secretSavchenko material shows how Russia concocted ‘case’ and what it can’t concealWords unspoken on first anniversary of Nadiya Savchenko’s captivitySavchenko’s detention illegally extendedOne Birthday Wish on May 11: #FreeSavchenkoInvestigators claim they questioned 108 thousand people over Savchenko caseSavchenko to be hospitalized after tests “raise serious concerns for her health”Yet another charge concocted against Nadiya SavchenkoNadiya Savchenko facing pressure to ‘confess’Savchenko: New charge dismissed as ‘technical mistake’Savchenko renews hunger strike, warns lawless regime must be stopped
• Topics / News from the CIS countries 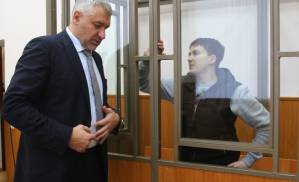 Igor Plotnytsky, the militant leader involved in Nadiya Savchenko’s capture in eastern Ukraine, has given testimony in Russia’s imitation trial of Nadiya Savchenko, but what he said is top secret.  Plotnytsky asked for the hearing to be behind closed doors, claiming that he “is a public figure, a parliamentary deputy” and fears for his safety. There are men with machine guns everywhere, as well as snipers in position on the roofs around the courtroom, and manifestly no grounds for such an application, yet the court agreed to eject all but the parties to the proceedings, and prohibit recording.  It then, just as predictably, rejected the defence’s outraged demand for the judges’ removal from the case.

Savchenko had added her voice to the objections put by her lawyers, saying that the court had given no reason for acceding to Plotnytsky’s demand, and had not recorded the defence’s objections.  She was reprimanded by the presiding judge for insulting a judge when she called them puppets.  She was undeterred, and continued:

“You are puppets.  If it’s not you, there’ll be others, and therefore I’m asking you to leave.  I support my lawyers.  You will kill me in Russia anyway, without any political statements.  I am the one who is in danger, I am in a cage and afraid….”

The journalists and Ukrainian consul were forced to leave, and all parties told not to record the hearing.  The prosecutor tried to get the defence’s mobile phones and laptops removed, but the presiding judge appears to have fleetingly recalled the oath he once made, and rejected the application.

The lawyers were, however, prohibited from reporting anything from the courtroom.  The prosecutor has already threatened to lodge criminal proceedings against Feygin for allegedly breaching this ban.  As Feygin noted, it is far from the first attempt to get him imprisoned, and the same applies to Nikolai Polozov, the other lawyer present.

In fact, the defence tweeted extremely little information, but Feygin did post a photo of Plotnytsky which prompted the threats of prosecution.  He also reported that Plotnytsky claimed that the defence are presenting the trial incorrectly in the social media (he is reported elsewhere to have claimed that they were “politicizing” it.  Further to this, Feygin said only that Plotnytsky was making a point of being very correct.  This, it should be said, probably did take some effort.

Plotnytsky is now head of the self-proclaimed ‘Luhansk people’s republic’, but was commander of the ‘Zarya’ militant battalion and has been identified by Savchenko as one of the men directly involved in her capture and abduction to Russia.

Mediazona reported the brief account given by Polozov as he left the court before the end of the hearing.  At the time, Plotnytsky was still being questioned by the prosecution.  “He said that Savchenko had not specifically told him that she was an artillery spotter.”  He had told somebody known as Kep to release her in a particular township.  At the present time, Polozov reports, Plotnytsky regards this as a political trial, but at the time he spoke with her as one officer to another.  He adds that Plotnytsky was talking less with the court, than with Savchenko, and that he himself was adopting the stand that he had himself done nothing, and only been in charge.

Since the court has allowed the evidence of the most important witness in this travesty of a trial, and his cross examination, to be given in secret, we must return to the testimony given to the investigators which the defence earned another threat of prosecution for posting on the Internet.

This testimony also leaves critical questions unanswered, with none of them being  picked up by the investigators who ask only two questions  – whether Russians are involved in the military conflict and whether the militants are receiving arms from Russia.  Plotnytsky gives the required negative answer to both..

Russia is claiming that Savchenko acted as a spotter directing the shelling by Ukrainian soldiers in which two Russian journalists – Igor Kornelyuk and Anton Voloshin – died on June 17.  Even if the charges made sense, it can be proven that she had been captured by the militants before the two journalists were killed and therefore has an irrefutable alibi.

Plotnytsky constantly says that he can’t remember this or that, yet in May he suddenly found himself able to ‘remember’ the binoculars in detail.  He claims they were black army B7 binoculars without a case but with a strap, and a serial number and model name on the left side. He also mentions a radio device (like a walkie-talkie) which was not listed the first time.  He mentioned it for the first time in May, asserting that it was in a black box with a display screen and a panel with keys to press.  “The said items were placed in the weapons room of the Zarya Battalion and later given to one of the fighters. I can’t explain who exactly the binoculars and walkie-talkie were given to, ”.  He doesn’t try to explain either why it required a second trip to Russia and questioning for him to ’remember’ the walkie-talkie at all.

He claims that he learned of the journalists’ death after questioning Savchenko once, and decided to question her again.  There is no evidence of this interrogation, nor any explanation in that case why the battalion allegedly released her.  Plotnytsky asserts that they had taken several people prisoner, but since the militants had obtained all the information they needed and had problems with food supplies, they decided to give these prisoners "the necessary medical assistance and release them”  For some reason he immediately gives another reason (the lack of a separate room for women prisoners) why they supposedly decided to release Savchenko.  Not only were the militants magnanimous enough to release Savchenko and the other prisoners, but they were even so concerned not to risk their life and health, that they decided to transport them to a safe place away from the fighting.  Plotnytsky asserts that he learned of her arrest in Russia from the media.

Polozov later tweeted that “publicity is the chief enemy of dodgy cases”, and suggested that both the prosecution and the court appear to fear Twitter more than the evidence of Savchenko’s innocence.  The reason has, unfortunately, already been reported here on a number of occasions.  The court (judges Leonid Stepanenko, Ali Khaibulaev and Yevgeny Chernysh) can and does simply refuse to add material to the case or allow witnesses for the prosecution to conceal information that will expose the fact that they are lying.  All of this is critically important information, which needs to be circulated as widely as possibly.  The trial is of Russian justice, and any reports are of necessity damning.