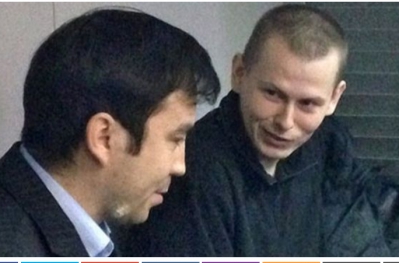 The court hearing on Nov 23 in the trial of two Russians captured in May 2015 in eastern Ukraine demonstrated yet again what an uphill battle the men’s defence lawyers will have to convince anybody that their clients, Yevgeny Yerofeyev and Aleksandr Aleksandrov, were not active Russian military intelligence officers [GRU].  Efforts at previous hearings to claim that the men had been pressured or even tortured into presenting themselves as GRU officers fail to explain why they told this to everybody, including their compatriots during one to one conversations.

The court on Monday began with a video clip showing well-known talk show presenter Savik Shuster speaking with the men in their hospital wards.  Shuster does not explain whether the men were asked if they wished to speak with him, and the ethics of showing their interviews on television can be questioned.  They do not give the impression of speaking under duress, and say nothing that does not correspond with the video which Ukraine’s Security Service [SBU] has demonstrated.  Both state that they were on duty in Ukraine in their capacity as Russian GRU spetsnaz officers.

Shuster asks Aleksandrov if he is a terrorist.  The latter replies that he is just an intelligence officer, that he was simply obeying an order and he really wants to go home.  Yerofeyev was asked whether he would prefer an honest, open trial in Ukraine or to be exchanged as a prisoner of war and return home.  Unsurprisingly, he was emphatic that he wanted to go home.

Yerofeyev’s lawyer Oksana Sokolovskaya demanded publicly that Shuster appear in court and explain on what grounds he had “interrogated” the men.

Thus far, the evidence in court is based on the SBU tapes made two or three days after the men were captured, and while they were still in hospital.  The defence strongly opposed their inclusion in the file material, however there were interesting differences as to why.  During the first hearing, both men asserted that the tapes should not be considered as they had been under heavy medication.  Yerofeyev had, in the past, only ever said that he was put under pressure.  On Nov 19, however, he asserted that he had been tortured.

Even if we assume that the men did not give their stories voluntarily to Shuster, they confirmed the same details on many other occasions. .

The men were visited in hospital on May 20 by representatives of the OSCE Monitoring Mission who pointed out that they spoke to them “without the presence of Ukrainian authorities” and that both had said that they were Russian military servicemen on a reconnaissance mission. They were also seen by the International Red Cross who did not express any concern.

They also spoke with Sergei Krivenko, a well-known Russian human rights activist and member of the Human Rights Council under Russia’s President  In his report , he stated that Sergeant Aleksandrov and Captain Yerofeyev had denied Russia’s claim that they were no longer in military service.  He himself pointed out that the conditions were good, with both men having separate rooms, which were clean and bright.  Neither men made any complaints about the conditions and they categorically denied any form of torture or physical pressure on them since their arrest, as claimed by Russian television.  They asked for help in contacting their families as all phone numbers that they had were either blocked, or didn’t answer. Their main concern, Krivenko said, was that they were being prevented from contacting their families, and they were asking Krivenko and the Human Rights Council to help.

All of this coincided with the report by Pavel Kanygin from the Russian independent newspaper Novaya Gazeta who first spoke to the men on May 22, who told him in detail about the reconnaissance work they were engaged in as Russian servicemen.  He visited them again at the end of the month. He explained that he had not planned to take any photos, but the men asked him to, explaining that it was only through such visits that they could make any contact with their families.

It was interesting that during one of the hearings, which are taking place in the presence of the Russian consul Alexei Gruby, the prosecution’s decision to provide the men with protection was read out.  Such protection was needed, the decision stated, because their lives could be in danger from radical Ukrainians and from the Russian security service.  Both men had also made written applications for protection.

The defence asserted that this was ‘inadmissible evidence’ and should not be included.  It did not provide any arguments, and presiding Judge Mykola Didyk responded that the court would decide whether evidence is inadmissible.

After the previous hearing, Russian commentator Ilya Milshtein  pointed to the stark difference between two trials now underway, that in Russia of Nadiya Savchenko, former military pilot, now MP and declared Hero of Ukraine and the trial of the two Russian spetsnaz officers now on trial in Kyiv.  Although Russia is now illegally holding Savchenko prisoner, all democratic countries and international bodies have demanded her release, and Milshtein quite correctly predicts the joyous hero’s welcome she will receive back in Ukraine.

It is unclear what awaits the two men now on trial in Kyiv, and the reason has nothing to do with Ukraine.  It became clear to everybody, and most painfully to the men themselves back in May this year that when in need, they could expect nothing from Russia.  Or not, at least, if they told the truth, in which case Russia’s Defence Ministry would deny them and cut them off from their homes and family.

After initial silence, Moscow admitted the men were Russian but claimed that they had left the military at the end of 2014, and were fighting for the Kremlin-backed militants of the so-called ‘Luhansk people’s republic’ on their own initiative.

Ukraine asserts (and the men earlier repeatedly confirmed to Russian and European visitors) that they were Russian military intelligence [GRU] officers on service in Ukraine.  By September, Yerofeyev had begun denying his earlier statements and saying, as did the Russian Defence Ministry, that he had been a ‘people’s militia’ officer on contract to ‘LNR’.    In October it was learned that a new lawyer had been taken on by Aleksandrov’s family.  It was suggested then, and has since transpired, that represented by the new lawyer Yury Hrabovsky, Aleksandrov was also to assert that he had not been an active military intelligence officer, but ‘on contract to LNR’.

They and their defence have demanded ‘prisoner of war’ status.  This has been turned down twice, with the court stating it found no grounds for such status.

Ukraine has charged the two men with waging aggressive war, terrorism and smuggling arms.  The indictment was read out in full at the first hearing.  There is a long introduction which cites, among other international agreements binding upon Russia, the 1994 Budapest Memorandum.  In that document Russia promised to not encroach upon Ukraine’s territorial integrity and political independence, and to never use weapons against Ukraine, except in self-defence”  The Memorandum was first breached in February 2014 through Russia’s invasion and annexation of Crimea, and largely ignored by its other signatories (the USA and UK), but has not been revoked and therefore remains in force.

The indictment describes in detail Russia’s direct military involvement in the fighting in eastern Ukraine.  This is denied by Moscow, but has been confirmed by NATO, the USA, and outlined in numerous reports, such as the RUSI report Russian Forces in Ukraine by Igor Sutyagin.

The prosecution asserts that Captain Yerofeyev as commander of an intelligence spetsnaz group from Tolyatti, in Russia, and Sergeant Aleksandrov, from that group carried out intelligence and sabotage activities and also helped LNR.  As part of a group of 220 Russian military servicemen, they allegedly trained in the Rostov oblast of Russia until March 26, 2015.  They then crossed illegally into Ukraine through a border crossing under militant control, equally unlawfully bringing weapons which had not passed through Ukrainian border control.

On May 16, near Shchastya in the Luhansk oblast, they are alleged to have carried out an attack on Ukrainian soldiers and SBU [Ukrainian Security Service] counter-intelligence officers.

One Ukrainian soldier – Vadim Pugachev – was killed, and three others were injured.  Yerofeyev and Aleksandrov were also injured and taken into custody.

There are 6 volumes of material in the case, and the testimony of the surviving Ukrainian soldiers.  One of these – Andriy Olkovych-Novosadyuk –  told the Mediazona correspondent that he had taken part in detaining Yerofeyev and Aleksandrov.  He asserts that they immediately admitted to being military intelligence officers, who were retreating and leaving mines around the Ukrainian military.

While both Yevgeny Yerofeyev and Aleksandr Aleksandrov are now repeating Moscow’s line and Yerofeyev has even claimed he was tortured into saying he was an active GRU officer, it is difficult not to suspect that it is their current position which is the result of pressure brought to bear on them.

Although Yerofeyev and Aleksandrov have now both changed their story, and their defence are united in pushing for them to be declared POW and not subject to trial, Aleksandrov has asserted only that he gave testimony to the SBU under the influence of painkilling and similar drugs.

Not one of the other independent visitors who heard the same story back in May and early June suggested that the men were not in a state to know what they were saying.  And what they said exposed Russia’s lies about its military engagement in Ukraine.