Crimea without Power: Where Now? 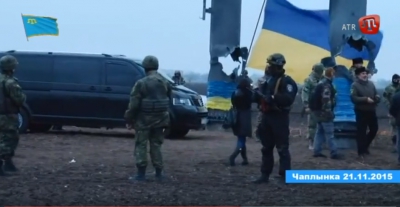 As of early Sunday morning Crimea appears to be without power after explosions destroyed previously damaged electricity pylons.  The Crimean Civic Blockade asserted at around 1 a.m. that Crimea was totally without power, that the lines bringing electricity to the peninsula were down and could not be repaired. How accurate this is remains to be seen, though the move has certainly proven the degree to which over 18 months after Russia’s invasion and annexation of Crimea, the peninsula is still largely dependent on Ukraine for power.

This new development follows serious confrontation on Saturday afternoon and evening between activists from the Crimean Blockade underway since Sept 20 and the police and National Guard.  News of the explosions came scarcely an hour after promising indications that further conflict might have been averted.

The clashes near Chaplynka and one of the border crossings into Crimea came on the second anniversary of the Euromaidan protests.  This elicited many bitter comments on social networks, especially from Crimean Tatars shocked by the use of force against peaceful protesters.

Crimean Tatar TV ATR has released video footage of the confrontation on Saturday afternoon.  ATR explains that around 100 armed troops from the Kherson Battalion and the National Guard, led by deputy head of the Kherson regional police Ilya Kiva, surrounded blockade activists who were standing guard and blocking access to the pylons.

The soldiers can be seen marching up to the activists, one of whom, a fairly elderly Crimean Tatar cries: “Glory to Ukraine!”.   The soldiers say nothing, just keep advancing, with activists pushed out of the way.  They were reported to have also hit activists with the butts of their rifles.  This is not visible on the video, however Ukraine’s Minister of Information Policy Yury Stets stated on Saturday evening that he had demanded that the police initiate a criminal investigation over the violence against ATR journalist Gulsum Khalilova.  She was hit with a rifle butt in the stomach while reporting from the scene.  Kiva asserted that an activist had inflicted a knife wound on a police officer, however there has been no further news of this, and the activists denied any such incident.  The situation was extremely fraught and the distress visible on the elderly Crimean Tatar’s face is shared by many.

Efforts were apparent, however, to avoid bloodshed.  Lenur Islyamov, one of the blockade initiators was blunt with Kiva.  He pointed out that no Crimean Tatar blood had been shed in mainland Ukraine, and that Kiva and his men would bear responsibility for any shed now since the activists were not moving.

Both protest and negotiations were held also in Kyiv.  Around 200 Crimean Tatars and other Ukrainians gathered in protest outside the President’s Administration on Saturday evening. It was later reported that Crimean Tatar leaders and Ukrainian MPs Mustafa Dzhemiliev and Refat Chubarov had spoken with President Petro Poroshenko for 40 minutes.  Chubarov addressed the crowd outside, telling them that Poroshenko had promised on Monday or Tuesday to ask the Cabinet of Ministers to adopt a decision regarding suspension of trade with Russian-occupied Crimea.  They also spoke with Hatia Dekanoidze, the head of Ukraine’s National Police and were reported to have “agreed on clear steps to reduce civic tension around the damaged electric pylons”.   The police had insisted that the damaged pylons could be hazardous, and that the damage endangered electricity supplies not only to Crimea, but to the Kherson and Mykolaiv oblasts.

That, unfortunately, is unclear.  It is late November, and the peninsula cannot remain without electricity.  Nor will Russia admit defeat and return Crimea to Ukrainian rule.

It is also not guaranteed how Crimeans will view this latest of many disruptions to their lives.  Pavel Kazarin from Radio Svoboda’s Crimean Service spoke earlier in the evening with Sergei Psarev, a blogger from Yalta.  He says that “very many people” in Crimea do not understand these blockades.  “The economic blockade has not influenced anything, and the energy blockade will bring only suffering. Because comrades Konstantinov, Aksyonov and the Russian military will have power since they have diesel generators.  And our small children will be ill and die”. Psarev warns that the only effect will be to turn even those pro-Ukrainian Crimeans against Ukraine

Kazarin points out that there is no unanimity in mainland Ukraine either, with Crimeans now exiled in Kyiv also arguing as to whether Ukraine has the right to use an energy blockade.  He adds that this is both a question of morality and of the effectiveness of such a move.  .

Kazarin also spoke with energy specialist Mikhail Honchar from the Strategy XXI Centre for Global Studies, who pointed to certain other issues.  Ukraine has a united energy system which gets some electricity from the Russian Federation.  While in principle, Ukraine has enough energy to cope, in the event of any deliberate cuts from Russia or areas (Donbas) under Russian control, then that situation would change.  This would mean that Crimea would have to be cut off, but it could also cause problems for all of Ukraine.

Lenur Islyamov also presented the position of those carrying out the blockade.  Certainly the Crimean Tatars who initiated the blockade deny any part in what by the morning of Nov 20 was very obviously deliberate destruction of the pylons bringing electricity to Crimea.  Mustafa Dzhemiliev, Chubarov and other Crimean Tatar leaders have, however, consistently called for blockades as a means of forcing Russia to stop grossly violating the rights of Crimean Tatars, ethnic Ukrainians and any who oppose Russian occupation.

Islyamov notes that Ukrainians keep asking them whether it’s legal what they are doing in blocking the roads and the repairs to the energy supplies, yet do not ask other pertinent questions.  Is it legal that under Russian occupation, Ukrainians should be held in Crimean or Russian prisons, that armed searches of a Crimean Tatar district, of mosques, etc. should be carried out?

Explaining why they were calling for an economic blockade, Mustafa Dzhemiliev pointed to the absurdity of the situation where Russia was oppressing Ukrainian citizens in Crimea while Ukraine acted as though it was business as usual.  “85% of the food; 80% of the water and electricity provided to Crimea which Russia claims is its territory is provided at Ukraine’s expense.  Why on earth?  Is it not too high a price to supply the occupation regime?”

The move was probably belated and should have been made at the outset by Ukraine’s government  The very civic nature of the blockade has led to serious problems and infringements by some of the Right Sector and other activists who became involved.   The same conflict was seen on Saturday with the Ukrainian authorities in inevitable confrontation with civic activists.  They were peaceful, yet the act of blowing up electricity pylons is anything but, and the brutal truth is that people cannot be left without power.