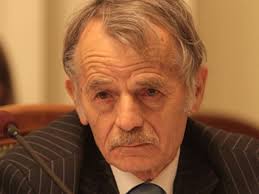 Dzhemiliev and other Crimean Tatars have denied destroying the pylons, with both Lenur Islyamov who is at the scene and Dzhemiliev from Kyiv saying that it’s unclear whether they were blown up or ‘blown down’ by the wind.  Crimean Tatars and other participants in the civic blockade are, however, preventing repair work on the pylons which were initially damaged by explosions early on Nov 20, and then again late on Saturday night.

The blackout highlights the degree to which Russia’s claims that Crimea was always Russian have ignored the brutal truth of how dependent on mainland Ukraine Crimea is.  This is probably the reason why there was relative silence from those normally vocal in such situations – from Russia’s Investigative Committee to the most loyal propaganda channels.  While the state-owned RIA Novosti tried to be upbeat about the blackout having not caught Crimeans unaware,  it is impossible to hide the enormity of the situation and a state of emergency has been declared throughout the peninsula.

While early reports appeared to push the idea that ‘Ukrainian nationalists’ had caused the blackout, a later claim from the de facto deputy prime minister Ruslan Balbek was that “Islamic radicals” were behind the developments, with these supposedly led by Mustafa Dzhemiliev.  The assertions are nothing new with Balbek having come out in October with the claim that Crimean Tatar leaders were « recruiting for the Islamic State ».

This might seem a good line to push after the horrific terrorist attacks in Paris, Beirut and others, but the absurdity is not only in the allegations against the world-respected Mustafa Dzhemiliev.  The Islamic State and terrorists generally, are not known for issuing specifically human rights-linked demands.

In his interview to Liga.net, Mustafa Dzhemiliev explained that the conditions for concluding the next agreement on electricity supplies to Crimea were:

the formation of a commission to investigate the disappearances and murders since Russia invaded Crimea;

removal of the bans on entering their homeland imposed on Dzhemiliev, Refat Chubarov and others;

permission for international organizations to monitor the human rights situation and “to reinstate those democratic rights which existed in Crimea under Ukrainian rule.”.

These scarcely ‘radical’ demands must be met, Dzhemiliev says, or they cannot guarantee that the electricity lines will be reinstated.  He says that the activists will allow access to the power lines providing electricity to mainland Ukraine, but not to Crimea.

In fact, of course, the confrontation on Saturday afternoon, Nov 21, between the blockade activists and National Guard soldiers and police showed that force can be used to overcome any blockade.  Thus far, Ukraine’s leaders are not doing this.

Mustafa Dzhemiliev was highly critical of the heavy-handed methods used by Ilya Kiva, deputy head of the Kherson regional police.  Instead of explaining that work needed to be done to ground the pylons as an urgent safety precaution, his men had stormed the activists causing injury and outrage.

Asked if Ukraine can afford to impose an electricity blockade on Crimea, Dzhemiliev was emphatic.  “Of course Ukraine can.  Why can’t it if the country is at war?  It’s absurd: why should we provide the occupiers with all necessities?  You don’t behave like that in a civilized country. If the occupiers have seized our territory, then they need to be forced out of there and not provided with comfortable conditions.”

Mustafa Dzhemiliev said that Crimean Tatars had come to them from Crimea or phoned him thanking them for the development.  He also asserts that the 350 MW which he says Crimea can produce itself, against the needed 1000 MW is enough to provide energy to hospitals and schools.

This, unfortunately, seems optimistic.  A state of emergency has been declared with schools, businesses, etc. closed on Monday.  There are reported to be massive queues for bread with people worried that deliveries will be stopped by the blackout.  The most worrying situation is obviously in hospitals.  The Crimean Human Rights Group reports that while some are using generators for emergency care and for operations, at least one hospital in Sudak does not have its own generator and is already facing constant disruption.

Suggestions have been made that Ukraine’s leaders are effectively letting Crimean Tatar and other activists carry out a blockade that they support but don’t want to initiate.  This would not explain the heavy-handed measures used on Nov 21 in which one journalist and a number of activists were injured.

It was after that confrontation and ensuing protests that Mustafa Dzhemiliev and Refat Chubarov held talks with President Petro Poroshenko and reached broad agreement on a trade embargo, with the Cabinet of Ministers to draw up a list of foods that can be allowed.  There is no agreed position yet on energy supplies.  Dzhemiliev says that Poroshenko understands the Crimean Tatars’ position and they can understand his, namely that there is an agreement on providing electricity which must be observed.

Fine, Dzhemiliev says, but adds that a new agreement must be signed to come into force from Jan 1, 2016 and with respect to that agreement their conditions are clear.  Before that, he suggests, electricity may be partially restored, although he can’t say at the moment.  “A lot will depend on the behaviour of the occupiers, in the first instance with respect to our prisoners”.

Moscow has received an unpleasant jolt and knock to its ‘Crimea is ours!’ narrative, but how it will react is hard to predict.  With almost total control over the media, and considerable support among Russians, despite the unpleasant consequences, for its forcible annexation of Crimea, it will simply find some way to deflect public attention.  It is also, of course, working on measures to bypass dependency on Ukraine, and, according to the latest Levada Centre survey enjoys massive (87% ) support for annexation.  52% people called the catchphrase ‘Krymnash’ [‘Crimea is ours’] “a symbol of triumph and pride that Crimea has returned to Russia”.

This sudden escalation of the blockade and the categorical demands put by representatives of Crimea’s main indigenous people should provide a useful, if belated, jolt to Ukraine’s leaders.  It has certainly made it clear that much more is needed than statements condemning political persecution of opponents of annexation and other violations, and Ukraine does have levers at its disposal.