Savchenko’s Kremlin-backed militant captor allowed to give testimony in secretImitating a Trial: Lies & Selective Testimony in the Savchenko HearingsUseless ’evidence’, managed amnesia & mystery witness in Savchenko trialSavchenko Trial turns into Insultingly Absurd PantomimeSavchenko returned if Ukraine ‘recognizes’ a predetermined sentenceNadiya Savchenko: “You can call me the artillery spotter”Savchenko demands that everybody give testimony using a lie detectorSavchenko trial - 3 judges & only the prosecution’s story allowedSavchenko to be tried in obscure ’military zone’ city 150 km from prisonSavchenko Trial: ‘Fort Knox’ Security and 300 kilometres on the roadNew attempt to keep Nadiya Savchenko trial secretSavchenko material shows how Russia concocted ‘case’ and what it can’t concealWords unspoken on first anniversary of Nadiya Savchenko’s captivitySavchenko’s detention illegally extendedOne Birthday Wish on May 11: #FreeSavchenkoInvestigators claim they questioned 108 thousand people over Savchenko caseSavchenko to be hospitalized after tests “raise serious concerns for her health”Yet another charge concocted against Nadiya SavchenkoNadiya Savchenko facing pressure to ‘confess’Savchenko: New charge dismissed as ‘technical mistake’
• Topics / News from the CIS countries 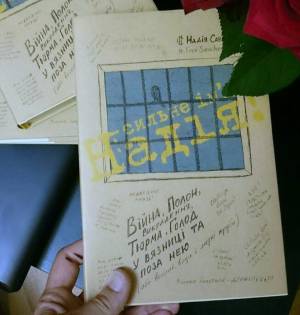 Vera Savchenko has reported that Russian customs officials removed 24 copies of Nadiya Savchenko’s book ‘It’s a Strong Name, Hope’.  The officials initially reacted that the books were ‘extremist’ literature, then opted for ‘suspicious’.  “The illiterate are always afraid of books”, Vera comments.  Others read them, and excerpts of Nadiya’s book, translated by Voices of Ukraine, can be found here.

Vera Savchenko writes that she was bringing her sister’s book into Russia to give to Russians who have corresponded with the former military pilot and now Ukrainian MP who was captured by Kremlin-backed militants in Donbas and kidnapped to Russia.  Savchenko has been held in Russian detention since late June 2014 and her trial which has elicited international condemnation is now continuing far from Moscow in the small Russian city of Donetsk.  She has been recognized as a political prisoner by the Memorial Human Rights Centre, and her release is constantly demanded by all European and international bodies.

Vera writes that the other passengers on the coach were initially indignant when they were held up, apparently for 9.5 hours, at the border crossing at Beryhivka.  This changed, however, when they learned that she was Nadiya Savchenko’s sister.  They chanted “Nadya is Ukraine!”.

On October 13, Vera Savchenko was stopped on the Russian border and informed that she had been banned from entering Russia for the next five years.  She was told by the Russian border guards that the ban was at the initiative of Russia’s FSB or Security Service.

She was not given any paper, a ploy already used by Russia in banning Crimean Tatar leaders Mustafa Dzhemiliev, Refat Chubarov and others from their native Crimea under Russian occupation.  In Vera Savchenko’s case, however, the authorities appeared to back down, possibly due to the international outrage.  The ban meant that Russia was not only illegally holding Nadiya Savchenko and trying her on absurd charges, but was preventing the chief defence witness from testifying.

Savchenko’s lawyer Mark Feygin reports that the witnesses for the prosecution may be heard by the end of this week, and the defence will have their turn.  He anticipates that their presentation of expert assessments, material provided from Ukraine, questioning of witnesses etc. should begin in December.  and take less time.  He notes that very important material, on around 300-400 pages, was collected after Russia’s Investigative Committee stated it had finished gathering evidence.

Importantly, he notes that in cases where the prosecution has tried to respond to professional assessments gathered by the defence by producing fake witnesses, the defence has gone out and got new assessments which expose the lies.

As reported, Savchenko has an unbreakable alibi in that her mobile phone billing proves that she had already been captured and was far from the place where two Russian journalists died on June 17, 2014 when they were hit by mortar fire.  The prosecution has come up with a ‘witness’ who claims that there were technical problems on the day in question, and that the evidence from Savchenko’s phone is therefore unreliable.  This person, Mikhail Pomazan is allegedly an employee of the Life mobile operator.  The defence, however,  have received a response from the company in question saying that they have never had an employee of that name.  The lawyers therefore demanded that ‘Pomazan’ be summoned for cross examination.  Despite the obvious validity of such an application,  the judge rejected it, refused to add the letters the defence received to the file, and the written testimony was simply read out  (See:  Imitating a Trial: Lies & Selective Testimony in the Savchenko Hearings).

That is by no means the only occasion when the judges (Leonid Stepanenko, Ali Khaibulaev and Yevgeny Chernysh) refuse to add material to the case or allow witnesses for the prosecution to conceal information that will expose the fact that they are lying.  Last week, Igor Plotnytsky, leader of the Kremlin-backed militants and a key witness in the case was not only allowed to give evidence behind closed doors, but the defence was prohibited from revealing any details about his testimony and their questioning (see: .

This and numerous other examples indicate that terms like ‘trial’, ‘court’ and ‘verdict’ must be understood very loosely (see: Savchenko’s Kremlin-backed militant captor allowed to give testimony in secret