Nadiya Savchenko’s book confiscated on border as ‘suspicious literature’Savchenko’s Kremlin-backed militant captor allowed to give testimony in secretImitating a Trial: Lies & Selective Testimony in the Savchenko HearingsUseless ’evidence’, managed amnesia & mystery witness in Savchenko trialSavchenko Trial turns into Insultingly Absurd PantomimeSavchenko returned if Ukraine ‘recognizes’ a predetermined sentenceNadiya Savchenko: “You can call me the artillery spotter”Savchenko demands that everybody give testimony using a lie detectorSavchenko trial - 3 judges & only the prosecution’s story allowedSavchenko to be tried in obscure ’military zone’ city 150 km from prisonSavchenko Trial: ‘Fort Knox’ Security and 300 kilometres on the roadNew attempt to keep Nadiya Savchenko trial secretSavchenko material shows how Russia concocted ‘case’ and what it can’t concealWords unspoken on first anniversary of Nadiya Savchenko’s captivitySavchenko’s detention illegally extendedOne Birthday Wish on May 11: #FreeSavchenkoInvestigators claim they questioned 108 thousand people over Savchenko caseSavchenko to be hospitalized after tests “raise serious concerns for her health”Yet another charge concocted against Nadiya SavchenkoNadiya Savchenko facing pressure to ‘confess’
• Topics / News from the CIS countries 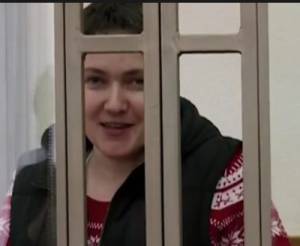 It is Crimean political prisoner Oleksandr Kolchenko’s 26th birthday on November 26, and Nadiya Savchenko, also held illegally in Russia, has sent him and Russia’s Ukrainian hostages greetings from her trial.

Nadiya wishes Sashko [Ukrainian diminutive for Oleksandr] a Happy Birthday, and that this will be his last in captivity. She then mentions also Oleg Sentsov, Gennady Afanasyev and Oleksy Cherniy, imprisoned with Kolchenko on absurd ‘terrorism’ charges, 73-year-old Yury Soloshenko, Serhiy Litvinov, and Mykola Karpyuk and Stanislav Klykh whose ‘trial’ is currently underway in Grozny [Chechnya].

Together we will be victorious, she says, smiling. Glory to Ukraine, Ukraine above all!

PLEASE send greetings to Oleksandr Kolchenko and to Sentsov and Afanasyev!

A week after allowing Kremlin-backed militant leader Igor Plotnytsky to testify in the trial of Nadiya Savchenko behind closed doors, the court has now refused to make his testimony public.  It also rejected the defence’s application to have the prosecutors removed for threats of criminal proceedings against them for posting a photo of Plotnytsky and scant details of his testimony on Twitter.

Plotnytsky was directly involved in Savchenko’s capture in eastern Ukraine and his written testimony is full of contradictions and suspiciously belated ‘remembered details’.  It was therefore imperative that he testify in open court.  Nonetheless, he claimed that he was a public figure and feared for his safety, and although the trial is guarded by a huge contingent of men with Kalashnikov rifles, snipers, etc. the court agreed to not only eject all but the parties to the proceedings, but to even prohibit any recording or details being exposed.

On Nov 26, Savchenko’s lawyer Mark Feygin the defence’s application, saying that they were convinced that Plotnytsky had given false testimony and that this could only be demonstrated through open access to the transcript.

The court does not appear to have given any grounds for its extraordinary rejection of the application.

The prosecutor on Nov 25 had asked that a separate decision be issued over the behaviour of Feygin and Nikolai Polozov in tweeting Plotnytsky’s photo and a few details, and that screenshots from defence lawyer Nikolai Polozov’s twitter account be added to the case.  Polozov understandably asked what this can be called, if not overt pressure.  The pressure, however, continued with presiding judge Leonid Stepanenko stating that a decision on such possible proceedings would be given together with the verdict in the trial against Nadiya Savchenko.  The threat of prosecution is thus hanging over the defence lawyers, and the court is contributing to this.

Such threats have been made before, it should be said, including when Feygin published .  Details, which the court has agreed may be treated as top secret, can be found here  Savchenko’s Kremlin-backed militant captor allowed to give testimony in secret

After first attempting to ban Nadiya Savchenko’s sister and key witness from entering Russia, criminal charges have now been brought against Vera Savchenko.  She is accused of contempt of court during a court hearing linked with the trial of two Ukrainians – Mykola Karpyuk and Stanislav Klykh – underway in Grozny [Chechnya] in which Vera Savchenko has civic defender status.

The treatment of Karpyuk and Klykh, who were held incommunicado for over a year and who still bear the marks of torture, as well as the charges have already been subjected to damning criticism by the Memorial Human Rights Centre.  It would seem that Vera Savchenko expressed rather less formal criticism of the show trial of the two men.  She is accused of having “systematically infringed the rules for holding a court hearing and made unauthorized remarks from her seat”.  According to Grani.ru, the investigators claim that she expressed the view that the person presiding over the proceedings “was not a judge, but a git”.  The charges could carry a sentence of up to 6 months imprisonment, and Nadiya Savchenko’s lawyer Mark Feygin believes that they have been initiated to force her out of Russia.

At the hearing on Nov 25, the third lawyer for the defence Ilya Novikov informed the court of a situation which he said they were encountering for the first time.  “It turns out that we have a fake witness.”  As reported here, there were doubts from the outset about a supposed FSB [security service] officer who gave testimony in disguise on Oct 7.   The person identified as Alexei Pochechuyev appeared on the video in a wig with grey hair, makeup and glasses.   , Savchenko asked Pochechuyev if he could see her well.  He answered that he could.  She promptly put a bag over her head and asked if he could see her face.  He answered that he could.

The defence suspect that since ‘Pochechuyev’ couldn’t remember the questioning which he had signed as having been part of, refused to give his age and appeared in comical disguise, that he might not have been the FSB officer at all.  More importantly, they asserted that his story was complete fiction.

The defence handed the court the assessment given by a handwriting expert of the signatures given by the first and second ‘Pochechuyev’.  The expert concluded that the signatures were almost certainly from different people.

As well as epitomizing the farcical nature of this ‘trial’, this detail is probably of critical importance since Nadiya Savchenko believes the man she saw on the video screen, albeit in pantomime gear, to have been the person in charge of the group who drove her, against her will, to Voronezh.

According to the testimony of the pseudo-‘Pochechuyev’, he is an FSB officer who took her to Voronezh after a traffic police officer detained her near the village of Kantemirovka after she had supposedly voluntarily crossed into Russia.  He claimed that in the car she had told him that she was an artillery spotter.