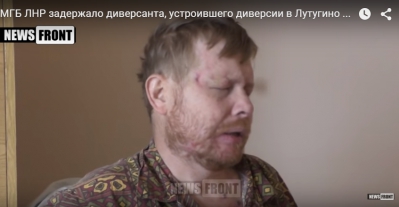 The so-called ‘Luhansk people’s republic’ [‘LNR’] has released a video on which a man ‘confesses’ to having carried out sabotage and intelligence activities for Ukraine’s military. Despite being severely disabled, with both arms amputated, he has clearly been badly beaten and finds it difficult to even speak.

Leonid Pasechnyk, who is referred to as the ‘LNR’ state security minister stated on Nov 25 that they had detained somebody they call a saboteur who had blown up the ground underneath railway lines near Lutuhyne  and an electricity pylon in Khrashchevate.

He claims that as the result of their ‘investigative operation’, they have established that the person is 45-year-old Vladimir [Ukrainian: Volodymyr] Zhemchugov, a Ukrainian national, registered in Krasny Luch, though living in Georgia.  He is alleged to “have carried out several terrorist acts blowing up electricity lines and railway groundwork on the territory of the Republic”.  He supposedly caught the attention of Ukraine’s military and security service [SBU] during his trips to Georgia where his wife lives, and was ‘recruited’ in Kyiv in the Spring of 2015.

The video which in more distressing form corresponds with Pasechnyk’s story was posted by the pro-militant News-Front.  Zhemchugov says that he had openly opposed the overthrow of power in the Luhansk oblast, and had been approached by a person who suggested he actively help the Ukrainian military.  He says that he had initially done this by providing information, but then, at a meeting in Kyiv, was invited to become part of a partisan resistance movement and carry out acts of sabotage.

Pasechnyk says that Zhemchugov was also blinded, and claims that no force was used against him.  It is unclear from the video whether the man can see, but there are marks indicating beating, and he is obviously dazed and in physical distress.  This is two months after the alleged explosion during which time the militant claims that he has been receiving medical care.

The actual story is blurred.  Informator.lg.ua reported back on Oct 1 that two Russian “volunteers” had tried to blow up the pylon, planning to pass it off as carried out by Ukrainians.  Zhemchugov’s date of birth corresponds, but in the earlier report he is called a Russian national.

Pasechnyk reports that “the Kyiv office of one of the international organizations is planning to impact upon the exchange of prisoners of war”.  He notes that there has been an open appeal from his wife, and officers to provide him with equipment and Ukrainian doctors to transport him to Kyiv.

Then, ominously, he states that “work is continuing with Zhemchugov, investigative units of the ministry are working and he is in hospital under the care of doctors”.

The ‘work’ carried out can certainly be seen on the video. What is not totally clear is why the militants have resorted to this grotesque display of their methods now.

Ukrainian MP Iryna Herashchenko reports that Zhemchugov’s wife phoned her very late and totally distraught, having just seen the video.  Heraschenko says that they have been trying to secure Zhemchugov’s release for 2 months now, and that the militants are not allowed the International Red Cross to see him.

This is not the first time that Kremlin-backed militants have openly displayed tortured prisoners like ‘trophies’.  The most notorious occasion was on Ukraine’s Independence Day, Aug 24, 2014, where militants from the self-proclaimed ‘Donetsk people’s republic’ staged a shameful march through Donetsk of Ukrainian prisoners, and a similar display in January this year.  The video footage is generally widely broadcast by Russian pro-Kremlin channels.  Even where physical force has probably not been applied, as in the case of 30-year-old Maria Varfolomeyeva, a Luhansk journalist seized in Jan this year and still held prisoner, the militants and Russian Life News have videoed her being psychologically tormented.

Volunteer Gaide Rizayeva was taken hostage twice by Kremlin-backed militants in Donbas.  “You expect to die every day and live in uncertainty, when the door of your cell opens and you don’t know how the day will end. Last year separatists killed people in front of us so that we would begin telling the truth. A lot of people were killed, many will not now be found”.  She spent 7 months altogether and says she wouldn’t wish that on anybody, but she would like at least one Ukrainian parliamentarian to experience a single day of such captivity. That would surely make them accelerate the exchange of all prisoners, civilian and military.