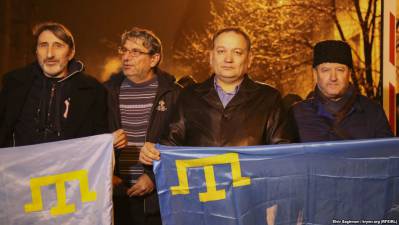 Sergei Aksyonov, de facto leader of Russian-occupied Crimea, has demanded that Ukrainian media “be purged as a class”.  Most have long been driven out, but it seems that a few TV and radio channels can still be accessed in the north of the peninsula, and these must be exterminated.

It won’t fix the electricity pylons whose destruction has plunged Crimea into darkness, but helps deflect attention from the failure of the occupation authorities to prepare for the likely blockade, and from Russia’s inability to provide electricity to the peninsula it claims was always its territory.

There have been more heavy-handed responses to the blackout – some comical, like the de facto prosecutor Natalya Poklonskaya’s initiating of a criminal investigation over destruction of pylons outside Crimea.  Others are more ominous, although after almost two years of Russian occupation, predictable.

The FSB [Russian Security Service] has summoned Safinar Dzhemilieva, wife of the exiled Crimean Tatar leader and Ukrainian MP for interrogation.  72-year-old Mustafa Dzhemiliev has undoubtedly played an important role in the Crimean Blockade, however summonses and interrogations of his wife are, like the illegal imprisonment of his son, Khaiser in Russia, flagrant attempts at intimidation.

The same is true of the FSB visitation on the elderly (82- and 77-year-old) parents of Crimean rights activist Eskender Bariev.    Bariev reports that they have also summoned his sisters, and tells the FSB to lay off his family and quit pretending to search for him.  He is not in hiding, he says, and has never concealed his position.

While Nariman Dzhelyal, First Deputy Head of the Mejlis, or Crimean Tatar representative assembly, says that he is not aware of any major escalation in repression of Crimean Tatars, he does believe it likely that since the occupation authorities can’t touch those carrying out the blockade, they will lash out at those who support it and/ or do not concern their opposition to Russian occupation.   There have been new heavy-handed measures against Ukrainian Cultural Centre activist Veldar Shukurdzhiyev and an absurd administrative case over a peaceful attempt to take photos with the Ukrainian flag back in August appears to have been reinstated.

Dzhelyal says that he himself is not a supporter of such radical measures as the blowing up of electricity pylons, but believes that the Ukrainian government had long needed to take responsibility and prepare measures on resolving the Crimean issue.

Dzhelyal and Bariev point to the entirely specific demands that the blockade initiators have put forward.  Mustafa Dzhemiliev has made it clear that they are not against reinstating an agreement on providing electricity and some trade, but on certain conditions.  Nobody has suggested sitting down and negotiating.  Instead Aksyonov simply calls them terrorists and threatens some kind of asymmetrical response, and Russia is silent about the demands..

It is frustrating that the western media has largely followed suit.  When they do mention the demanded release of political prisoners, they put the term in inverted commas.  This could mean that they are questioning the classification, in contrast to reputable human rights organizations, including the Crimean Human Rights Group, Memorial Human Rights Centre and others.  Or they simply cannot be bothered to do their homework  and this is disturbing since it is not difficult to find information about the grave human rights abuses since Russia invaded and occupied Crimea.

In a recent interview, Mustafa Dzhemiliev insisted on the release of specific prisoners, mentioning imprisoned Crimean Tatar leader Akhtem Chiygoz; Ali Asanov and Mustafa Degermendzhy; Crimean filmmaker Oleg Sentsov, Oleksandr Kolchenko, Gennady Afanasyev, Oleksy Chirniy, Maidan activist Oleksandr Kostenko and others; the formation of a commission to investigate the disappearances and murders since Russia invaded Crimea; the removal of the bans on entering their homeland imposed on Dzhemiliev, Refat Chubarov and others and on permission for international organizations to monitor the human rights situation and “to reinstate those democratic rights which existed in Crimea under Ukrainian rule.”.

Aksyonov’s reaction has been to bluster about purging the few remaining Ukrainian media that the occupation regime did not manage to silence earlier.  The occupation authorities and Russia have again claimed that Dzhemiliev is recruiting for Isis, and that all the blockade activists are ‘criminals’.

In the meantime, the Russian Supreme Court took an indecently short amount of time on Nov 24 to reject appeals against the monstrous sentences passed on Ukrainian filmmaker Oleg Sentsov and civic activist Oleksandr Kolchenko.

Their release has been demanded by the Parliamentary Assembly of the Council of Europe, the European Parliament, etc., yet the upholding of 20-year and 10-year sentences for non-existent terrorism went largely unnoticed.  So too have the retaliatory measures against Gennady Afanasyev because of his retraction of testimony against Sentsov.  All three men have been recognized as political prisoners by the Memorial Human Rights Centre, targeted because of their opposition to annexation.

Memorial has also declared Oleksandr Kostenko a political prisoner, and information is easily found about the surreal trial and imprisonment of a Ukrainian Maidan activist for an unprovable offence in Kyiv before Russia’s occupation.

The same contempt for fundamental principles of jurisdiction and international law can be seen in the ongoing imprisonment of Chiygoz, Asanov and Degermendzhy, as well as armed searches, interrogations, etc. over a pre-annexation demonstration.  What is more, this case is overtly targeting Crimean Tatars. .

There can certainly be differing views regarding the sense, morality, etc. of the blockade and now the blackout, but surely not about the totally reasonable demands made.

If it was Ukraine’s government which failed for so long to react decisively, the international community also bears moral responsibility for basically confining themselves to stern words, with even these scarcely heard of late.  Mustafa Dzhemiliev and other leaders have put forward legitimate demands which can help entirely specific victims of Russia’s occupation of Crimea.  They deserve to be heard.