Odesa 2 May Suspect: We were financed by MoscowVital Probe of Odesa May 2 Tragedy stymied because of questions answered?Movement at last on Odesa 2 May investigationRussia Today, or why Odesa May 2 is different from BaltimoreOdesa May 2 Investigation: A Failed Test for Ukrainian JusticeMore Evidence against Incendiary Lies about Odesa 2 MayContinuing Obstruction of Odessa May 2 InvestigationPropaganda that KillsOdessa May 2 trial turns into farce as Russia continues ‘massacre’ propagandaBad Start to Crucial Odessa May 2 TrialsRussia’s New Odessa FileOdesa "Massacre" Propaganda vs. the FactsDangerous silence over police role in Odessa May 2 eventsWithout Double StandardsWhat Russian TV won’t show about the events in OdessaCVU: Pro-Russian activists sold information about pro-Ukrainian activists in OdessaUHHRU condemns police role in Odessa tragedyWhy are Ukraine’s leaders abetting Russian ‘Odesa Massacre’ lies?Prominent Ukrainian activist Roman Ratushny killed defending Ukraine against Russian invaders Imprisoned in occupied Crimea for opposing Russia’s war against Ukraine
• Topics / Law enforcement agencies

Prosecutor suspected of involvement in Odesa May 2 tragedy 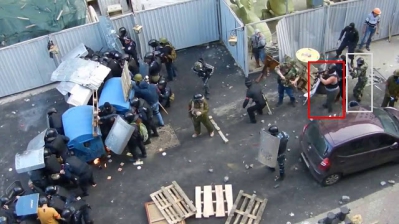 The 2 May Group has challenged Odesa’s Regional Prosecutor to investigate allegations that could implicate one of his employees in the concealment of the weapon used by anti-Maidan activist Vitaly Budko [‘Botsman’] during the violent disturbances on May 2, 2014. This is only the latest disturbing development since there are already strong grounds for believing that Budko was helped to escape by a high-ranking police official.

Ample video footage was available from the outset showing Budko shooting from behind a police cordon, with officers making no attempt to stop him.  The International Advisory Panel, set up by the Council of Europe, recently published a damning report on the investigation into the May 2 events and mentions this scene as an example of the “impression of general passivity” made by the police.  It notes also that “video footage posted on the Internet gave rise to allegations of collusion between some members of the police force and pro-federalism protesters.”

There are two separate videos raising serious questions about the behaviour of Dmytro Fuchedzhy, the former deputy head of the Odesa police who, like Budko, is now in hiding.  At around 17.55,   Fuchedzhy received a slight injury to his hand, but the ambulance doctor insisted that he needed to be evacuated.  In the footage below (from around 1.40) the ambulance door opens, and Fuchedzhy clearly recognizes a person inside who does not give off the impression of being injured.   Fuchedzhy nods and seems to recognize him.  Just as suspiciously, the ambulance does not take a police officer who is clearly badly wounded.  Serhiy Dibrov is one of the journalists in the 2 May Group which formed to carry out a civic investigation into the events.  He was present throughout the events that day, and saw the man inside the ambulance when the door opened.  He is in no doubt that this was Budko.

Budko is believed to have fired the shot which killed Maidan activist and lawyer Ihor Ivanov.  Numerous accounts of the events that day suggest that it was the news of this first death that played a fatal role in the subsequent escalation.

Specialists from the 2 May Group had earlier demonstrated the lack of substance to claims that Budko was shooting blank bullets.  It remained a mystery, however, what had happened to the ‘Vulcan TK’ automatic rifle he used.

On the basis of new photographs that have come to light, the Group now believes that the machine gun was removed from the scene in a car which is registered in the name of an employee of the Odesa Regional Prosecutor’s Office.

The photographs are from Hretska Square and appear to have been taken after 17.00.  On a number of them, you can see a white Niva VA3 2121, parked at the back end of the Bulgarian Cultural Centre.  This was a zone occupied during the confrontation by anti-Maidan activists.  This is easily confirmed, the Group points out, by the St George ribbons and the gear of those surrounding the car.  The car’s driver can be seen both in the driver seat and by the boot with a long-barrelled rifle in his hands. They believe that the weapon wrapped in a bag is a pump rifle. 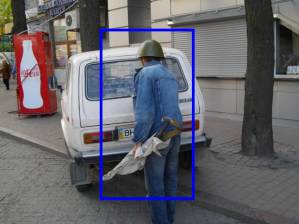 Several photos show a man easily identified as Budko standing next to the car. On one photo Budko, who is no longer holding his rifle, is speaking with the driver.  In a photo shortly after, Budko is clearly visible and, again, without a rifle.

The 2 May Group established that the Niva was registered in the name of a current employee of the Regional Prosecutor’s Office.  The person claimed that he had earlier sold the car to an old acquaintance via a general power of attorney.

He claimed to know nothing more about the car, although it remains unclear in that case why he did not simply sell it outright, getting his name removed altogether from the registration papers.

While the prosecutor’s office employee may be telling the truth, and his name is rightly not given, the 2 May Group points out that the person he allegedly sold the car to, Mikhail Surikov, was one of the leaders of the anti-Maidan [or pro-federalist] tent camp on Kulikovo Pole.  After the separatist protests in the city failed, he fled to Donbas where he became a fighter in the Prizrak battalion of the so-called ‘Luhansk people’s republic’.

The prosecutor’s office employee is also an avid collector of firearms, with at least 12 weapons  officially registered in his name, including a rifle and pump rifle.

The May 2 Group believes that the Niva was used to take away the weapon used in at least one killing and has publicly addressed specific questions to the Regional Prosecutor David Sakvarelidze,   They ask:

how a car registered in the name of a serving employee of the Regional Prosecutor’s Office should have been in the epicentre of the mass riots, driven by Surikov, a well-known anti-Maidan activist;

how many weapons are officially registered in the employee’s name, and what kind of firearms they are;

whether from 2011 to 2014 the said employee cancelled his registration on specific firearms, selling them to others;

whether he had the opportunity to influence the course of investigative operations into the events on May 2.

It should be stressed that the International Advisory Panel’s assessment of the authorities’ investigation into the events of May 2, 2014 was damning, with the overall conclusion being that no progress has been made.  Doubts were expressed about possible conflict of interest, and about the motivation of law enforcement bodies to identify those responsible for the deaths and injuries that day and bring them to justice.