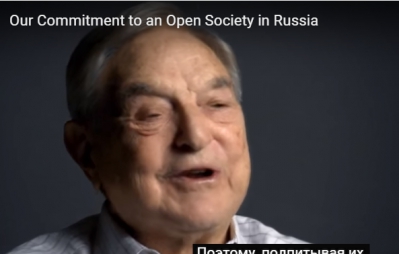 The official notification claims no less than that “the activities of the Open Society Foundation and the OSI Assistance pose a threat to the foundations of the constitutional system of the Russian Federation and state security”.

The decision, it says, was taken in accordance to the appeal from the Federation Council to check organizations included in the so-called ‘patriotic stop-list’ adopted on July 8 this year.

The Open Society Foundation was founded by George Soros, and states that “it works to build vibrant and tolerant societies whose governments are accountable and open to the participation of all people”.  It is not considered in other countries to be seditious, aimed at undermining the constitutional order or in any way a threat to state security.

Nor, however, is the Crimean Human Rights Field Mission, which was also added to the ‘patriotic stop-list’ back in July this year.  This effectively made its vital work in informing of rights violations in Russian-occupied Crimea illegal, and placed all staff in danger of criminal prosecution.

As reported, the Federation Council, Russia’s upper house of parliament announced in July that it had drawn up a list of 12 organizations for a ‘patriotic stop list’ of foreign NGOs deemed ‘undesirable’ in Russia.  Konstantin Kosachev, head of the Federation Council’s committee on international affairs, described the organizations on the list as “foreign or international nongovernmental organizations known for their anti-Russian bias”.  He indicated that other NGOs were likely to be added to the list.  “We want to defend Russian civic society from outside manipulation”, he stated.

The list, however, was supposed to be of a “preventive nature” and an open document which could change, presumably if the said NGOs repent of their “anti-Russian” ways.

The law on ‘undesirable organizations’ was passed in its third and final reading on May 19. It allows the Russian authorities to ban any foreign or international NGO deemed  to threaten ‘state security’, ‘national defence capacity’, “public order and the health of the population” or ‘constitutional order’.  The law’s authors claimed that the extremely broad scope provided by legislation against terrorism and ‘extremism’, as well as that on labelling NGOs ‘foreign agents’ did not go far enough.

Valentina Matveyenko, head of the Federation Council, claimed in July that the stop list would enable the work of the NGOs on it to become more “transparent and understandable”.  The dishonesty was pronounced, since the work of any organization declared ‘undesirable’ becomes impossible and any Russians working for them in breach of Russian law.

NGOs declared ‘undesirable’ are not allowed to transfer money to Russia, open representative offices in Russia or carry out programs. There is also a ban on circulating of information from such organizations.

There are steep fines for individuals, officials or legal entities taking part in the activities of an ‘undesirable NGO’, with a repeat ‘offence’ of the relevant article of the Code of Administrative Offences within a year leading to criminal liability. Those running the NGO face immediate criminal liability, with the ‘offence’ carrying a sentence of over 5 years.

According to the law, an NGO which is deemed ‘undesirable’ has its accounts frozen and all subsidiaries are closed.   Any foreign nationals deemed to be taking part in the activities of such an NGO will be prohibited from entering Russia.

The Open Society Foundation’s eloquent statement regarding its commitment to open society in Russia can be heard here.