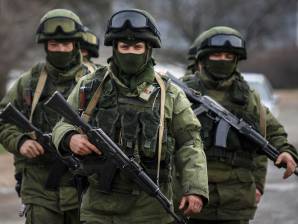 Update: The bill was indeed given fast-track treatment and adopted in full on Friday, Dec 4.

Russia’s parliament has moved closer to allowing the Constitutional Court to decide that international court rulings can be flouted if they are deemed to contradict Russia’s Constitution.  Since the very law is in breach of this same Constitution, there seems every reason to suspect that the law will be invoked whenever Moscow does not wish to comply with international law.

Russia’s invasion and annexation of Crimea demonstrated the Kremlin’s attitude to international norms, and this law would doubtless be used to try to avoid the legal suits and massive settlements likely to be awarded over that act of aggression.

The bill on giving Russian Constitutional Court the right to declare it ‘impossible’ to implement international court rulings on Russian territory was passed in its first reading on Dec 1, with only 3 deputies voting against, and one abstaining.  This bill is being pushed through at record speed, and already on Dec 2  RBK reported that the Duma’s constitutional committee has recommended its adoption at second reading.  If the bill passed in its first ruling speaks of rulings from international court bodies, for its second the word ‘court’ has been removed.  How much that will change anything in practice remains to be seen, but it would in principle enable the Constitutional Court to also override decisions from, for example, the UN Human Rights Committee.

Most disturbingly, the bill purports to be implementing a judgement passed by the Constitutional Court on July 14 which stated that “Russia, as an exception, may derogate from execution of its obligations if such a derogation is the only possible means of avoiding infringement of fundamental constitutional principles”.

The Court stated that the European Convention and the European Court of Human Rights judgements based on it are subject to implementation only on condition that they comply with the higher legal force, namely the Constitution of the Russian Federation.

The judgement was in response to a submission from MPs asking the court to determine the compliance with the Constitution of several provisions of the law ratifying the European Convention, and others.  The court acknowledged that the law had not been in breach of the Constitution.

Moscow undoubtedly does not like the 50 billion dollar bill it has to pay Yukos shareholders in accordance with a ruling from the Court of Arbitration or the nearly 2 billion according to an ECHR judgement.  The Constitutional Court denied that this had anything to do with its judgement, and certainly the law is not retroactive.  That said, Russia has still not paid any of the amounts owed.

According to Anne Brasseur, President of the Parliamentary Assembly of the Council of Europe, Russia “has not yet fully implemented nearly 1, 500 judgments, many of which concern particularly serious human rights violations and/or complex structural problems.”  She stressed that implementation of ECHR judgements is a legal obligation binding on all parties to the Convention and that there cannot be any “selective implementation”.

This is not the view of Russia’s parliamentarians.  Their zeal in passing this bill through the relevant stages, as well as the reports on it in the Russian media leave no doubt that it is seen as a way of bypassing the European Court of Human Rights.  Opposition MP Dmitry Gudkov writes that he tried to explain to the Duma why the bill will have disastrous consequences, why investors will run even further from Russia, but to no avail.  This was the kind of remark he heard:

“Surely nobody’s against our Constitution being the most sovereign ?  There in ECHR they pass any rubbish, there’s legal erosion and politicization!”

The MPs, who are not known for opposing any bills supported in the Kremlin and who probably feel safe enough, were impervious to Gudkov’s argument that rejection of the priority of international law could backfire on them.  There is no justice to be expected from a Russian court, unlike from ECHR, Gudkov argued, but to deaf ears.

In the Russian Federation and also in Russian-occupied Crimea, the bill would be a grave blow to any hopes of justice.

Submissions regarding judgements ‘impossible to implement’ would come from Russia’s President, the government or the Justice Ministry.  Perhaps the Constitutional Court would be sparing in how often it claimed that judgements from internationally recognized courts were ‘unconstitutional’, but the possibility would always be there.

With respect to Crimea, and the fundamental violations committed through the armed seizure of power and forced annexation, as well as subsequently, rejection of international justice seems guaranteed.  As well as a general application from Ukraine, there are numerous individual applications currently awaiting consideration by the Court in Strasbourg.  They include those lodged by Crimean Tatar leaders Mustafa Dzhemiliev and Refat Chubarov over Russia having banned them from Crimea under Russian occupation.  In those cases and others, Russia banned them as Ukrainian nationals.  In the case of Ukrainian nationals from Crimea Oleg Sentsov, Oleksandr Kolchenko, Gennady Afanasyev, Oleksandr Kostenko and Mustafa Dzhemiliev’s son, Khaiser, Russia is claiming that they ‘automatically’ became Russian nationals in order to illegally hold them prisoner in Russia.

Russia’s Supreme Court recently upheld a three-year sentence against Russian Tatar activist Rafis Kashapov who was convicted in part of having made “public calls to violate Russian territorial integrity”.  This was how one of the two highest courts in the land interpreted Kashapov’s criticism of Russia’s annexation of Crimea.  The other’s judgement on Russian priority over international law is an equally cynical blow to rule of law in Russia.