Russian court refuses to reveal testimony from Nadiya Savchenko’s militant captorNadiya Savchenko’s book confiscated on border as ‘suspicious literature’Savchenko’s Kremlin-backed militant captor allowed to give testimony in secretImitating a Trial: Lies & Selective Testimony in the Savchenko HearingsUseless ’evidence’, managed amnesia & mystery witness in Savchenko trialSavchenko Trial turns into Insultingly Absurd PantomimeSavchenko returned if Ukraine ‘recognizes’ a predetermined sentenceNadiya Savchenko: “You can call me the artillery spotter”Savchenko demands that everybody give testimony using a lie detectorSavchenko trial - 3 judges & only the prosecution’s story allowedSavchenko to be tried in obscure ’military zone’ city 150 km from prisonSavchenko Trial: ‘Fort Knox’ Security and 300 kilometres on the roadNew attempt to keep Nadiya Savchenko trial secretSavchenko material shows how Russia concocted ‘case’ and what it can’t concealWords unspoken on first anniversary of Nadiya Savchenko’s captivitySavchenko’s detention illegally extendedOne Birthday Wish on May 11: #FreeSavchenkoInvestigators claim they questioned 108 thousand people over Savchenko caseSavchenko to be hospitalized after tests “raise serious concerns for her health”Yet another charge concocted against Nadiya Savchenko
• Topics / News from the CIS countries 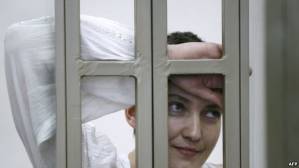 “Something tells” Vladimir Markin, official representative of Russia’s Investigative Committee, that the sentence passed on Ukrainian ex-pilot and MP will be ‘harsh’.  This something (or somebody) obviously allowed him to flagrantly ignore fundamental principles of a fair trial and pre-empt the court in declaring Savchenko guilty.  Markin  stated that he expected a harsh sentence “because those crimes that Nadiya Savchenko committed are clearly regulated by Russian Federation legislation since the crime was committed against Russian citizens”.

Markin’s remarks are not the first time that Russian officials have demonstrated that  the proceedings against Savchenko have nothing in common with a court of law.  Russia’s Justice Ministry has twice stated that Savchenko’s ‘extradition’ can be discussed if Ukraine recognizes the verdict passed by a Russian court and guarantees that she would serve her sentence in Ukraine.   Ukraine’s Justice Minister Pavlo Petrenko responded by pointing out that a statement like this before a verdict has been handed down “demonstrates one thing alone, that the verdict has already been written, and that it will definitely be a conviction.”

The prosecution responded by coming up with a ‘witness’ who claimed that there were technical problems on the day in question, and that the evidence from Savchenko’s phone is therefore unreliable.  This person, Mikhail Pomazan is allegedly an employee of the Life mobile operator.  The defence, however,  have received a response from the company in question saying that they have never had an employee of that name.  The lawyers therefore demanded that ‘Pomazan’ be summoned for cross examination.  Despite the obvious validity of such an application,  the judge rejected it, refused to add the letters the defence received to the file, and the written testimony was simply read out.

This was only one of numerous occasions over the past months where the judges in this case (Leonid Stepanenko, Ali Khaibulaev and Yevgeny Chernysh) have appeared to work in collusion with the prosecutor.

A particularly outrageous example of this was seen in the permission given to key witness and militant leader Igor Plotnytsky to give his testimony in secret, with the defence not allowed to reveal any details.

Markin’s pronouncements were undoubtedly out of order, but hardly surprising, since nobody genuinely believes in an acquittal in this travesty of a ‘trial’.

If Savchenko is found innocent of ‘illegally crossing the border’, then Russia must explain why, after being captured by Kremlin-backed militants in Ukraine,   she was taken across the border into the Voronezh oblast, held prisoner by armed guards in the Euro Hotel, and visited every day by Investigative Committee ‘investigator’ Dmitry Manyshin.   Russia would have to find good reason for having effectively imprisoned for 18 months a Ukrainian MP and delegate to the Parliamentary Assembly of the Council of Europe [PACE].  And this when she has an unbreakable alibi and where there is no evidence backing the Investigative Committee’s claims.

Nadiya Savchenko has warned that “she will resume her hunger strike after the verdict goes into effect but it will be a dry hunger strike - this time without water.”

The verdict is likely around Dec. 24.  While the Kremlin may indeed be hoping to time it around Christmas to minimize attention, it cannot seriously be expecting a heavy sentence on a PACE delegate whose release has been demanded by all democratic countries and European structures to go unnoticed.