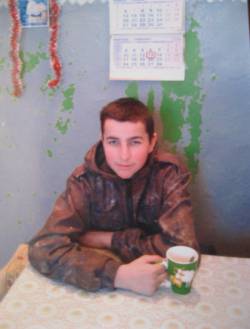 16-year-old Vitaly P. died on Nov 25 from horrific injuries inflicted by staff of the Belorechensk prison colony [Krasnodar region in Russia] during an orgy of beating the previous night.  He was one of seven young lads who had just arrived at the so-called ‘educational’ prison colony.  All were beaten, but according to witnesses the prison staff showed particularly brutality to Vitaly whom they referred to as  “banderoviets” [from the name of the Ukrainian nationalist Stepan Bandera and a term heard constantly in the pro-Kremlin media], as well as an insulting term for Ukrainians.  “One of them trod with his boot on his neck, another jumped on his head with full force”, another young prisoner reported.

All seven young lads ended up in hospital, where Vitaly died the next day.  According to human rights lawyer Alexander Popkov who is representing Vitaly’s family, had the hospital not become involved, it is likely that the prison administration would have tried to conceal the real cause of Vitaly’s death.

Reports in the independent Russian media all say that Vitaly’s parents have had enormous trouble getting any information and they were put under pressure to agree to Vitaly’s burial in Krasnodar.  It is probably thanks to Popkov’s presence and media attention that they were finally given his body and have left for Ukraine to bury him in his native Hrushove, in the Transcarpathia oblast.

Every aspect of this story is horrific, not least the indication from prisoners that such treatment of new arrivals is standard.  Popkov confirms that there have been reports for some time from prisoners of this monstrous “registration through beating”.  He had just been warned, he said, that the prison was planning to claim that Vitaly had died after jumping out of the window.

According to Novaya Gazeta correspondent Yevgeny Titov, Vitaly’s mother, Svetlana, is from Kuban, but married a Ukrainian, Ivan at the end of the 1980s and they lived in Hrusheve.  They were forced by poverty to move to Kuban five years ago, but Vitaly initially remained in Ukraine.  He joined them only last summer, and tried to help them make ends meet with their small tiling business.  His father became ill and needed an operation for which there was no money.

His parents say that they don’t understand how Vitaly who was a quiet young lad could have ended up involved in a robbery.  Neighbours suggest that he got in with a bad crowd, however what exactly is meant when they say that “he took the blame on himself” is worryingly unclear.

Even if he did commit the crime, he was 16 with no past record, and with a family situation which should surely have been viewed as extenuating circumstances.

It was not, and Vitaly was immediately sentenced to 4 years and 8 months prison colony.

Ivan and Svetlana saw their son for the last time in the SIZO or remand prison in Novorossiysk on Nov 10.  According to his mother, Vitaly knew that he could expect to be beaten as soon as he arrived, with this seemingly common knowledge.

This time the beating ended in a death, recorded by hospital staff and so criminal proceedings have been initiated against six officials, five of whom are apparently in custody.  If the accounts given, presumably by the victims who survived or other prisoners, are correct then a significant number of other members of staff, including the psychologist, must be considered complicit.

The investigators state that the 6 individuals inflicted multiple blows and kicks to various parts of the body.  Their victims had only just arrived at the prison at around 1 a.m.  The investigators claim that the torture took place from 2 to 4 a.m., though human rights activists from the public monitoring committee (who have the right to visit prisoners) have been told that the beating only stopped at 5 a.m.  The lads were given an hour to sleep, before being taken to the ‘psychologist’ Irina.

Journalists from Moskovsky Komsomolets spoke with Popkov and human rights activists, and were able to report more details, including about the so-called ‘psychologist’.  She was clearly aware of what the lads had just been subjected to, and asked them: “Well, how do you like it here?”

One of the lads explains that on their arrival, they were taken to the quarantine unit, examined and told to go into the shower room and undress, supposedly to take a shower.  Instead, several men in masks and with batons appeared and began beating and kicking them all over.

They forced them to do press-ups and sit-ups, and those who couldn’t continue, were beaten.  They were threatened with rape and insulted, with all of this taking place in the pressure of around 6-7 other members of staff, in uniform and not wearing masks.

“Some lost consciousness from the blows to their head but were doused in cold water and again forced to do press-ups or beaten. A prisoner called [Vitaly] was beaten the worst.  The staff called him “banderoviets”, “khokhol” [insulting for Ukrainian].  He asked them: “Don’t’ hit me, enough, enough”, but they continued beating him. They stood on his head, and pressed down on it with their feet, threatening that they’d forced him “to eat shit and clean the toilet”.  All of the others, except Vitaly, who had lost consciousness and couldn’t go anywhere, were taken after the beating to get their hair cut. Then they were allowed to take a shower and get dressed.”

The mother of a 17-year-old, sentenced to 3 years, of which he has already served one and a half years, seemingly in a SIZO [remand prison], had not even known that her son had been moved until they received a phone call from the public monitoring committee.

All are frightened to give their names in case their sons face reprisals.

They are right to fear since none of this would have come to light but for the horrific death of 16-year-old Vitaly who had been sentenced to almost 5 years for a theft and was beaten to death in a Russian ‘educational prison colony’.