Ukraine is ahead of the EU in terms of religious tolerance, Ukraine’s Mufti says 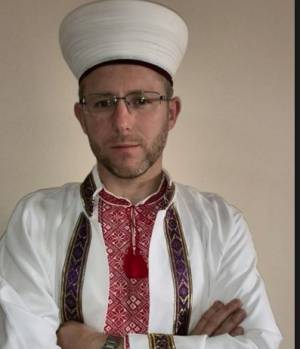 Ukraine is unique, according to Said Ismagilov, Mufti of the Spiritual Directorate of Muslims of Ukraine, in that Muslims have been integrated into Ukrainian society for over a thousand years.   Unlike in western countries where most Muslims are migrants who have come over the past 50-70 years and “have not yet adapted to a new mentality, new conditions and culture, Ukrainian Muslims from generation to generation, living here for over a thousand years, have fully adapted.  We could share our experience of how you need to live in a non-Muslim country.”  For Ukrainians in general, religious values are of great importance and Muslims could valuably contribute their advice on how to successfully integrate into society.

Said Ismagilov adds, however, that the main thing is for time to have passed.  He was talking to Hromadske Radio less than two days after the attacks in Paris and stressed the importance of bringing up Ukrainian Muslims – at home, in schools and mosques in such a way that they will not be drawn to terrorism and radical ideas.

Ukraine, a country with a large percentage of believers, is fortunate in having representatives of all faiths who are deeply committed to inter-faith dialogue and to Ukraine.  This has been especially pronounced since Russia’s aggression first in Crimea, then in Donbas.

Said Ismagilov has been at the forefront of such dialogue and was one of the organizers of an international roundtable on the future of Christian – Muslim relations in Europe in the context of current migration processes.  The event, held in Kyiv on Dec 3,  brought together Muslims, representatives of the Orthodox Church of the Kyiv Patriarchate and the Moscow Patriarchate, of the Ukrainian Greek-Catholic and Roman Catholic Churches, and members of different Protestant Churches, as well as participants from other countries, including Germany, Holland and Poland.

The consensus from the Ukrainian side was that Ukrainian Christians and Muslims, including internally displaced people (IDP) and immigrants demonstrate willingness for dialogue and lack of conflict.  They note, however, that the credit for this lies in believers themselves and religious experts, with the government as yet not having formulated its religious policy.

According to the civic initiative CrimeaSOS, around half of the 22 thousand Crimeans forced to leave their homes after Russia invaded and annexed Crimea are Muslims.  CrimeaSOS lawyer Victoria Savchuk said that she was not aware of any cases of xenophobia against Crimean Tatars.  She told Radio Svoboda’s Crimean Service that for the moment both the authorities and the local population, for example, in Kyiv and Lviv, “understand that the Crimean Tatars are our brothers, patriots who are upholding Ukraine’s integrity and independence. ».

There have been difficulties as well, though of a cultural nature.  Taisa Haida spoke to Radio Svoboda about some of the misunderstandings that arose after a group of Salafi Muslims who are particularly strict in following Muslim precepts arrived in the Vinnytsa oblast.  People were welcoming, but are accustomed to visiting as a family and expressing their respect by bringing a bottle.  The Muslims not only don’t drink, but are also not accustomed to inviting people they don’t know well to their homes.  It is also standard for men and women to sit separately.

This led to a fight and the decision by the village head to not extend the IDPs’ temporary registration.  It seems that the conflict is being followed by the OSCE’s special monitoring mission, and volunteer lawyers are helping the Crimean Tatars.  Local activists believe that the answer lies in people learning more about one another and their religious traditions.  The Vinnytsa City Council has allocated a building for a Crimean Tatar Cultural Centre, though for the moment repairs are still needed.

Enver Kadyrov, a Crimean human rights activist, stresses that it is up to the authorities whether xenophobic incidents based on everyday disputes are allowed to turn into inter-faith conflict.

Frustration was expressed by Mykhailo Yakubovych, a translator of the Koran into Ukrainian, that even the loss of Crimea and parts of Donbas where a lot of Muslims live (or lived) has not prompted the government to formulate its position with respect to Islam.  Others also noted that the main role in building inter-faith harmony is played by religious experts and members of religious communities.

Said Ismagilov agrees, noting that in this respect Ukraine falls behind other European countries.  There Muslims’ needs with respect to places of worship are not ignored, whereas in Ukraine it’s “virtually a feat” to build a mosque.

On the other hand, he believes that despite its officialdom’s failings, Ukraine is ahead of Europe in its building of inter-faith harmony.  He says that there is no Islamophobia in Ukraine or enmity towards Muslims, including those who have come to the country as immigrants. “It’s very easy in Ukraine to hold dialogue.  We don’t have any ghettos and there are no acts of terrorism”.

None of the above, unfortunately, applies to either Crimea under Russian occupation or the areas under Kremlin-backed militant control.  See, for example,