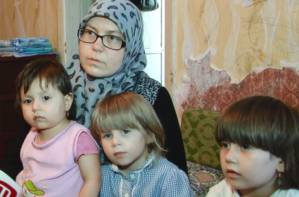 Meryem Zeitullayeva, whose husband Ruslan has been arrested, and their three children

4 Crimean Tatars are jailed in Russian-occupied Crimea and facing heavy sentences for involvement in Hizb ut-Takhrir, an organization that is legal in Ukraine and other countries.  It has been labelled ‘terrorist’ by Russia, but without any evidence provided of terrorist activities.  .

Human rights lawyer Emil Kurbedinov informed on Dec 10 that the FSB in Sevastopol has concluded its investigation, and passed the material for the defence to read.  Kurbedinov has previously noted that there is no evidence that all of the men were even members of Hizb ut-Takhrir, nor that any of them committed any crimes.  He has been illegally prevented from representing three of the four men, and quite grotesque methods are being used to frighten people from attending the detention hearings.

The respected Memorial Human Rights Centre has pointed out that Russia’s Supreme Court in 2003 prohibited His ut-Takhrir as ‘terrorist’ without demonstrating any evidence of terrorist activities, and calls this obvious grounds for considering the decision to be unwarranted.  It has accordingly found all those convicted of ‘terrorism’ for their involvement in Hizb ut-Takhrir, which it calls a non-violent  to be political prisoners.

Three men –Nuri Primov; Rustem Vaitov and Ruslan Zeitullayev – were arrested in January and charged with organizing and / or taking part in the activities of Hizb ut-Takhrir.  On April 2, the FSB first carried out a search of the home of Ferat Saifullayev, then arrested him on the same charges of involvement in Hizb-ul-Tahrir

The men are all charged under Article 205 § 5 of the Russian Criminal Code (organizing / participating in a terrorist organization).  29-year-old Ruslan Zeitullayev, father of 3 small children, seems to have been accused of organizing what only Russia calls a terrorist organization, and could face a sentence of 15  years, the others up to 10 years.

The FSB turned up at Zeitullayev’s home at 6 a.m.  His wife Meryem first went to the door and was told to call her husband as some neighbours were in difficulty and needed help.  Quite unsuspecting, he came and opened the door, only to be forced to the floor with his hands behind his back, then taken away.

Who knows?  Russia invaded and occupied Crimea and declared the legal and non-violent transnational Muslim movement Hizb ut-Takhrir a ‘terrorist organization’, then arrested four men who could face very long sentences.  No details have been given of any actual crimes.

Russia’s Sova Centre has on many occasions protested against such blanket prosecutions.  A recent study by the UK think tank Chatham House notes that Hizb ut-Takhrir is one of the movements which “tends to avoid violent means and instead may focus on social work, education and dialogue initiatives. The Russian government has consistently used repressive measures against both insurgent and gradualist transnational Islamic groups. This has been controversial and at times counterproductive. “

Abdureshit Dzhepparov, member of the Contact Group on Human Rights in Crimea is convinced that such arrests are an attempt to intimidate Muslims and give other Crimeans the idea that Muslims are a danger to others.

Overt intimidation and circus court proceedings

There is no reason for this case to be held in secret, but the prosecution and enforcement bodies are going all out to threaten those seeking to even be present at the detention hearing, including the men’s lawyer.

In fact, Kurbedinov was removed from the cases of three of the four men, the claim being that “the interests of his clients contradicted one another”.  The investigators did not explain this, nor provide the formal decision which could be appeal.  Kurbedinov is clearly continuing to follow all the cases but is formally only representing Ruslan Zeitullayev.

Kurbedinov described the circus at the last court hearing on Nov 10 which extended the men’s detention for a further 2 months.

FSB [Russian security service] officers tried to foist summonses on each of the people standing in the corridor wishing to attend the hearing.  By thus treating them as ‘witnesses’, they could prevent them being present in the court and, of course, try to intimidate them.

They miscalculated with most of their targets.  Nariman Dzhelyal, First Deputy Head of the Crimean Tatar Mejlis or representative assembly « of course’ refused to sign the document thrust in his face  « You’re not the Russian postal service, are you ?”, he asked the official, and advised him to send his summons by post and then they’d have something to talk about.

There was even a woman wandering around with a video recorder, openly videoing all those wishing to attend the hearing.  She initially pretended to be a journalist, but was forced to show her police ID.

Dzhelyal, Kurbedinov and all those present say that they have never seen anything like this for the astounding level of lawlessness.