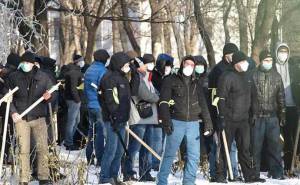 A Kyiv court has sentenced Azis Tagirov to 4 years imprisonment for his role in an attack on Automaidan activists and an abduction, while Ramil Islamli received the same four years but with a three year term of probation. The two ‘titushki’, or paid thugs, were part of a Kharkiv armed gang led by Tavakul Ragimov, a police officer now in hiding

Tagirov and Islamli were convicted of involvement in an attack on Automaidan activists on Jan 21, and of the assault and abduction of a young Kyiv resident that same evening near the Petrivka Metro Station.  The young man who was not, in fact, a Maidan activist, was knocked to the ground and beaten up before being dragged into a bus and taken away. He was interrogated about alleged involvement in Euromaidan, about Maidan leaders, etc.  The titushki threatened and beat him up, first in the bus and then at a titushki camp on the outskirts of the city.  It was only after several hours that they decided he wasn’t a Maidan activist and released him. 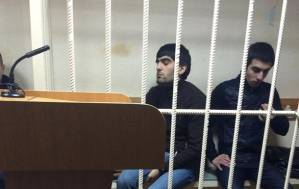 Pavlo Dykan, one of the lawyers representing Maidan victims, that the court also ordered Tagirov to pay 40 thousand in compensation to one victim, and, together with Islamli, 10 thousand compensation and 1.5 thousand in damages to another.  He and another of the lawyers, Svitlana Holub, welcome the rulings from the Obolon District Court, which Dykan believes to be the first real sentence passed over crimes against Maidan activists.

Nothing has been easy.  Dykan notes that the case was in fact terminated, but they managed to get the investigation restarted and passed to the Department on Special Investigations.  It was with the formation of this department late in 2014 that some progress, albeit slow, has been made.

There have, however, been greater problems.  As reported, another suspect is in hiding after being released from custody in July this year despite objections from the prosecutor and victims’ lawyers.

Tavakul Ragimov was a serving police officer who had not even been suspended from his job in the police force. It appears to have taken his flight from justice to have prompted his dismissal.

Ragimov was accused of having led the ‘Oplot’ gang of ‘titushki’ believed to have been behind a number of abductions; assaults; torture; robbery; and threats to kill in Kyiv during Euromaidan.

He is on the wanted list and, if caught, will be charged (at least) over the same two incidents as Tagirov and Islamli.  According to Dykan, Ragimov and his relatives had pressurized and intimidated witnesses and victims throughout the pre-trial investigation.  Likely attempts to put pressure on witnesses are one of the grounds in Ukrainian law for holding a person in custody.  Yet in July Judge Kateryna Sereda from the Pechersky District Court in Kyiv released him from custody with the only stipulation being that he remained at home during the night. Dykan also pointed out that during the investigation, Ragimov, in his capacity as police officer, had access to databases and operational information.

While the first real sentences are to be welcomed, they come after over two years, during which two key suspects have been allowed to escape justice and other obstructions have been constantly placed in the way of a proper investigation.