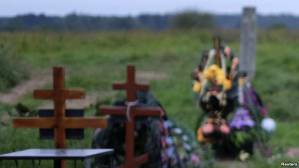 Human rights activists are demanding an official answer about the death of 159 Russian soldiers, and particularly note the sharp increase in unexplained deaths during the second half of 2014.  The increase coincides with reports of Russian deaths in Donbas and of a major escalation in Russia’s military engagement in eastern Ukraine.

Rights activists have been forced to use only alternative open sources, since there has been no official information published on military deaths since 2010.  Valentina Melnikova from the Union of Committees of Soldiers’ Mothers stresses that the actual number of deaths is always higher than the military prosecutor’s statistics.  She points out also that because of the increased number of contract soldiers, rather than conscripts, there has been a decrease in recorded cases of suicide, murder and fatal accidents.  All the more reason, she adds, to find out why there was such a sharp increase in deaths in 2014.

Or at least to ask the question, since the scale of Russia’s military engagement in Ukraine, particularly from August 2014, is denied only by Russia itself.

The question, however, is welcome especially given Russian President Vladimir Putin’s decree of May 28 which classified all information about Russian military losses during “special operations in peacetime”, without providing any definition of ‘special operations nor any clarity as to what information is to be concealed.

The lack of foreseeability is doubtless deliberate, with even lawyers, let alone journalists and civic activists, unsure what information could be deemed by the FSB [security service] to constitute a ‘state secret’ and lead to a person being prosecuted if they divulge it.

Sergei Krivenko, from the Human Rights Council, an advisory body under the President, has told RBK that he and colleagues will be asking Russia’s Investigative Committee and the Chief Military Prosecutor’s Office to carry out a more thorough investigation into the death of 159 Russian soldiers from Jan 1, 2014 to July 30, 2015.   The figure only concerns those cases which have gained publicity.

In the absence of official information, the rights activists have compiled their own list, choosing only the most definite cases.  In most of these, they know the name, the soldier’s military unit, and have confirmation of their death from relatives or law enforcement bodies.

Krivenko stresses that they have probed only cases where the deaths were of serving officers.  After a surge of reports in late August of the death of a large number of Pskov paratroopers dying in Donbas, and of soldiers, including conscripts being forced to go to eastern Ukraine, pro-Kremlin TV showed a couple of funerals of men who had allegedly gone as volunteers to fight in Ukraine (See: First reports on Pro-Kremlin TV of Russian soldiers killed in Ukraine).

Of the 159, the circumstances of only 79 deaths are known and only in 38% of the cases is there any information about a check being carried out by the military prosecutor’s office.

The activists’ probe uncovered an anomalous situation in the second half of 2014.  Krivenko explains that the Russian army then lost at very least 108 men (68% of the total number over the year and a half in question).  In the vast majority (80%) of cases, there is no clear information as to how the men died, or of any check having been carried out.  This is quite unacceptable for peacetime, Krivenko stresses.

RBK notes that the surge in numbers coincides with reports of soldiers dying in eastern Ukraine.  In September it sent a formal request for information to the Defence Ministry about over 10 soldiers from different units.  The Ministry did not reply, though it is legally obliged to do so.

All kinds of deception was applied.  In the case of the Pskov paratroopers, first reported by Lev Shlosberg, there were even attempts to deny their deaths, with fake social network entries added  (See: Russian soldiers’ deaths in Ukraine: A web of lies and fake social network pages).

There have also been repressive measures against those activists who probe the deaths:  Soldiers Mothers of St Petersburg was labelled a ‘foreign agent’ just days after it announced its probe.  Lev Shlosberg was brutally attacked within days of reporting the deaths of Pskov paratroopers, while 74-year-old Soldiers’ Mothers activist Ludmila Bogatenkova was first remanded in custody on absurd charges and only released when it became clear that she would likely die in remand prison.  She was still convicted in a case clearly intended to provide a lesson to other activists.

Soldiers have also been jailed, effectively for refusing to fight in Donbas.

Krivenko insists that the aim of their report is not to prove that Russian soldiers have taken part in the military action in Ukraine.  For them it is more important that the rights of the soldiers and their families to an objective investigation are observed, and, if necessary, to bring those guilty to answer.

This is indeed important, but accountability is vital when it is the leaders of the country who are causing the death of soldiers in an undeclared war on another country’s territory.  And when they are claiming that such information is a ‘state secret’.