Russia’s crimes in Crimea, not ending sanctions, should be on the West’s agenda, 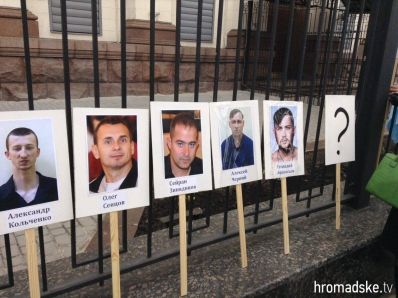 Oleksandr Kolchenko, Oleg Sentsov and others imprisoned since Russia invaded and annexed Crimea (protest in Kyiv on Dec 10)

Nobody knows how many people vanished without a trace after Russia invaded and annexed Crimea, nor even how many are currently in detention awaiting politically motivated show trials.  Some few political prisoners, like Crimean filmmaker Oleg Sentsov, are often mentioned, while others, and there are a number, scarcely at all, although their names are known, as are details of their thoroughly lawless prosecutions.

There are certainly other parts of the world where rights are violated on a far greater scale. None, however, in a country which 21 years ago was given clear and binding guarantees of security from Russia, the USA and Great Britain.  In accordance with the 1994 Budapest Memorandum these security guarantees were given, it should be stressed, not in exchange for equally stirring assurances from Ukraine, but for its relinquishing a massive arsenal of nuclear weapons.  Had Ukraine not given up these weapons, Russia would not have annexed Crimea nor begun its undeclared war in eastern Ukraine.

US Vice President Joe Biden gave repeated assurances in a speech on Dec 8 while in Ukraine.  The fact that the US does not always talk about Crimea, Biden asserted, does not mean that it’s forgotten.  His words were widely reported, though variously interpreted.  The Crimean activists who held a demonstration outside the Ukrainian President’s Administration on Tuesday evening were clearly bitter about the influence exerted by western countries (which can be assumed to have included America) to pressure Ukraine’s leaders to partially lift the electricity blockade on Crimea despite Russia’s failure to release any of the Crimean political prisoners.

Gaide Rizayeva, a Crimean Tatar lawyer who was forced into exile and who spent 7 months in Kremlin-backed militant captivity in Donbas, asks why Crimea is not included in the Minsk agreement.  Its inclusion would make it possible to pursue exchanges and the release of Crimean political prisoners.

There are multiple issues with the Minsk Accords, and many feel that the West is putting too much pressure on Ukraine to make highly contentious concessions while Russia and its proxies continue to ignore their obligations.  The agreements do, nonetheless, provide some kind of leverage, and it is frustrating that Crimea is not even mentioned in either document.

It is not a question of making Item 1 a demand that Russia end its occupation, however called for that may be.  There are realistic demands that can be made and clearly articulated.

To an extremely limited extent, this has been done.  On Aug 25, the US State Department condemned the 20- and 10-year sentences passed on Ukrainian filmmaker Oleg Sentsov and civic activist Oleksandr Kolchenko, respectively.  It stressed that “both Ukrainians were taken hostage on Ukrainian territory, transported to and imprisoned in Russia, and had Russian citizenship imposed on them against their wills” and that they were targeted because of their opposition to Russia’s forced annexation.  The US again called upon “the Russian Federation to implement the commitments it made in signing the Minsk agreements by immediately releasing Oleh Sentsov, Oleksandr Kolchenko, Nadia Savchenko, and all other remaining hostages”.

The EU, Parliamentary Assembly of the Council of Europe and European Parliament have both demanded the release of Sentsov and Kolchenko, while avoiding specifying who else falls under the Minsk agreement which speaks of “all hostages and illegally held persons”.

Afanasyev found the courage to stand up in court and retract his testimony, stating clearly that he had been tortured into ‘confessing’.  That retraction was ignored in a trial condemned by Russian human rights activists as “absolutely Stalinist”.  Afanasyev has been recognized as a political prisoner by the authoritative Memorial Human Rights Centre, and there have been repeated warnings that he is in danger.

Whether under the Minsk Accord or elsewhere, it is vital that western countries demonstrate that Crimea remains ‘on the agenda’ by defending the rights of those Crimeans who are currently imprisoned or exiled as a result of Russia’s invasion and occupation of Crimea, as well as demanding a proper investigation into the abductions and disappearances of many others.

There has been a significant deterioration in observance of all rights in Crimea as detailed in numerous reports from international NGOs and western countries.  The Freedom of the Press 2015 report from Freedom House, for example, speaks openly of Russia’s invasion of Ukraine, and places Russian-occupied Crimea as one of its 10 “worst of the worst.”  The problem with human rights reports is that while they provide undoubtedly valuable information, this gets read by a very limited audience.  Lack of publicity about the many Crimean Tatars and other opponents of Russian occupation who are facing persecution helps Russia and the politicians in the West who are lobbying for an end to sanctions and business as usual with Russia and Crimea under Russian occupation.

Assurances that Crimea remains on the agenda are quite simply not enough, especially when even the European Union sanctions now in place over Russia’s aggression are being questioned.  Both Ukrainian and western leaders do have levers to defend the victims of Russia’s most flagrant lawlessness.  They should be encouraged to use them.

The following are brief summaries – please share the links, especially to politicians who lobby for the withdrawal of sanctions.