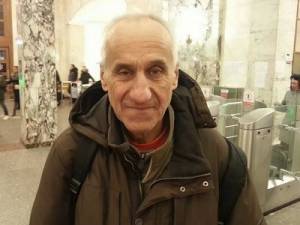 Vladimir Ionov, the 76-year-old civic activist on trial in Moscow under Russia’s new anti-protest law is in a cardiology emergency care ward after experiencing chest pains.  According to his friend Olga Brown, the doctors have diagnosed unstable angina and are keeping him in emergency care due to the high risk of a heart attack.

Brown explains that the heart irregularity began on Monday after the monstrous 3-year prison sentence passed on Ildar Dadin and scuffles in and outside the courtroom.  “That nightmare in the court and the sentence hit him [Ionov] hard. When we returned from the court, he was already in a terrible way. Because they all come to him for protection, women cry and he comforts them, yet for him it’s also tough”, she said.  On Monday evening, he had heart pain and briefly lost consciousness, but his condition improved and he stayed at home.  On Thursday morning, however, his condition worsened and an ambulance took him to hospital.

Vladimir Ionov’s final court hearing was due on Dec 8, but was first postponed until Thursday, now until Dec 16.

Dadin and Ionov are the first two civic activists on trial under a new draconian anti-protest law.  Ildar Dadin was sentenced by judge Natalya Dudar from Moscow’s notorious Basmanny Court to three years imprisonment for so-called repeated infringements of the rules on holding meetings.

On Nov 25, another prosecutor demanded ‘only’ a three-year suspended sentence in Ionov’s case.  This could be a theoretical difference, however, as the 76-year-old has already stated clearly that he would not comply with any restrictions on his freedom of speech. Further administrative arrests, and they would be inevitable under the present regime, could result in him also facing a real sentence.

A new Article 212.1 of the Russian Criminal Code was introduced in July 2014.  As well as hefty fines, and possible 30-day imprisonment on administrative charges, the new norm envisages criminal prosecution and sentences of up to 5 years imprisonment for totally peaceful protest.

The article can be applied if a court has issued three rulings on administrative offences within 180 days. It is standard in today’s Russia for police to detain people at entirely peaceful protests, with administrative protocols then drawn up and processed by the courts with no questions asked.   It is also customary – as it was in Soviet times – for the police to use provocateurs who walk up to a person holding a single-person picket and either cause trouble, or simply wait until the police react to what is no longer one solitary individuals.

Three activists were arrested in January 2015 – Ionov and Mark Galperin on Jan 16, and Dadin on Jan 30, with the latter, who was involved in Euromaidan as well as peaceful protest in Russia, being placed under house arrest.  Each was charged with having committed four ‘infringements’ of the rules on holding and organizing public events in the space of 180 days.

On Oct 24, members of two pro-Kremlin organizations [NOD and SERB] attacked Ionov while he was holding a single-person picket outside the History Museum in Moscow.  They threatened to do the same to “all those who insult Putin, insult Russia”.  They first doused him in green paint, then threw a chemical cleaning substance at his face, with this burning his eye.  The police did not react.

At an earlier hearing, Ionov was asked by the judge if he understood what he was accused of.  His answer that it was impossible to understand can only be seconded.