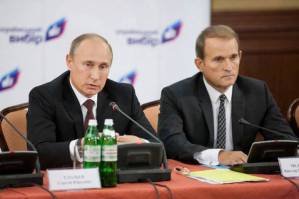 Photo: vybor.ua - Putin with Viktor Medvedchuk with the ’Ukrainian Choice’ logo in the background

Ukraine’s SBU [Security Service] has disrupted a ‘separatist congress’, reportedly planning to declare a so-called ‘Zaporizhya people’s republic’ and demand ‘special status’ for the Zaporizhya oblast.  The analogy with the Kremlin-backed ‘Donetsk and Luhansk people’s republics’ is disturbing, as is the reported link with Viktor Medvedchuk, a close associate of Russian President Vladimir Putin.

There is no information at present on the SBU site to back the initial report and video broadcast by TSN.  The reports say only that the SBU confirmed that searches had been carried out, but refused to give further information.

TSN reports that the congress was planned by ex-socialists linked with Viktor Medvedchuk.  The SB carried out searches of the homes and offices of the congress organizers on Saturday, Dec 12, and four people, including Sergiy Kuzmenko, a former MP from the Socialist Party, were taken away for questioning.  .

As with previous ‘congresses’, ‘separatist protests’, etc., it seems money was offered the participants.  Around a thousand people were invited, with each promised 200 UAH.  Whether they would have received their money is not clear, since the SBU had already intervened.  Those who arrived were told only that the congress had been called off and that they would later be told when and where the new one was to take place.  Most of those present who spoke with TSN journalists had no idea what was to be discussed at the ‘congress’, and had heard nothing of any demands for ‘special status’.

According to TSN’s sources, the congress was the work of an organization called ‘Social Zaporizhya’ which has close links with Medvedchuk.  Members have on a number of occasions travelled abroad, TSN reports, to meet with the ideologues of ‘Ukrainian Choice’, Medvedchuk’s party.

Medvedchuk has rather disappeared from the public eye since his highly controversial participation in the negotiations with Kremlin-backed Donbas militants in the summer of 2014.

Medvedchuk was one of the first people against whom the USA imposed sanctions back on March 17 “for threatening the peace, security, stability, sovereignty, or territorial integrity of Ukraine”.  He was also targeted for having “materially assisted, sponsored, or provided financial, material, or technological support to Yanukovych”. Medvedchuk’s Ukrainian Choice party was deemed by the USA to be undermining democratic processes in Ukraine.

His appearance at all, and German chancellor Angela Merkel’s apparent interest in giving him official status at peace negotiations in June 2014 raised considerable concern in Ukraine.  Medvedchuk is known to be a good friend of Putin’s, and was closely associated with the regime  of former Ukrainian President Viktor Yanukovych, now in hiding in Russia.

It was not at all clear who he and Nestor Shufrych, a person with a no better reputation in Ukraine, were representing at the meetings.

The authoritative newspaper Dzerkalo Tyzhnya reported at the time that a source close to Yanukovych had told them that Putin’s insistence on Medvedchuk’s role in the negotiations was partly aimed at getting Medvedchuk back into Ukrainian politics, by first making him governor of the Donetsk oblast, then bringing him back into parliament.  Shufrych would be given governorship of the Luhansk oblast.  These appointments, the source claimed, would be agreed at confidential discussions between Poroshenko and Putin.  It was asserted that Merkel had been brought in to clean up Medvedchuk and his party’s reputation.

Both were certainly tarnished enough.  The party’s website is notorious for anti-Semitic articles.  A particularly extreme example from 10.12.2013 was entitled “Jews, Jews, there are Jews everywhere” (A screen shot can be found here). The author, Yevgeny Barannik claimed that all power in Ukraine is held by Jews, and “the whole opposition in Ukraine is also Jewish despite some exotic surnames”.  It should be noted that pro-Russian militants repeat both the allegations, and the originally Soviet custom of writing Ukraine’s leaders’ supposedly ‘real’ surnames in brackets.  More about the anti-Semitic, homophobic and anti-EU views here Whose anti-Semitic and Homophobic Choice?

Medvedchuk disappeared from the scene after the Malaysian airliner MH17 was downed by a Russian-made Buk missile over militant-controlled territory.

His involvement and / or that of his party in a ‘separatist congress’ with paid participants would suggest that neither he, nor the Kremlin have given up their attempts to destabilize Ukraine.

There have been numerous other attempts to create ‘separatist’ movements, so-called ‘people’s republics’ or just fake ‘separatist protests’.  The following is doubtless not an exhaustive list.

Separatism’ in Lviv – For Money and Russian Propaganda