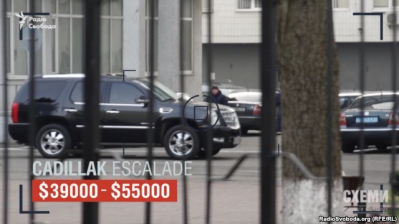 Investigative journalists have turned their eye, cameras and calculators to the cars in which Interior Ministry officials come to work and found that police top management clearly think the law is only for others to obey.

It should be said that the cars identified by Mykhailo Tkach and his Skhemy team were purchased under the regime of Viktor Yanukovych, when all those close to the leader’s trough drove only the most expensive vehicles.

Vindicating circumstances, however, end here, since Ukraine’s new leaders ordered that all ministries sell such luxury vehicles back in May 2014.  The Ministry was supposed to have retained only 3 cars.

The Interior Ministry top management clearly did not feel that the relevant Cabinet of Ministers decision applied to them.

Tkach found more than 10 of the cars driven into the Interior Ministry’s carpark have seriously large price tags, with the average value around 30 thousand US dollars.  The estimates were given by an independent expert with around 15 years’  experience in the field.  Even if the prices quoted are for the cars if new, not when sold as used, there is still a significant amount of money supposed to have been returned.

The expensive cars all drive into a side carpark with a person on duty to lift and lower the barrier when required.  One of the cars going through this was a Cadillac Escalade, which sells for 39 – 55 thousand USD.  Tkach cites sources within the Ministry who would only speak on condition of anonymity, since they feared losing their job.  They say that it is one of the Minister Arsen Avakov’s deputies, Oleksy Takhtai who comes to work in the Cadillac.

A Ministry spokesperson would not confirm who travels in the luxury cars, but did not deny that the cars are used. The Press Service clearly did not know how to answer probing questions regarding the luxury vehicles.  The person thought that “maybe” the Cabinet of Ministers instruction had been changed.  “It could also be that the Interior Ministry’s leadership in a country that is at war uses work cars, for example, for work-related trips to the zone near the front, or ATO [the military zone, officially known as ‘anti-terrorist’] and for other purposes which demand additional safety precautions”.

In a country at war it is surely the use of Cadillacs and Toyota Land Cruisers that raises eyebrows.

With respect to security measures, there are indeed occasions where the police need to use secret or fake number plates.  Such occasions are clearly spelled out in Ukraine’s Law on Investigative Operations.  Most importantly, such number plates are used for carrying out operations, not carrying high-ranking officials to work and back, as is currently the situation.

Tkach notes that there are also a number of private cars, such as a Toyota Land Cruiser Prado worth 40 thousand USD and higher, which people park near the Ministry every day.  The journalists tried to take an interview of the person arriving in the Toyota, however he began running away, then when they caught up, denied that he worked at the Ministry.

Anton Herashchenko, former adviser to Avakov and now an MP, frequently comes to the Ministry, driving a Honda Crosstour, worth about 30 thousand USD.  This bears no relation to his declaration which says he earns different level of income and drives a modest Skoda.  When challenged by the journalists, he said that he was “renting” the car from a friend who had previously used his Skoda.  He promised that this would be recorded in his next declaration.  He denied that he has a driver, saying that sometimes he is at the wheel, sometimes the same friend.

The Ministry’s Press Service said that the Ministry is willing to investigate any suspicion that the style of life of an employee does not gel with their income, and that such information should be passed to the attestation commission which is currently re-certifying employees.   Sounds good, but this is effectively what Tkach and the other journalists from the Skhemy.  Corruption in Action programme has done, and there remains uncomfortable silence.

This is not the first such report.  See also: Ukraine’s Security Service resorts to attack & threats to keep their luxury lifestyle secret