No Swift End to Russia’s ‘Trial’ of Nadiya Savchenko 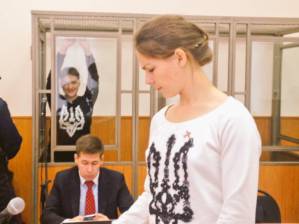 The defence’s prediction that Russia’s ‘trial’ of Ukrainian MP and former military pilot Nadiya Savchenko would end before the end of December appears to have been premature.  The court has scheduled hearings until the end of January.  This may be because of the heavy weight of evidence which the defence has forced the court to acknowledge receiving, or because the Kremlin is playing for time.  The scheduling could, however be another ploy to deflect public attention from the case.  The authorities did this last year with the politically motivated sentences passed on opposition leader Alexei Navalny and his brother Oleg.  They were suddenly brought forward to the day before New Year to reduce public attention and make any protests under Russia’s draconian anti-protest laws ‘illegal’.

The prosecution has presented all its material and witnesses, and it is now the defence’s turn.  The court (under presiding judge Leonid Stepanenko & judges Ali Khaibulaev and Yevgeny Chernysh) has consistently rejected applications for material critical to the defence’s case to be added and allowed numerous other irregularities, such as total secrecy around the testimony of a key witness, Igor Plotnytsky.

The list of rejected applications is long, but one of the latest is indicative.  The defence has long demanded a repeat experiment with a person standing at the top of a television tower and viewing people at a distance of 2.5 kilometres.  The prosecution’s two experiments, according to the defence, cannot be considered acceptable.  The lawyers point out, for example, that the two people in the distance were wearing dark clothing whereas the two journalists were in light-coloured clothes.  There is in general a question mark over how much anybody could see from such a distance.  This is not to mention the fact that neither the binoculars nor the sophisticated radio equipment that Savchenko is alleged to have used has been produced.  This application was simply rejected.

The defence also asked for the relevant expert examination to be carried out of a video made by a militant  Yegor Russky.  Since the video shows Nadiya Savchenko already in captivity, it is of critical importance when the shot was taken.  Ilya Novikov, one of the lawyers, also asked to question a Moscow-based radio-electronic engineer with 34 years’ experience regarding this same question.

Here the court deferred a decision, giving the prosecutor time to read through the material before the next hearing on Dec 16.

Novikov also reported that a large amount of material sent in response to a Prosecutor General’s request has still not been delivered to the court, although it is known to have arrived on Nov 30.

The delay tactic could not work. There are three copies of the material, and one lot Novikov has passed to the court.  The four volumes of vital protocols of interrogations, documents from the company owning the tower that Savchenko is supposed to have climbed etc. have now been handed to the prosecutor to read through, also before the next hearing.

Moscow’s insistence on holding the trial in the obscure town of Russian Donetsk in the Rostov oblast was understood from the outset as aimed at minimizing publicity and foreign media and diplomat presence.  Totally irrelevant ‘witness’ testimony and material have also served to drag the trial out with this meaning, as freelance journalist Anton Naumlyuk reports, that very few media are regularly reporting on the trial. 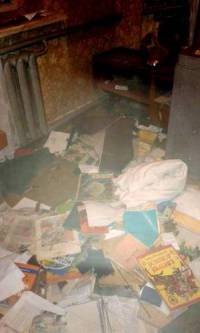 Naumlyuk writes that only one civic activist – Natalya Kisel, a former university lecturer, has regularly attended the court hearings.  Her family home has just been ransacked and, although there is no proof that this is linked with her active position, the criminals did leave a message daubed with lipstick calling her a fool.

The defence clearly considers that it has a serious arsenal of hard evidence proving Savchenko’s innocence.  There may be little chance that this will be heeded by the court, but it is vital that it gets heard and reported by journalists and, hopefully, diplomats.