What ‘Dialogue’ with Russia as Putin reserves the right to flout international law? 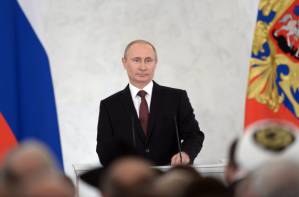 Russia’s President Vladimir Putin has signed into force a law allowing Russia to flout the European Court of Human Rights by claiming that it’s judgements are in violation of Russia’s Constitution.  This final assertion of impunity from international law comes less than three days after Russian OMON riot police used violence against Russian citizens defending the Russian Constitution.  Some of those detained could face 15 day terms of imprisonment.  Under new anti-protest legislation, if they have already been detained three times in the last six months, they could face up to 5 years imprisonment – for defending that same Constitution.

Article 31 of Russia’s Constitution is quite unequivocal:  “Citizens of the Russian Federation shall have the right to assemble peacefully, without weapons, hold rallies, meetings and demonstrations, marches and pickets”. 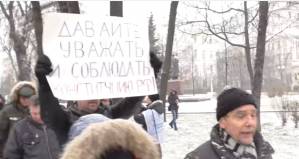 On Russia’s Constitution Day, Dec 12, a very small group of Russians tried to assert their constitutionally enshrined right to assemble and march peacefully, or by holding single-person pickets on Pushkin Square.  The authorities had refused to ‘allow’ the planned March for Change, claiming that Moscow needed to actively prepare for the New Year festivities.

Around 33 people were detained during the attempted march and held in various police stations.  Most were released after protocols were drawn up alleging infringements of the rules for holding public events, however Sergei Mitrokhin, leader of the Yabloko Party and five other participants were held in custody until the court hearing.

A high-ranking police official later reprimanded the police for having later released the organizer Alexandr Ryklin, Chief Editor of the independent Internet publication Yezhednyevny Zhurnal.  Officials from the so-called Centre for Countering Extremism spent all of Sunday, Dec 13 looking for him.  He was detained on Monday and held in custody overnight.  He could have been jailed for 15 days, so the thousand rouble fine was relatively mild if you ignore the fact that he was simply exercising his constitutional rights.

As in later Soviet times, the authorities claim that the person showed resistance to the police, etc.  It is worth watching a video recording of the attempted march, during which the participants chanted nothing more ‘extremist’ than “Constitution!” and held banners reading, for example, “Let us respect and observe Russia’s Constitution. » 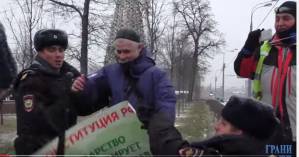 At the beginning, a man is standing peaceably with a banner reading: “The Constitution [does not] guarantee equality of rights and freedoms”.  Even under new repressive legislation, he was not doing anything wrong, yet was manhandled by OMON officers and taken away.

At around 0.58 on the tape, a women tries to hold up a placard reading: “Hands off Vladimir Ionov. He’s 76 years old!”  One of the officers uses cardboard to obscure the placard, while the woman is also physically dragged away.

Vladimir Ionov is due in court on Dec 16 to face identical charges to those against Ildar Dadin – of repeated ‘administrative offences’ after police detained him for holding (legal) single-person pickets.  Dadin was sentenced to 3 years imprisonment, the first victim of a totally repressive law and already recognized as a political prisoner by the Memorial Human Rights Centre.  Ionov is indeed 76 years old, and was taken by ambulance to emergency care, due to serious risk of a heart attack.   The new article of the Criminal Code (212.1) under which both have been charged allows for a sentence of up to 5 years imprisonment for four administrative ’offences’.  Judging by the events on Dec 12, a person could be detained and receive an administrative penalty four time for no more than trying to stand with a banner in defence of Russia’s Constitution. 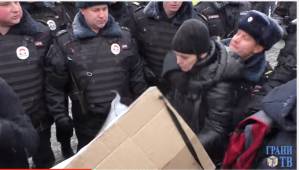 The banner the police even concealed was only in defence of Vladimir Ionov, a 76-year-old pensioner

The video is worth watching to the end, especially since many of the people defending their Constitution could soon be facing criminal charges for such repeat ‘offences’.

So what is ‘unconstitutional’?

The new law sped through Russia’s State Duma, and adopted in full on Dec 4, allows for judgements from the European Court of Human Rights and other international courts to be flouted if Russia’s Constitutional Court asserts that they are unconstitutional and therefore “unable to be implemented”.

It is the nearly 2 billion Euros in compensation to Yukos shareholders awarded in an ECHR judgement that has had the most publicity, but there are many other judgements from the Court in Strasbourg that Russia’s leaders do not wish to comply with.  There will certainly be many more, since it is inconceivable that Russia will not be found in breach of the European Convention over its annexation of Crimea, and the ensuing huge number of flagrant rights violations, not to mention the awaited judgements over the Beslan attack.  Since Russia claims that Crimea is part of the Russian Federation, and, against all evidence, denies its involvement in the military conflict in Donbas, it seems likely that all such judgements could be found to be ‘unconstitutional’.

Bill Bowring, Professor of Law at Birkbeck College, University of London, points out that the law does not define how the ‘possibility’ of non-implementation is to be interpreted.  He notes that the State Duma’s own lawyers indicated that the draft amendments were in breach of the Constitution (see above), the Law on Ratification of the European Convention on Human Rights, and a Supreme Court ruling from June 27, 2013 on the application of this Convention (available here in English.

Nothing will happen, he says, until either the President or the Government applies to the Constitutional Court for a decision as to the "possibility" of implementing a judgment. "If the Court declares that it is "impossible" to implement the judgment, this will be a matter for the Council of Europe, almost certainly the ECtHR itself".

There is no carte blanche as such for blanket non-implementation of international court rulings.  Russia is also a member of the Council of Europe and part of the Vienna Convention on the Law of Treaties.  No bill can waive the country’s legal obligations to implement rulings of international human rights bodies established by international treaties.

On the other hand, the bill originates from a judgement passed by the Constitutional Court on July 14 which stated that “Russia, as an exception, may derogate from execution of its obligations if such a derogation is the only possible means of avoiding infringement of fundamental constitutional principles”.

The Court ruled that the European Convention and the European Court of Human Rights judgements based on it are subject to implementation only on condition that they comply with the higher legal force, namely the Constitution of the Russian Federation.  That judgement triggered concern, with  Anne Brasseur, President of the Parliamentary Assembly of the Council of Europe pointing out back in July that implementation of ECHR judgements is a legal obligation binding on all parties to the Convention and that there cannot be any “selective implementation”.

A bill which openly contradicts Russia’s Constitution has been signed by the President into law.  What the consequences may be remains unclear, but the move is highly disturbing.  While Western leaders continue to talk of ‘dialogue’ and ‘cooperation’ with Russia, and some even call for an end to the sanctions, Moscow has just demonstrated that it reserves the option to not play by international rules.

The screenshots are from the Grani.ru video; the photo of Putin from RIA Novosti