Sentsov & Kolchenko are being moved to Russian prisons. Write to them! 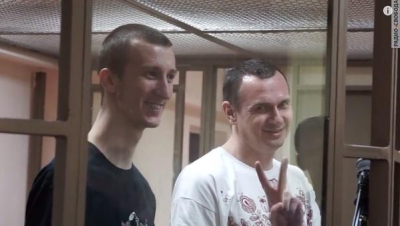 Ukrainian filmmaker Oleg Sentsov and civic activist Oleksandr Kolchenko have been moved to another remand prison in Rostov [Russia] and are likely to be sent to Russian maximum security prisons any day now. The two men are recognized by Memorial as political prisoners and their release, as required under the Minsk Agreement, has been repeatedly demanded by European structures and all democratic countries. Moscow has ignored all of this, as well as the protest over its claim that the two Crimeans ‘automatically’ became Russian nationals.

Both men have remained steadfast in their courage and refusal to be broken, but the sentences (20 and 10 years) are monstrously long, and it is vital to show them that they are not forgotten.

Please write to them!

Since we don’t have addresses as yet, you can write very easily, without even having to go to the post office, via the Russian civic initiative ‘RosUznik’  [“РосУзник”].

The initiative arose after so many Russians were imprisoned over the anti-Putin protests on Bolotnaya Square in 2012.  There are many other political prisoners as well, including now a number of Ukrainians illegally held in Russia.

It is extremely easy and your letters will mean a lot to Oleg and Oleksandr!

The RosUznik activists have gone all out to make letter-writing very easy.

For Oleg Sentsov you’ll see three lines.  The first has Олег Сенцов [Oleg Sentsov], in the second, type in your name, the third your email (RosUznik will notify you if Oleg answers).  In the box in the middle, type in your message, then press the box at the bottom saying ОТПРАВИТЬ [SEND]

RosUznik will print out your letter and post it, meaning that it should arrive within two or three days.

If you can, please write in Russian (mistakes don’t matter!).

If that’s a problem, then do please write in English, but try to avoid complicated or colloquial structures, since the RosUznik people will be translating the letter for you.

If absolutely nothing comes to mind, then send them the following simple message. !

Ukrainian political prisoners during Soviet times all stressed how important it had been to receive letters and know that they had not been abandoned.

It is also important to show Russia that nobody believes in its parody of a trial and that they are under scrutiny.

Please also bring the details below of this case to the attention of journalists and politicians in your country.  Pressure is vital to ensure the men’s release.

Four opponents of Russia’s annexation of Crimea were arrested in May 2014, and held incommunicado for weeks before being taken to Russia, when on May 30 the FSB or Russian Security Service claimed that they had been involved in a ‘Right Sector terrorist plot’.  There was nothing to indicate any presence of the ultra-nationalist Right Sector in Crimea, and the idea that Kolchenko, who is a committed left-wing anarchist would have taken part in a far-right movement’s ‘plot’ was absurd.

All international bodies and democratic countries have publicly demanded the release of two men – Oleg Sentsov and Oleksandr Kolchenko as required by the Minsk Accords (and implicitly the other two when they speak of ‘all others illegally held”;

There was no evidence of any such plot, nor, as mentioned, any likelihood, given how far Kolchenko’s views are from those of the right-wing and ultra-nationalist Right Sector.

Russian human rights defenders condemned the trial of Sentsov and Kolchenko, calling it “ideologically-motivated state terror” against opponents of Russian occupation of Crimea.

All four men are clearly victims of repression and as illegally held by Russia, a party to the Minsk Accords, must be released and returned to Ukraine.