Russia’s crimes in Crimea, not ending sanctions, should be on the West’s agenda,Repressive measures intensify as Crimean blackout bitesDzhemilev: Free Political Prisoners & Restore Rights if You Want Power BackCrimea without Power: Where Now?Armed Right Sector & Azov fighters are discrediting Crimea BlockadeCrimean Blockade: No More ‘Mutually Advantageous Collaboration’Stop Feeding Bandits! Crimean Tatars call for a Civil Blockade of Occupied CrimeaLegislative Stab in the Back for CrimeansGermans ignore international embargo against Russian-occupied CrimeaUkraine can demand the arrest of ships which enter Crimean portsTransport blockade can help return Crimea to UkraineECHR could take years to reach judgement on annexation of the CrimeaSilence over Repression of Crimean Tatar LeaderRussia resurrects Soviet ways in treatment of the Crimean TatarsRefat Chubarov also banned from CrimeaCrimean Tatar Mejlis newspaper accused of ‘extremism’Statement of Concerned Scholars Regarding the Current Predicament of the Crimean TatarsCrimean Tatars demand end to repression, call for international supportCrimean Tatars defy ban on remembranceRussian Clamp on Crimean Tatar Remembrance
• Topics / News from the CIS countries 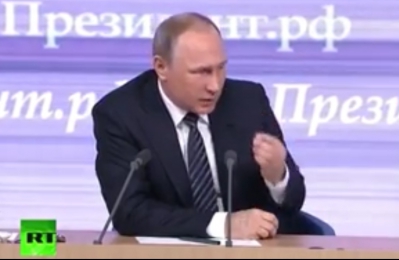 During the Dec 17 press conference where Russian President Vladimir Putin admitted for the first time that Russian military personnel are ‘resolving various issues" in Donbas, he also spoke on the subject of an exchange of Savchenko, Sentsov and others in language more befitting a kidnapper than a President

Putin claimed that any exchange involving the Ukrainians whom Russia is holding captive must be “of equal value”.  The Minsk Agreement to which Russia is a signatory agrees the release of all “hostages and illegally held persons”.  It has been repeatedly stated by, among others, EU, Parliamentary Assembly of the Council of Europe [PACE] and US representatives that Nadiya Savchenko, Oleg Sentsov and others held in Russia fall under the agreement and must be released.

Putin was replying to questions from UNIAN correspondent Roman Tsymbalyuk.  These are worth quoting in full:

“In the context of your repeated assertions that there are no Russian military personnel in Donbas, I’d like to pass on greetings from Captain Yerofeyev and Sergeant Aleksandrov, from the Third Brigade in Tolyatti (Russia).  Will you be exchanging them for Savchenko, Oleg Sentsov, Gennady Afanasyev, Oleksandr Kolchenko, Stanislav Klykh… (and that is anything but a full list)?

And if possible, another question …  a continuation of the first.  The Minsk Agreement is ending, not one of the parties is implementing it.  So what should we expect from you from Jan ?  Will you again go on the offensive, or offer some kind of negotiations, or maybe you can forget about Ukraine for a while?”

Putin began his response, “on the subject of exchanges”, by claiming that Russia had never said that they did not have people in Donbas engaged in various activities, including in the military sphere. But there are no regular forces, he asserted, and asked the audience to “feel the difference”.

In fact, Putin was, as with Crimea, lying.  Russia has persistently denied the presence of any military personnel in Donbas.  The Russian Defence Ministry has claimed that the two military intelligence [GRU] officers Yerofeyev and Aleksandrov, captured in Donbas had left military service last year.  The two men were placed under enormous pressure and have both now changed their story to that given by the Defence Ministry, admittedly without any credibility given the number of times they freely admitted to being from GRU  (see: More evidence that captured Russians were military intelligence officers

There is also considerable evidence that regular forces have been and probably are being deployed in Ukraine  (e.g. Russia challenged over major increase in ‘unexplained’ soldiers’ deaths).

Putin’s acknowledgement that military forces are involved in Donbas was a first, and therefore widely reported.  The rest of his answer was also important and just as telling.  He pointed out that Tsymbalyuk had mentioned ‘only’ two men “whom you offer me, and then a long list of people whom you want to exchange them for.  Firstly, an exchange must be equal”.  After that beginning, more appropriate for an abducting negotiating a ransom, than a President, he suggested that they would need to “sit down quietly and discuss this”, and even choked out the words “with the President of Ukraine”.  He then recalled the Minsk Agreement, pointing out quite correctly that it entails an all for all exchange.  He claimed that it was the Ukrainian side that was violating this by bringing criminal charges against Yerofeyev and Aleksandrov.  He ducked the rest of the question, and the subject of Ukrainian prisoners held in Russia altogether.

He thus ignored the following not unimportant details.

Two Russian military intelligence officers were caught during a military operation provoked by the Russian / Kremlin-backed militant side in which one Ukrainian soldier was killed and others injured.  Russia has not declared war on Ukraine and has up till now denied any military involvement.  It is hardly surprising that Ukraine would initiate criminal proceedings.

All the Ukrainians whom Tsymbalyuk mentioned and many others are civilians held illegally and tried on trumped up charges in Russia.

The only person even remotely similar to the two Russian GRU officers would be Nadiya Savchenko, a former Ukrainian military pilot.  She was, however, captured by militants in Ukraine and taken by force to Russia, where a shocking travesty of a court trial is currently underway.  Savchenko has been declared a political prisoner by the Memorial Human Rights Centre, and her release has been repeatedly demanded as falling under the Minsk Agreement.

Savchenko is reported by her lawyers to have declared hunger strike again, until the end of the trial.  This news came after a Russian court extended her detention again, until April 16, 2016 – 22 months after she was illegally abducted to Russia.

It also followed the latest court hearing on Dec 16 where the ‘judges’ refused to add material provided by Ukraine to the case.  The material in question proves Savchenko’s innocence of the preposterous charges laid, and the judges’ rejection of it was not the first demonstration of close cooperation between the prosecution and the court and of serious irregularities in the ‘trial’ (see: No Swift End to Russia’s ‘Trial’ of Nadiya Savchenko).

The other Ukrainians held prisoner in Russia are all civilians, and there are very serious concerns over how they came to be in Russian detention or prisons, the methods (torture or unlawful pressure) used in some cases to extract ‘confessions’ and their trials.

Memorial has declared Ukrainian filmmaker Oleg Sentsov, Oleksandr Kolchenko and Gennady Afanasyev political prisoners.  Sentsov and Kolchenko have already been moved to a transfer remand prison in Rostov and are likely to be sent to serve politically motivated 20- and 10-year sentences in Russian prisons (more details of this internationally condemned case here).

Memorial has also highlighted grave violations and total lack of credibility in the ongoing trial of two Ukrainians Mykola Karpyuk and Stanislav Klykh in Grozny.  Both men were effectively abducted and held incommunicado for well over a year.  Both retain the scars from torture and have retracted the grotesque ‘confessions’ tortured out of them (see: Memorial exposes Russia’s cynical con in trial of ‘Ukrainian nationalists’),

The above is also not a full list, but it is quite sufficient to understand that Putin was right about one thing.  This is no equal exchange.  Ukraine is not holding innocent civilians hostage nor subjecting them to grotesque ‘trials’ on trumped up charges.

All are illegally held and all must be released.  Failure to do so is surely cause for the West to extend sanctions, rather than suggesting that they could be removed.