Odesa 2 May Suspect: We were financed by MoscowVital Probe of Odesa May 2 Tragedy stymied because of questions answered?Movement at last on Odesa 2 May investigationRussia Today, or why Odesa May 2 is different from BaltimoreOdesa May 2 Investigation: A Failed Test for Ukrainian JusticeMore Evidence against Incendiary Lies about Odesa 2 MayContinuing Obstruction of Odessa May 2 InvestigationPropaganda that KillsOdessa May 2 trial turns into farce as Russia continues ‘massacre’ propagandaBad Start to Crucial Odessa May 2 TrialsRussia’s New Odessa FileOdesa "Massacre" Propaganda vs. the FactsDangerous silence over police role in Odessa May 2 eventsWithout Double StandardsWhat Russian TV won’t show about the events in OdessaCVU: Pro-Russian activists sold information about pro-Ukrainian activists in OdessaUHHRU condemns police role in Odessa tragedyOdesa Smoking Gun Leads Directly to MoscowFrench filmmaker adopts Putin’s ’Ukrainian fascist hordes’ line for Canal Plus‘Clear Signs of Sabotage’ in Odesa 2 May Investigation
• Topics / The right to life

"US guilty of genocide": Kremlin supports anti-Maidan festival with links to the German far right 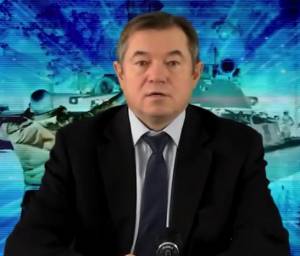 There is only one truth, according to Russian President Vladimir Putin’s Adviser Sergei Glazyev, and it’s a blockbuster.  The claims about an ‘Odesa massacre’ on May 2, 2014 by neo-Nazis with US support are being touted around Europe by an Odesa anti-Maidan activist with close links to the German far-right.  In an address to a highly specific film festival in Berlin, Glazyev asserts that mass murder was committed in Odesa by a neo-Nazi gang, abetted by the local authorities.  This, he goes on to call, “a monstrous act of genocide that took place in the eyes of the entire world”, with the complicity of the Ukrainian government, behind whom can be found the US secret service.

It was the USA who installed “a Nazi junta” in Kyiv and they who were worried that during the May festivities in Odesa “the anti-fascist freedom movement in Ukraine, the supposedly “patriotic forces” would overthrow the neo-Nazi regime”, hold a referendum and give a vote of no-confidence in the “Nazi junta”.

The crimes thus described were, according to Glazyev, all planned in advance.  He claims that not only has there been no objective investigation, but the ‘junta’ has jailed – and “further tortured” – the victims, not the perpetrators.

Should anybody consider there to be grounds for trying the US Ambassador for genocide, the rest of Glazyev’s address can be found here.

Even the Russian population has become more immune to warmongering lies on their television screens, and Glazyev’s pronouncements have long aroused incredulous disbelief.

The man is an adviser to the Russian President which in itself must arouse concern.  More worrying, however, is Russia’s continuing engagement in perpetuating lies about the tragic events in Odesa on May 2, 2014.  Glazyev’s appearance at a questionable event linked with Oleg Muzyka, one of the most vocal propagandists of an ‘Odesa massacre’ narrative, only confirms suspicions regarding Russia’s active role in the toxic lies which are known to have prompted many young men to go to fight in Donbas.

While it is true that the Ukrainian authorities have failed badly to carry out a proper investigation into the events on May 2, 2014, Glazyev is brazenly lying about the lack of an objective investigation.  This is hardly surprising when both the thorough work carried out by the 2 May Group, a civic initiative representing all parties to the conflict, and the assessment made by an International Advisory Panel [IAP] made it quite clear that there had been no ‘massacre’.  The IAP’s Nov 4 report also demolished any attempts to treat  the anti-Maidan (or pro-federalism) activists as victims of ‘Ukrainian radicals’.

The Nov 4 report noted that the disturbances in the centre had been caused by a group of pro-Russian anti-Maidan activists who attacked a pro-unity (pro-Ukrainian) march in the centre of the city.  It found that the fire which caused the death of 42 of the victims had started in 5 places, with 4 of these directly due to the actions of people within the Trade Union Building.  It stated that there is no evidence that the fire was pre-planned, and in no way questioned the earlier findings presented by the 2 May Group.  Both the Group and the international experts pointed out that the anti-Maidan activists had brought large amounts of Molotov cocktails and the products needed to make them into the Trade Union building. Molotov cocktails were being hurled by both sides, and which caused the fire is quite simply impossible to determine.

Glazyev’s allegations about collaboration by the local authorities also do not bear scrutiny.  During the earlier disturbances, there is clear evidence, documented by both the 2 May Group and the International Advisory Panel, that certain police officers, including Dmytro Fuchedzhy, the deputy head of police now in hiding, abetted anti-Maidan activists.  Fuchedzhy, for example, is suspected of helping Vitaly Budko (‘Botsman’) to escape after the latter almost certainly shot dead the first pro-Ukrainian activist, Ihor Ivanov.  The 2 May Group has recently also challenged the Regional Prosecutor to investigate possible links between an employee of the prosecutor’s office and the anti-Maidan activists who provoked the disturbances on May 2.

While officials should certainly answer for the 40 minute delay before the emergency services arrived at the scene of the fire, there is no evidence to suggest that they understood how many people were trapped in the building.  Glazyev and Russian propaganda also stubbornly ignore the mountains of video footage showing how pro-Ukrainian activists tried to save the people in the building. 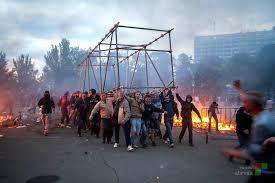 The 2 May Group has also examined how the claims of a ‘massacre’ first appeared and how they have been perpetuated, with the propaganda efforts reaching far beyond Ukraine and clearly costing a considerable amount of money.

The analysis just published was doubtless prompted by events linked with the so-called film festival in Berlin which Glazyev addressed.  In the middle of November, the Group learned by chance that the German translation of their film ‘Odesa 2 May: Without Myths’ was listed as one of several films to be shown at the film festival entitled ‘Democracy in Flames’,   This was due to take place in the Berlin Haus der Demokratie und Menschenrechte (The House of Democracy and Human Rights) from 17-19 December.  The organizer was named as Oleg Muzyka from an organization calling itself ‘Global Rights of Peaceful People’. 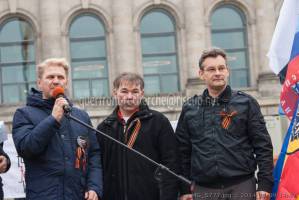 from left: Oleg Muzyka, an activist from NOD Germany and Rüdiger Klasen who served a prison sentence for setting fire to a hostel for asylum seekers.

Muzyka is well-known to the Group members both as one of the active anti-Maidan participants in the disturbances on May 2, 2014 and as one of the chief propagandists of the ‘Odesa massacre’ lies.  He was taken from the roof of the Trade Union building after the fire and arrested.  While clearly any charges against him would need to be proven, it is worth noting that anti-Maidan activists positioned on the roof were shooting and hurling Molotov cocktails at pro-Ukrainian activists, including those who were desperately trying to rescue people caught by the fire.  He was released after anti-Maidan activists stormed the police station where he was held on May 4.  He fled to Germany and has been there since, except when he goes travelling around Europe with an extremely well-funded ‘exhibition’ pushing the ‘massacre’ lies.

The 2 May Group members were understandably outraged that their film was being used to give credibility to a dodgy ‘film festival’, and sent a letter in Russian and German to the Director of the Berlin venue , indicating that the use of the film without their permission was a flagrant violation of their authors’ rights.

Haus der Demokratie und Menschenrechte took the objections seriously and told Muzyka to find another venue for his festival.  It is likely their decision was influenced by considerable evidence of Muzyka’s links with far-right, neo-Nazi and homophobic groups.  Muzyka is also known to have close contacts to the Reichsbürger movement, which as well as believing that Germany is occupied and controlled by the USA, is also notoriously xenophobic and anti-Muslim.  Muzyka is believed to have particularly close ties with Rüdiger Klasen, a former member of the far-right NPD party who served several years in prison for setting fire to a hostel for asylum-seekers. 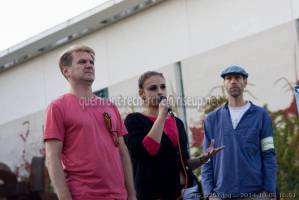 Muzyka is the man on the left, on the far right is Carsten Halffter, who is involved in the Reichsbürger movement, and known for organizing anti-Semitic demonstrations

Muzyka and his cronies were sufficiently in with Putin’s adviser to get Glazyev’s very own address videoed to the festival, moved to a building owned by Nicholas Werner, a businessman known for supporting anti-Maidan activities in Germany.

The event, moved from a reputable venue, and without the reputable 2 May Group’s film attracted less attention than was probably hoped for.

Other events have, however, received wide coverage, including the exhibition shown in many countries.

Somebody is funding all these activities.  It is perhaps of relevance here that Serhiy Rudyk, one of the men facing charges over the disturbances on May 2 is in no doubt that the anti-Maidan protests on Kulikovo Pole in the Spring of 2014 were paid for “by Moscow”*.  In a lengthy interview given to a member of the 2 May Group, Rudyk, named the specific amounts paid for living at the anti-Maidan camp, and mentioned rumours that Moscow paid 2 million dollars for the entire ‘Kulikovo Pole project’.

Who is enabling Muzyka to enjoy travelling around Europe and invite other ‘witnesses’ to join him cannot be proven.  It is, however, logical to ask why Putin’s adviser and the pro-Kremlin media have been united in concealing the facts about the events in Odesa and the findings of the International Advisory Panel and instead continuing to spread lies about a massacre that never was.