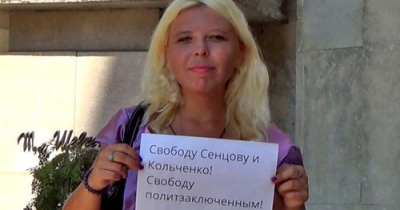 The placard is calling for the release of Crimean political prisoners Oleg Sentsov, Oleksandr Kolchenko and others

A Krasnodar court has sentenced 26-year-old Darya Polyudova to 2 years minimum security imprisonment for supposed ‘public calls to extremism and separatism, including via the Internet’.  Unless a miracle happens, and Polyudova’s appeal is upheld, she will also be banned from teaching or working in the media.  The prosecution came up with two texts on the social network VKontakte and a single-person picket, however the persecution of the young Kuban activist dates back to August 2014, when she and a few other friends tried to hold a march in favour of greater, although still limited, federalization for Kuban.  The repressive measures, both against Polyudova and some activists in Siberia who were only asking for a greater say at local level, was in telling contrast to Russia’s arming of pro-Russian militants in Donbas and demands that their so-called ‘republics’ be given ‘republic’ status.

Polyudova was arrested on Aug 15, 2014, two days before the banned march was supposed to have taken place.  She had been approached by an obvious provocateur, then jailed for 14 days for what the court decided to consider ‘petty hooliganism’.  She was never released even though criminal proceedings were only initiated on Sept 15.  These, it transpired, were for no less than alleged public calls to actions aimed at violating Russia’s territorial integrity (Article 280.1 of the Criminal Code).  She was released from custody after 6 months, purely because of a legal requirement in the Criminal Procedure Code.

After her release, she told Radio Svoboda that the investigators had not been able to find anything to lay on her in the material prepared about the march, so they came up with three ‘episodes’ (or possibly more, since reports vary as to the charges).

Polyudova was deemed to have made ‘public calls to separatism or extremism’ [Article 280 § 1 of the Criminal Code] in connection with the banner she held up during a single-person picket on April 4, 2014.  This read “No war against Ukraine, but revolution in Russia! No war, but revolution”!  She then circulated a picture of herself with the banner on VKontakte.  . 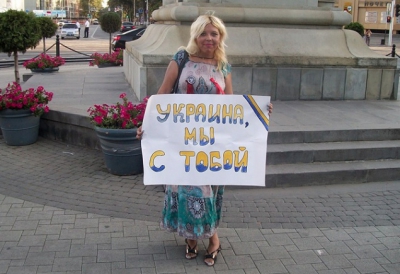 Darya holding a sign reading: Ukraine, we’re with you

The investigators decided that comments in which Polyudova laid responsibility for all terrorist acts and misfortunes and asked why if Maidan could get rid of Yanukovych, they couldn’t come out onto the streets and overthrow the regime were ‘extremist’.

She points out that there was never any suggestion of violent overthrowing of the regime, etc.

On the subject of terrorist acts, it is worth noting that Alexander Litvinenko, the former FSB officer murdered in London with radioactive polonium, also believed that the FSB was behind the apartment bombings in 1999 which helped Putin come to power, and wrote a damning book presenting his evidence.  In May Russia placed this book on its list of extremist materials and forced an Internet library to remove it.  That move came 3 months after Putin awarded a state honour to Andrei Lugovoi, the man suspected of killing Litvinenko in 2006.  An official enquiry in the UK is due to present its findings in January with this likely to incriminate Russia, as well as Lugovoi (see: Slain Kremlin whistle-blower’s book banned in Russia as ‘extremist’).

The specific posts were clearly a pretext, which is demonstrated in the fact that back in September last year Polyudova and two other Krasnodar residents who tried to hold the ‘federalization for Kuban’ march in August last year were also placed on Russia’s Federal List of Terrorists and Extremists.  The other two fled to Ukraine to escape persecution (see: Federalization as a Terrorist Act) .

That they were wise to do so was demonstrated by a Krasnodar court on Monday.  Moscow which has generously funded and armed ‘separatist’ movements in Donbas, Transnistria, and in fact throughout the world, comes down with all the weight of its repressive regime on those who dare express criticism of the President and his policies.