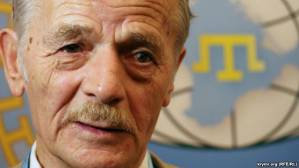 The FSB, or Russian Security Service, in Russian-occupied Crimea have tried to force a Crimean Tatar to collaborate with them using not only threats against the man’s wife and children, but also physical torture.

Mustafa Dzhemiliev, veteran Crimean Tatar leader, Ukrainian MP and President’s Representative on Crimean Tatar Affairs, reports that on Dec 16, 24-year-old Enver Krosh from Dzhankoy in Crimea was taken by force to the district police station where he was handed over to FSB officers.  The latter tried to get him to give a written undertaking to collaborate with the FSB.

Having failed to obtain Krosh’s agreement, the FSB used electric shocks as a form of torture.  He was held in the police station from 16.30 on Dec 16, to the following morning.  They released him but told him to “think about his wife, children, family …. and to consider our proposal”.

This, Mustafa Dzhemiliev writes, is not the first time that methods of intimidation and blackmail have been used to try to ‘recruit’ FSB informers, but it is the first reported case where the FSB used torture.

Dzhemiliev was blunt about the methods.  He explained to QHA that the FSB are “looking for those who’ll report on their friends, family, acquaintances.  And they [the FSB] have no qualms about threatening a person’s family and loved ones.  Even the most courageous man fears for his family”.

Abdureshit Dzhepparov from the Contact Group on Human Rights spoke with TV 112 Ukraina about the treatment Krosh received and about other worrying developments.  Since Nov 30 there have been seven searches carried out of Crimean Tatar homes.  There have also been two (fortunately, suspended) sentences over the notorious ‘3 May’ case.  As reported, many months after a peaceful protest on May 3, 2014, over the ban imposed on Mustafa Dzhemiliev from entering his homeland, the occupation regime began carrying out armed searches, interrogations and arrested a number of Crimean Tatars on dubious charges linked to the protests.

Dzhepparov also mentioned the four Crimean Tatars who are facing charges of ‘terrorism’ over alleged involvement in the Hizb ut-Takhrir organization, which is legal in Ukraine and all other countries, but which Russia has decided is ‘terrorist’.  They are likely to soon be moved to Rostov in Russia, presumably to the same military court which sentenced Crimeans Oleg Sentsov and Oleksandr Kolchenko to long sentences for non-existent terrorism.

There is increasing concern over the disappearance of two Crimean Tatars Ruslan Ganiev and Arlen Terekhov from Kerch who have not been seen since Dec 15.  Dzhepparov believes that they may have been abducted.

Dzhepparov’s own 19-year-old son Islam was abducted in September 2014, together with his cousin, Dzhevdet Islamov.  Although the van they were forced into was seen, and the registration number recorded, the occupation authorities were supposedly unable to find the vehicle.  Neither young man has been seen since.  (see: Disappearances and Groups at Risk in Russian-Occupied Crimea).

With respect to FSB attempts to ‘recruit’ informers, their methods of surveillance were seen from the beginning of Russian occupation.  Mustafa Dzhemiliev reported even before Russian banned him from his homeland (on April 22, 2014) that FSB officers were carrying out surveillance of worshippers in mosques.  He said that they were not even trying to conceal the fact, so presumably the aim was chiefly intimidation.

Nor are only Crimean Tatars targeted.  Archbishop Clement of Simferopol and Crimea from the beleaguered Ukrainian Orthodox Church under the Kyiv Patriarchate recently spoke of men in plain clothes who sat at the back of services and then told the priest what should be removed.  You could not say that the good times would return, for example.  The Archbishop does not spell out that these are FSB officers, but it was almost certain them, or officers from Russia’s so-called ‘Centre for Countering Extremism’.

Both the FSB and these ‘counter-extremism’ officers also actively follow and frequently harass Ukrainian activists.  Iryna Kopylova and Veldar Shukurdzhiyev, for example, have recently faced administrative proceedings after being detained while trying to photograph themselves with a Ukrainian flag near the monument to Vladimir Lenin on Simferopol’s central square.  Shukurdzhiyev is constantly harassed, with the FSB threatening that he would be banned from Crimea after he was stopped after returning from mainland Ukraine and held for many hours.