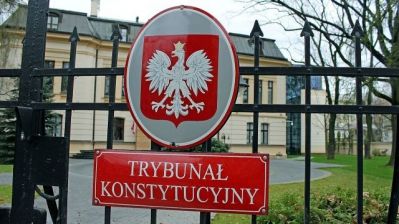 It is hopefully not possible to destroy democracy and rule of law in Poland overnight, but the country’s new President and ruling party certainly seem to be trying very hard.  On Tuesday evening the ruling Prawo i Sprawiedliwość party [PiS, ‘Law & Justice’] pushed through a law which effectively paralyzes the Constitutional Tribunal.  In so doing, it ignored calls to hold public discussion and seek expert assessments from the President of the Parliamentary Assembly of the Council of Europe [PACE], the most prominent human rights organizations in Poland, numerous former heads of the Constitutional Tribunal, professors and entire departments of law.  It also demonstrated contempt for the views of a huge number of Poles who came out twice on demonstrations in support of democracy and the Constitution.

The new law will come into force when published.  This time PiS, which holds the majority in the Sejm, is unlikely to delay, unlike the procrastination it demonstrated over publishing the Constitutional Tribunal’s judgement from Dec 3.  The latter was over the previous government’s election of five Tribunal judges back in June this year, and the actions of both the new PiS government, elected in October this year, and President Andrzej Duda who is from the same party.  These resulted in the five June appointments being ‘revoked’, and five new judges elected.  Duda had refused to take the oath from the former five judges and now swiftly, late in the evening immediately prior to the Tribunal’s hearing, accepted the oath of four of the judges chosen by PiS (and the fifth a few days later).

Then came the Tribunal’s judgement which found that the former government’s appointment of two judges to replace judges whose term ended in early December had been unconstitutional.  However, three judges were filling posts which became vacant before the new government took office, and therefore their appointment had been constitutional.

This means that three judges are Constitutional Tribunal judges and cannot be removed from their posts.  Although they cannot serve as judges without their oath being taken, the President has no right to decide which judges he will swear in.

By continuing to refuse to take their oath, Duda is in breach of the law and could one day be held accountable for this.  At present that is inconceivable, since he and the new PiS government are acting in tandem.

According to the Constitution, Tribunal judgements are final and binding on all citizens.  They also come into force when published, and for 10 days the government dragged its heels on this.

Finally one of the opposition parties Nowoczesna (which has, incidentally, gained huge popularity over the last weeks, according to opinion polls, as that of PiS falls) made a formal complaint to the Prosecutor General’s Office with the latter announcing that an investigation was being initiated.

A day or so later, on Dec 13, the judgement was published.  PiS announced at the same time that it was introducing a bill with amendments to the Law on the Constitutional Tribunal, and produced its proposed bill late that evening.  With few changes, it is those amendments that have now been passed without public discussion and at breakneck pace.

According to the law just pushed through, 13 out of the 15 Tribunal judges will have to take part in any hearing, and decisions must be taken by a two-thirds majority.  This does not comply with the Constitution which states that a simple majority of judges must be in agreement.

These requirements in themselves will be sure to significantly hamper or even paralyze the Tribunal, preventing it from carrying out its function which is, in part, to protect citizens’ rights against actions taken by those in power.  It seems likely that some contentious judgements will be simply blocked altogether.

Just as disturbingly, the President and the Justice Minister can make submissions to have disciplinary proceedings brought against a judge.  In this case, a simple majority could apply to the Sejm to have the judge removed.  There is nothing in the Constitution which envisages such parliamentary powers.

The Tribunal has also been prevented from determining the order in which it examines submissions, making it impossible for it to fast-track urgent cases.  Since the other requirements brought in are expected to make the Tribunal about three times as slow in examining submissions as now, urgent issues could await consideration for a very long time, before then running up against an insurmountable 2/3 majority requirement.

There is no vacatio legis, or period allowed between adoption of the law and when it takes legal effect.  This runs counter to current Tribunal practice, and most importantly means that the Tribunal could be prevented from determining whether the law so recklessly pushed through this week complies with the Constitution.  Under the new rules, it might take years to get to this.

Confident of their majority in parliament, PiS has simply ignored all requirements for passing such an important bill, including the call from Anne Brasseur, PACE President to not “enact – precipitously – legislation relating to the Constitutional Tribunal which may seriously undermine the Rule of Law”.

The various bodies, such as the Supreme Court, which are legally obliged to be asked for their assessment, were given a day to review the first version of the draft and no opportunity to view any later amendments.  Despite this, the Supreme Court, the National Council of the Judiciary of Poland; the Polish Bar Council and the Prosecutor General all sent their opinion that the law was in breach of the Constitution.

It was indicative that on Monday, the PiS members of the parliamentary commission which was supposed to be preparing the bill for its second and final votes simply refused, over a period of 8 hours, to let Marcin Szwed, the Helsinki Human Rights Foundation’s constitutional law expert take the floor and express grave concerns over the bill.   “It would be difficult to find more convincing evidence of how the voice of citizens is treated in a case so vital for human rights and freedoms”, Danuta Przywara, the Head of the Foundation commented.

The Helsinki Foundation had, together with Amnesty International in Poland, the Stefan Batory Foundation and the Institute of Public Affairs, called for public hearings on the bill.  The Helsinki Foundation’s assessment of the bill is quite unequivocal.  The PiS amendments are unconstitutional and seem aimed at destroying rule of law.   Concern is expressed only the possibility, for example, of the Sejm removing judges, which conflicts with the fundamental principle of Tribunal and judges’ independence.  The fact that the President and Justice Minister can apply for disciplinary proceedings can also be used to put pressure on judges.

And will be used, since the current Minister Zbigniew Ziobro has made no secret of his determination to get rid of the current President of the Tribunal Andrzej Rzeplinski.

This is only one of a number of disturbing similarities to the situation in Ukraine after Viktor Yanukovych was elected President in 2010.  Within months laws had been passed seriously undermining judicial independence and also removing most powers from the Supreme Court whose head, Vasyl Onopenko could not be easily ousted.   It took a terrifyingly short amount of time for Yanukovych and his regime to reign in the judiciary, the media and to install ‘reliable’ people in all positions of power.

PiS has already announced plans to get rid of about 1500 civil servants, with these to be replaced without any competition.

The similarities with Ukraine under Yanukovych, however, highlight fundamental differences.  Whereas in Ukraine (and, unfortunately, abroad) for a long time only isolated voices were heard warning of the dangers, in Poland there has been a huge amount of protest from the population as a whole, and from legal quarters, including the above-mentioned judicial bodies.

It is likely that public protest was exacerbated by the words of Jarosłąw Kaczyński, the PiS leader widely believed to call the shots in the party when asked about the first huge protest in Warsaw.  He called the protesters ‘the worst sort of Poles’, then later ‘communists and criminals’.

Those whom Kaczyński called the worst sort were out in their thousands in 23 cities of Poland on Dec 19, chanting “Democracy”, “Constitution” and “Rule of Law”.

A number of former members or heads of the Constitutional Tribunal have expressed deep concern over the government’s actions, and not one has come out in their defence.

Professor Andrzej Zoll, a former President of the Tribunal warned on TVN 24 that if the law gets passed, Poland will be thrown out of the Council of Europe.

He did however hold out some hope, pointing out that the Tribunal’s judges are bound by the Constitution, not by this law.  They must ensure that what he calls “this totally unconstitutional law” is placed on the agenda and passed judgement on.  The President, the Prime Minister Beata Szydło and the Sejm will, sooner or later, have to answer for their unconstitutional acts.

Professor Zoll stressed that the Tribunal is there to protect citizens.  “Its absence makes us defenceless against actions infringing fundamental civil rights and freedoms. This is a defeat for citizens, not some kind of state institution”, he said.