Russia’s last Yukos Victim Aleksei Pichugin has spent 14 Years Behind Bars without a Fair TrialFascists And Evil Americans: Ukrainian Separatists Launch Magazine For KidsSolidarity & asylum needed as Russians face persecution for opposing aggression against Ukraine26. Rights of prisonersPussy Riot members jailed for six more monthsIndependent: Trial puts Tymoshenko back in the spotlightLeonid Parfyonov scathing about the state of Russia’s television newsTV-managed democracy coming soon to nationCourt finds assault on journalists obstruction of their professional activitiesIn Memory of the Victims of the Solovky embarkation point
• Topics / News from the CIS countries

18-year-old Russian hounded for supporting Ukraine has killed himself 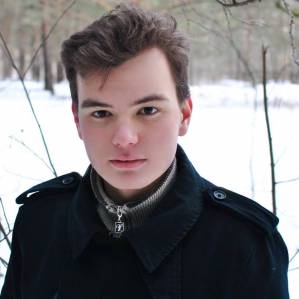 Radio Svoboda that 18-year-old Vlad Kolesnikov has killed himself 6 months after his defiant demonstration of opposition to Russia’s annexation of Crimea lost him his home, his place in technical college and led to a campaign of harassment against him.  Vlad took an overdose of medication on December 25.

Vlad ell beyond Russia in June for daring to wear a T-shirt with the Ukrainian flag and the words “Return Crimea” on it, as well as posting an anti-war banner at his technical institute in Podolsk.   Vlad recalled the sheer hatred in the face of a school official after the latter saw his T-shirt, and he was first threatened by another student then attacked by a group of classmates.  The police then got involved but were mostly interested in where he’d got the T-shirt.

It was after this attack that his grandfather with whom he was living learned of Vlad’s views and supposedly seditious behaviour.  The former KGB officer and staunch supporter of the current regime effectively renounced his grandson altogether, using horrific abuse against him, called him an enemy and traitor,   and ensuring that he was removed from the college, formally “at his own wish”.  He was sent to his father in Zhygulyovsk (Samara oblast) and obviously had just as much difficulty finding a common language with relatives there.

Back in June, he told Radio Svoboda correspondent Dmitry Volchek that all democrats in Russia had been exiled for their views, and that he too felt that he was being sent into exile.

He had earlier also aroused the fury of local officialdom when called to the military recruitment commission to undergo a medical examination and get his conscription papers.

He told Volchek that he had played the Ukrainian national anthem on his cellphone, and said that he considered it shameful to fight in the Russian Army.

The recruitment people decided to avoid further discomfort with the young man by thrusting him a form stating that he had a ‘personality disorder’.

It is hideously poignant now reading both the reports from June this year, and .  In June, he had received a lot of international support, and had a huge number of Facebook ‘friends’ and followers.

He probably also had nobody around him to provide him with any real support or from whom he didn’t feel totally alienated.

At one stage he was even prevented from writing on Facebook, but over recent months he had followed what was happening in Russia, reporting on the imprisonment of Ildar Dadin, the arrest of the Director of the Ukrainian Literature Library and a lot more.

One of the people who writes under Vlad’s last entry says: “There are no words, only a sense of shame for a country that kills its future”.

Светлая тебе память, Влад!     It means so little, but you will be remembered, and much missed