Amnesty International accuses Russia of deliberately bombing civiliansNATO Commander: Russia uses Syrian refugees as ’weapon’ against WestRussia bombs Syria & uses refugees as a weapon while denying them asylumAppeal from AleppoRussia effectively admits to using Zaporizhzhia nuclear power plant as a military base Conflicting values and conflicting narratives: the case of Russia’s war on UkraineRussian legislative changes would mean school leavers can officially be sent to fight in Ukraine Russia lavishly pays Wagner Unit mercenaries to bomb and kill Ukrainians International appeal: ‘Let’s not get into the wrong fight! We must support the Ukrainians without thinking twice or holding back’Oksana Stomina: This is medieval cruelty, multiplied by modern possibilities and sick, maniacal ambitionsRussian soldiers risk prison or injure themselves so as to not fight in Ukraine Global Initiative ‘Breaking the Vicious Circle of Russia’s Impunity for Its War Crimes’ (also known as ‘Tribunal for Putin’)Children among the dead after Russian invaders opened fire on fleeing civilians Amnesty International: ескалація збройного конфлікту в Україні матиме руйнівні наслідки для прав людини в усьому світіCrimean Tatar sentenced to 6 years for involvement in legal Ukrainian organization A brief description of the KHPG strategic litigations in July–December 2020Crimean Solidarity journalist on ‘trial’ for not denouncing a social media contact to Russia’s FSBRussian ‘pride’ over invasion and annexation of Crimea is fading fastCrimean Tatar political prisoner Medzhit Ablyamitov’s mother has died two months after his arrestRussia accuses Netherlands of hostile actions in seeking justice for MH17 victims
• Topics / News from the CIS countries 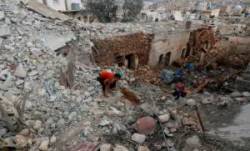 Residents at a site in the town of Darat Izza, which they say was hit by Russian air strikes on 7 October © Reuters/Ammar Abdullah

Russian authorities appear to have fabricated information to deflect criticism

Russian air strikes in Syria have killed hundreds of civilians and caused massive destruction in residential areas - striking homes, a mosque and a  busy market, as well as medical facilities - in a pattern of attacks that show evidence of violations of international humanitarian law, said Amnesty International in a new report published on 23 December.

Amnesty’s 28-page report - ‘Civilian objects were not damaged’: Russia’s statements on its attacks in Syria unmasked - highlights the high price civilians have paid for suspected Russian attacks across the country, focusing on six attacks in Homs, Idleb and Aleppo between September and November, attacks which killed at least 200 civilians and around a dozen fighters.

The report includes evidence suggesting that Russian authorities may have lied to cover up civilian damage to a mosque from one air strike and a field hospital in another. It also documents evidence suggesting Russia’s use of internationally-banned cluster munitions and of unguided bombs in populated residential areas.

Amnesty has interviewed eyewitnesses and survivors of attacks, and has examined video evidence and images showing the aftermath of attacks, aided by analysis by weapons experts. The attacks were identified as suspected Russian air strikes by cross-referencing details of each attack with statements from the Russian Ministry of Defence announcing “terrorist” targets struck, or from details about the nature of the attack in witness testimony. Amnesty research into these strikes indicate that there were no military targets or fighters in the immediate vicinity of the areas that were struck. This suggests the attacks may have violated international humanitarian law and may, in some circumstances, constitute war crimes.

In one of the deadliest attacks documented in the report, three missiles were fired on a busy market in the centre of Ariha in Idleb governorate killing 49 civilians. Witnesses described how within seconds the bustling Sunday market turned to a scene of carnage. Mohammed Qurabi al-Ghazal, a local media activist, said:

“In just a few moments, people were screaming, the smell of burning was in the air and there was just chaos. There was a primary school nearby, and children were running out absolutely terrified … there were bodies everywhere, decapitated and mutilated.”

Al-Ghazal said he saw one woman sitting and crying beside 40 bodies lined up in a row. She had lost her husband and three children. “Her children were literally in bags. To this day, I cannot get over it.”

In another suspected Russian attack, at least 46 civilians - including 32 children and 11 women who were sheltering for safety in the basement of a residential building - were killed on 15 October in al-Ghantu in Homs. Video footage of the scene after the attack shows no evidence of a military presence. Weapons experts who analysed images of the attack said the nature of the destruction indicated possible use of fuel-air explosives (also known as “vacuum bombs”), a type of weapon particularly prone to indiscriminate effects when used in the vicinity of civilians.

And in another attack, five civilians were killed and a dozen homes were destroyed when a suspected Russian sea-launched cruise missile struck residential buildings in Darat Izza in Aleppo governorate on 7 October. A local witness, who confirmed the area struck was residential and that there were no nearby military bases of any armed groups, said:

“It felt very different from other air strikes … the ground shook like an earthquake … this was the worst destruction I had seen … A mother and her two children were killed in one house and a young couple in another house. The couple were married about a week before the attack.”

Suspected Russian air strikes have also struck hospitals. Medical facilities have special protection under international humanitarian law, and attacking them can amount to a war crime. A witness to an attack just a few metres from Sermin field hospital in Idleb said the attack appeared to have been carried out by a more sophisticated plane as they did not see or hear the plane before the missiles were dropped.

“Some Russian air strikes appear to have directly attacked civilians or civilian objects by striking residential areas with no evident military target and even medical facilities, resulting in deaths and injuries to civilians. Such attacks may amount to war crimes.

“It is crucial that suspected violations are independently and impartially investigated.”

The Russian authorities have claimed that their armed forces are only striking “terrorist” targets. After some attacks, they have responded to reports of civilian deaths, by denying they killed civilians, and after others they’ve simply remained silent.

Russia’s reaction to an attack on Omar Bin al-Khattab mosque in central Jisr al-Shughour in Idleb governorate on 1 October raises serious questions about the tactics it is prepared to deploy to deflect criticism of its operations. After reports and photos of the destroyed mosque emerged, the Russian authorities responded by calling it a “hoax”, presenting a satellite image purporting to show the mosque still intact. However, the mosque shown in the image was a different one from the one destroyed in the attack.

“By presenting satellite imagery of an intact mosque and claiming it showed another that had been destroyed, the Russian authorities appear to have used sleight of hand to try to avoid reproach and avert scrutiny of their actions in Syria. Such conduct does not cultivate confidence in their willingness to investigate reported violations in good faith. Russia’s Ministry of Defence must be more transparent and disclose targets of their attacks in order to facilitate assessment of whether they are complying with their obligations under international humanitarian law.”

Since a Russian fighter jet was shot down by the Turkish air force on 24 November, Russia’s Ministry of Defence has released even less information about its campaign in Syria than it did before then.

Amnesty has also gathered evidence, including photos and video footage, suggesting Russian forces have used unguided bombs in densely-populated civilian areas, as well as internationally-banned deadly cluster munitions. Cluster munitions are inherently indiscriminate weapons that must not be used in any circumstances. Each cluster bomb scatters scores of bomblets over an area the size of a football pitch. Because of their high dud rate they pose a continuing threat to civilians for years after their initial use. The repeated use of unguided bombs in the vicinity of densely-populated civilian areas would violate the prohibition of indiscriminate attacks.

Philip Luther said:  “Russia must end indiscriminate and other unlawful attacks. They must halt all use of cluster munitions and stop dropping unguided bombs on civilian areas.”