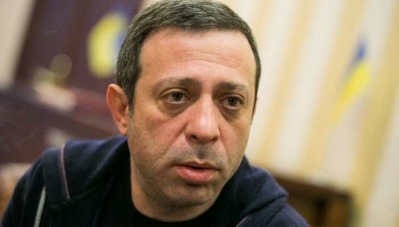 Human rights groups and lawyers have condemned the latest moves in the prosecution of Hennady Korban, politician and close associate of oligarch Igor Kolomoisky.  Concerns over the totally unacceptable methods used to force Korban from hospital into court and remand him in custody have not been assuaged by the news that even the house arrest restrictions against Olena Lukash, Justice Minister under the regime of Viktor Yanukovych have been removed.  Despite having been on the wanted list over her believed role in crimes against Euromaidan activists, Lukash is charged only with economic crimes.

Korban was arrested on Oct 31, with the Prosecutor General’s Office and SBU [Security Service] holding a special press briefing at which they called the move a ‘special operation’ against a criminal group and emphatically denied any political motivation.  Korban served as a Deputy Governor of Dnipropetrovsk under Kolomoisky until the latter was removed, having fallen out with President Petro Poroshenko.  He is also the head of the new opposition UKROP Party, which is heavily financed by Kolomoisky, and members of the party reported being subjected to searches that day as well.

Korban is also a millionaire with a fairly chequered history and specific reputation, so although some asserted that the President was attacking a powerful enemy, others were cautious about jumping to any conclusions.

The charges mentioned related to 2014/15, the period when Korban was deputy to Kolomoisky.  He is accused of kidnapping (Article 349 of the Criminal Code); creating a criminal organization {Article 255 § 1) and appropriation, embezzlement or seizure by abuse of official position (Article 191 § 5)  (details can be found at: Ukrainian political party leader detained).

After considerable controversy, Korban ended up under house arrest, with this due to end on Dec 31.  The prosecution was demanding that he be placed in detention, claiming that he was “trying to influence the investigation” (one of the grounds in the Criminal Procedure Code for detaining a person).

The court hearing on whether Korban was to be remanded in custody began on Dec 26 in the Dnipro District Court, however Korban was taken ill and an emergency doctor who, according to UNIAN, was there with Korban, insisted that he needed emergency treatment.  The ambulance was, however, initially prevented from leaving the court territory.  He did finally end up in the Amosov Institute Hospital, with the hearing adjourned until Sunday morning.

Korban was earlier diagnosed with coronary artery disease.  Kharkiv Human Rights Group lawyer Hanna Ovdiyenko reports that in hospital he had just had a coronary stent placed in the coronary arteries to keep them open and reduce the threat of a heart attack.  This was clearly not the moment to be pulled out of his hospital bed.

Ovdiyenko writes that at around 2 a.m. on Sunday morning, a person from the prosecutor’s office turned up at the hospital and read out a court order for a forensic medical examination.  At midday, this was carried out and confirmed high blood pressure, the need for the treatment given and the fact that Korban could not be discharged in such a state.

She points out that none of the grounds for remanding a person in custody can apply to somebody who is ill and in need of hospital care.  Despite this and the fact that there were still 5 days remaining until the end of Korban’s house arrest, seven hours later he was taken by force to the court. 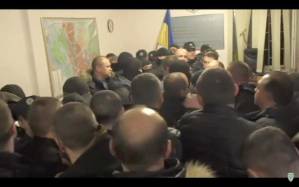 There are grave concerns about numerous aspects of that highly specific hearing.  Later in the evening, a bunch of ‘titushki’ or hired thugs burst into the courtroom, and according to UNIAN beat people, including journalists.  They were finally fended off by Korban supporters using a fire extinguisher.  UNIAN reports that the police did nothing and simply watched.  The events can be watched here  https://youtube.com/watch?v=hAroiy0ScBM

While doing nothing to stop the titushki from getting in, the police are reported to have kept out two teams of doctors who had arrived to take Korban to hospital.

Most incredibly, the hearing lasted 30 hours, ending finally with his being remanded in custody.  During this time, Korban was not allowed access to doctors from a private clinic and obstruction was put in the way of his being moved to the resuscitation vehicle.  All of this is in breach of Ukraine’s healthcare legislation, as was the failure to hospitalize Korban after he lost consciousness for over 20 minutes.

There are clear violations here not only of fundamental norms of Ukrainian legislation, but of the European Convention on Human Rights.  In a statement on the events, KHPG has pointed out that a 30-hour hearing under such circumstances can be considered cruel and inhuman treatment, and potentially places a person’s life in danger.  It calls for Korban’s immediate transfer to hospital.

The statement from the Centre for Civil Liberties was extremely succinct, and left the last words to be added by the reader.  After referring to the court hearing as “the final destruction of the remnants of the justice system”,   the authors wrote “if the court and law enforcement systems are not totally revamped in the near future, then everything …”   Colleagues have, however, noted that in fact the earlier court hearing in November on a restraint measure was entirely fair and in full accordance with the law.

The arrest of an opposition politician is likely to arouse attention in any country, and how much more so in Ukraine, which is all too slowly removing the legacy of politically motivated prosecutions, puppet courts, etc. under Yanukovych.

At a briefing given by the Prosecutor General’s Office on Dec 29,  supposed evidence of Korban’s guilt and of his corrupt dealings with particular opposition MPs, was presented.  Whether or not the material is genuine, and one of Korban’s lawyers Oksana Tomchuk, says that it is not, the place for presenting it was the court, not a public briefing.  The officials would have done better to have addressed the serious concerns raised by human rights groups and note KHPG’s warning that total disregard for the law demonstrated by the authorities will arouse warranted suspicion that political motives are at play.

Ukraine has been there, and its leaders would do well to remember that this is a road that was emphatically rejected two years ago.