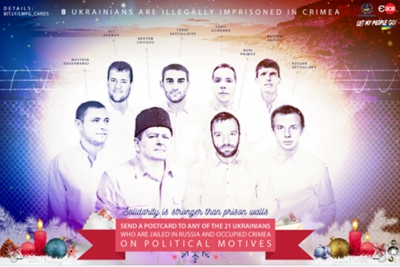 LET MY PEOPLE GO (#letmypeoplego) is a civic campaign initiated by Euromaidan SOS, and seeking the release of all Ukrainians held illegally on politically-motivated charges in Russia or Russian-occupied Crimea  .

Russia has systematically prevented media openness and obstructed access to occupied Crimea, making it very difficult to follow prosecutions which are clearly politically motivated.  There are currently eight people known to be in detention on gravely flawed charges, with one trial just beginning and that of the alleged members of Hizb ut-Takhrir likely to begin shortly.

Please help break through Russia’s information blockade and tell people – politicians, the media about these prosecutions.

All are spending New Year away from their families, and some have small children.  Please also write and show them they’re not forgotten.  You can either join the #Letmypeoplego Marathon and send greeting cards, or use the suggestions below.

The Crimean Tatar Mejlis has kindly promised to pass on all letters, so just send the letters / cards to the following address in Kyiv, with the name of the particular person written as indicated below (the year in brackets is their year of birth, and is used when writing to people held in detention or prison).

Since the letters / cards need to be in Russian, if this is difficult, then the following would be fine in all cases.

All of the cases involving Ukrainian nationals imprisoned unlawfully in Crimea or Russia are lawless, but this prosecution is probably in a league of its own.

The trial began on Dec 28, with the judge simply ignoring the valid application to terminate all prosecutions on the grounds that they directly breach Russia’s Criminal Code (Article 12 § 3).

Four Crimean Tatars -  Nuri Primov; Ferat Saifullayev, Rustem Vaitov and Ruslan Zeitullayev are charged with organizing and / or taking part in the activities of Hizb ut-Takhrir, an organization that is legal in Ukraine and other countries.

Russia has labelled the organization as terrorist yet has never provided any evidence of terrorist activities.  It has also sentenced people in Russia to terms of imprisonment for mere involvement in the organization.  This has been condemned by the Sova Centre, while the Memorial Human Rights Centre has declared all those convicted of ‘terrorism’ for their involvement in Hizb ut-Takhrir to be political prisoners.

It is not in fact clear that all of the four men are members of Hizb ut-Takhrir, and the methods applied to frighten people from attending the detention hearings suggest that there are no grounds for criminal charges against the men at all.

Imprisoned for an article condemning Russia’s annexation of Crimea

Worryingly little information is available about Yury Ilchenko, a Sevastopol teacher and blogger, arrested on July 2.

In true Soviet style, the investigators have come up with ‘non-political’ charges, which are reported to have been laid after Ilchenko’s friend was put under pressure to allege improper behaviour towards her 12-year-old daughter.

It is very clear, however, that Ilchenko and his father had faced a search and interrogations where the questions were about material Ilchenko had written in which he expressed opposition to Russia’s actions.   There are also indications that the FSB sent somebody to try to provoke him into statements that could have resulted in terrorism charges.