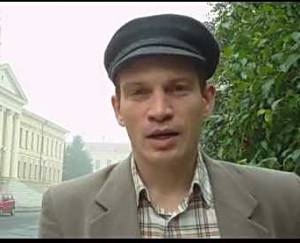 35-year-old Vadim Tyumentsev from Tomsk (in Siberia) has become the latest Russian to receive a serious prison sentence for calls to peaceful protest and critical comments on the Internet regarding Russian military aggression in Ukraine and pro-Russian separatists.   Tyumentsov, who has been in detention since 28 April this year, was declared a political prisoner by the renowned Memorial Human Rights Centre in November.

Tyumentsev was charged with ‘public calls to extremism with the use of the Internet’ (Article 280 § 2) and under Article 282 § 1 (‘inciting enmity or hatred, denigrating people on ethnic grounds).   He denied the charges which were based on two video clips posted on YouTube and his VKontakte social network page.  One called on Tomsk residents to come out on an “unauthorized” protest against a hike in public transport costs and reduction in safety, and called the heads of the city and oblast corrupt.

In the second Tyumentsev protested against the arrival in the Tomsk oblast of refugees from Donbas in eastern Ukraine.  He blamed them for the armed conflict in Donbas and accused them of treason against Ukraine, demanding that they be removed.

Memorial believes that there are no grounds whatsoever for the charges of ‘public calls to extremism’, and that the only charges “even theoretically” conceivable would be under Article 282 with respect to the comments about people from Donbas.  Memorial says that the contentious nature of some of these comments do not stop them from recognizing Tyumentsev as a political prisoner, since nowhere was there any call to violence.

The human rights defenders stress that calling on people to take part in an unauthorized protest can hardly be called a public call to extremism.  They point out also that the boundaries of acceptable criticism are broader with respect to public officials.

Memorial is also concerned that Tyumentsev’s right to defence was restricted.  He was represented by a lawyer appointed by the court, who was forced to sign an undertaking not to reveal any details of the case.  The judge rejected the application of two people willing to act as civic defenders (a status allowed for in Russian legislation.).

Back in November Memorial called for the charges over the public transport protest to be withdrawn, and for a proper examination under one artcle of the video clip to residents of the Donetsk and Luhansk oblasts.

Instead Tyumentsev was convicted of all the charges, with the resulting 5 year sentence even more than demanded by the Prosecutor.  The court on Dec 30 also prohibited Tyumentsev from posting material on the Internet for 3 years and ordered that he pay court and legal expenses – for the lawyer it provided, after refusing to allow civic defenders willing to represent him free of charge.

The video saying that the people from Donbas should get out of Tomsk seems to have been blocked.  It is, however, clear from reports that Tyumentsev was criticizing Russian aggression in Ukraine and considered those people being brought to the region as supporting the Kremlin-backed militants in Donbas.  It is, of course, very likely that Tyumentsev is unfair, and that not all those arriving as refugees had supported the Kremlin-backed militants.

It may well be relevant that in 2014 Tyumentsev was one of the Siberians who endeavoured to hold a march in support of greater federalization.   At a time when Russian President Vladimir Putin was aggressively demanding federalization in Ukraine, the Russian authorities reacted in repressive and thoroughly excessive manner to an initiative seeking no more than a greater say over what happened at regional level.   Tyumintsev is a civic activist who also opposed Russia’s war against Georgia in 2008.

This new sentence comes a week after another Russian involved in attempts to hold a federalization march was sentenced to 2 years imprisonment, also for the same supposed ‘public calls to extremism’.  The charges against Darya Polyudova related to three ‘incidents’.  She had held a banner during a single-person picket on April 4, 2014, saying “No war against Ukraine, but revolution in Russia! No war, but revolution”!  She had shared somebody else’s post containing the phrases “Wake up, people! Why can we not get rid of Putin and then make a socialist revolution?!!! Enough sleeping! It’s time to go out onto the square and overthrow this regime””.  A third repost was of a picture with the words: “Ethnic Ukrainians of Kuban want to join Ukraine”.

In June 2015, a Russian court sentenced 56-year-old Rafis Kashapov to three years imprisonment over social network posts criticizing Russia’s annexation of Crimea and aggression in eastern Ukraine.  These were demed to have been ‘public calls to violate Russian territorial integrity’ and ‘hate speech’ They can be viewed here and should be shared widely as indicators of the kind of criticism of Vladimir Putin and Russia’s annexation of Crimea that can land a person in prison for years.