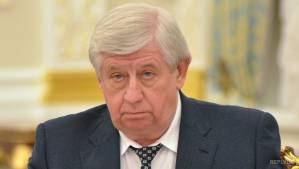 A system elaborately designed to ensure renewal of Ukraine’s seriously compromised prosecutor’s office has been effectively ignored by the Prosecutor General, with his office now trying to ensure that external controls over prosecutors will be withdrawn before they even began functioning.

Criticism of Ukraine’s Prosecutor General Viktor Shokin and calls for his removal have been heard ever since President Petro Poroshenko chose him for the post.   Legal experts, however, warn that without changes in legislation, and especially selection on a competitive basis, each person occupying the post will be like a reincarnation of the last. 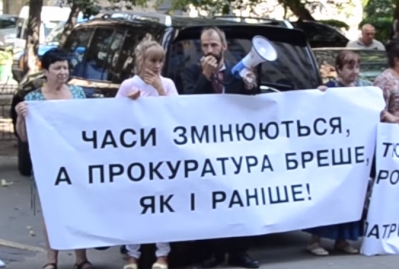 The times change, but the prosecutor’s office continues lying as before (from the demonstration here)

In an article just published, Oleksandr Banchuk from the Centre for Legal and Political Reform describes how Shokin has rendered meaningless the elaborate mechanisms devised for a competitive selection of prosecutors.

There was, however, still some hope for progress with a competitive selection process launched for staff of local prosecutor’s offices.

The initial phase reduced the number of prosecutors in the country by 2, 100.  On Dec 15, Banchuk explains, 155 local prosecutors began work.  There are a further 23 prosecutors for areas currently classified as occupied, i.e. Crimea and the parts of Donbas under the control of Kremlin-backed militants.

All city and district prosecutors had to take a test, with those receiving the worst results out of the running.  This resulted in a reduction of over 25% - from 7, 900 prosecutors to 5, 800.

Although rank and file posts were only available to prosecutor’s office employees, people outside the service could apply for managerial positions (prosecutor and deputy prosecutor), provided they had a legal education and five years relevant experience.

At the beginning, 60% of applicants were from outside the service.  After two phases of testing (on knowledge of legislation and general ability), only 22% of the overall number were outsiders.  The tests had been devised to minimize human factor, and therefore the results seemed to indicate that the candidates already within the prosecutor’s office were stronger.

The third stage in the competition was an interview, and here no optimism is possible.  One of the numerous flaws in the law introduced through lobbying from the largest factions in parliament came into play.  In five regional centres – Kyiv, Lviv, Kharkiv, Dnipropetrovsk and Odesa, the interviewing panels were made up of 4 representatives of the Prosecutor General, and 3 people representing parliament – politicians or even MPs.  The Prosecutor General’s people were there to defend the existing system to the end, the author says.

Even so, 3% of the candidates recommended by the selection commission were from outside the system.  They were ignored by the Prosecutor General who chose only people from those currently serving as prosecutors.

Banchuk concludes that the Prosecutor General ensured that the system remained intact and that candidates from outside were not taken on.

Shokin thus ignored the public’s demands for a clean-up of the prosecutor’s system.  Huge amounts of time and public funding had been spent on devising an objective and transparent system of selection, on interviews etc.  They might just as well have left the Prosecutor General to cement the status quo without all the pretence.

Banchuk is scathing also about President Petro Poroshenko who promised both the Ukrainian public and western partners that there would be reform of the prosecutor’s office and did not keep his word.

Banchuk also accuses prosecutors of lobbying a draft bill which would mean that they were not subject to control by the National Anti-Corruption Bureau and State Bureau of Investigations.

Both new bodies are independent with the scope to investigate crimes committed, among others, by prosecutors.

The Prosecutor General’s Office is seeking to strip those bodies of jurisdiction over prosecutors, instead creating a so-called General Inspectorate of Special Investigations, which would be responsible solely for investigating crimes committed by prosecutors.

Having chosen the prosecutors needed, Banchuk believes, the idea is now to ensure that there is no external control over them.

The amendments currently proposed to the Constitution remove excessive powers from the prosecutor’s office which should not have investigative departments.  The Prosecutor General’s activities are thus also placing the constitutional reforms in jeopardy, the author says.

One of the other proposed amendments is the removal of the possibility for parliament to declare a vote of no confidence in the Prosecutor General.  This possibility, Banchuk’s colleague Mykola Khavronyuk has pointed out, has only ever been used once. On Feb 22, 2014, parliament declared a vote of no confidence in Viktor Pshonka, Viktor Yanukovych’s Prosecutor General who had effectively already fled.   All other threats of such a vote have never materialized.

It is quite correct for this possibility to be withdrawn, however Banchuk has a point when he says that Shokin’s current sabotage of the reforms knocks any desire among MPs to waive the option of a vote of no confidence.

Banchuk is not alone in believing that the solution lies in the open competition for the post of prosecutor general long recommended by the Council of Europe’s Venice Commission.  Without amendments to the law on the prosecutor’s office allowing for selection on a competitive basis, the President will continue choosing a politically loyal candidate for the post, and “a collective Shokin will be reincarnated in each consecutive prosecutor general”.