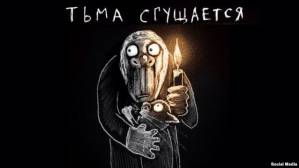 The vast majority of Crimeans are willing to forego electricity rather than sign a contract in which Crimea is referred to as part of Ukraine.  This, at least, is the result of a ‘survey’ carried out, processed and reported less than 24 hours after Russian President Vladimir Putin decreed that Crimeans’ opinion should be asked.  It was not quite on a par with dictator Joseph Stalin asking to know if anybody disputed his famous words that “life has become better and merrier”, but seriously difficult to imagine handing Putin anything but the ‘result’ produced.

The survey was carried out by the state-owned Russian Public Opinion Research Centre [WCIOM] whose site can be swiftly perused to gauge the reliability of its ‘findings’.   Many Crimeans would have been asked for their opinion as they tried to prepare for New Year celebrations in near darkness following another apparent accident on pylons bringing power from mainland Ukraine.  Ukraine is also, however, insisting - accurately -  that Crimea be identified as Ukrainian territory on any new contract for providing electricity, with the old contract having expired at the end of 2015.

Upbeat claims about the extremely modest amount of electricity provided by the so-called energy bridge between Crimea and Russia can only be maintained for so long when the electricity from mainland Ukraine stops altogether.  There is a limit to lies about overwhelming support as well, although the results of the blitzkrieg New Year survey will doubtless be pulled out to try to silence disgruntled voices.

TASS reported Valery Fedorov, head of WCIOM, as saying that 93.1% of Crimeans had expressed opposition to signing a contract stating that Crimea is part of Ukraine, with only 6.2% willing for it to be signed under those conditions.  A New Year present for the President, no less.

Not much more than a cheap propaganda stunt, however, since Crimeans were supposed to be asked if they could endure “temporary difficulties linked with minor disruptions to electricity supplies over 3-4 months”  rather than sign such a contract.  The difficulties are likely to be anything but minor, although that would hardly concern Putin who has already ordered thousands of tonnes of food from abroad to be destroyed in both Russia and Russian-occupied Crimea despite the large numbers of people living in genuine poverty.

Judging by tweets and comments on social networks, as well as attempts by Fedorov to defend the results, scepticism over this blanket support was widespread.  In an opinion piece on Radio Svoboda, Konstantin Verpritsky notes that WCIOM recently provided ‘results’ for the de facto Crimean leader Sergei Aksyonov’s annual press conference.  These claimed that from a survey of 1000 Crimeans, 89% had said that they are living well; 75% noted a number of positive changes in the last year; 82% positively assessed the situation in Crimea, and 93% “were willing to vote again to join Russia”.

The reaction from Aksyonov & Co. to first the goods blockade with mainland Ukraine, then the first energy disruption in November, repressive measures taken as obvious reprisals against Crimean Tatars, and reports from Crimeans suggest that the situation is very different from such commissioned surveys.

Russia is not allowing international monitors into Crimea, and recently tried to silence the main rights organization – the Crimean Human Rights Field Mission, labelling it an “undesirable organization”.  It is therefore next to impossible to assess what a genuine survey would find.

In March 2015, a survey on the always staunchly pro-Russian Krymskaya Pravda was removed after unwelcome results.  Readers had been asked how they would answer were a referendum to be held on Crimean status.  61% of the respondents said they would vote for greater autonomy within Ukraine, and only 19% would vote to join Russia.  Krymskaya Pravda claimed that the survey was the “latest provocation by enemies of Crimea”, however their account of an alleged DDoS attack (when the server is brought down through multiple requests) was at variance with the facts.

The results of the original ‘referendum’ used by Russia to try to give legitimacy to its annexation of Crimea must also be disputed.  A mere 10 days were given for preparing for the event with Crimeans asked to choose between two variants, with the status quo not given as an option.  As has been the case before and since with all Russia’s and Russian-instigated imitation votes, Moscow brought in European ‘observers’ from various fascist, neo-Nazi or neo-Stalinist parties, all of whom declared the so-called referendum to have been impeccably run.

If those politicians’ pro-Russian stance made their approval guaranteed, the situation with Putin’s own Human Rights Council proved less predictable.   They issued a report on a visit to Crimea in May 2014 in which they acknowledged that the official results had been incorrect.  Their assessment was that, while the overwhelming majority of residents of Sevastopol had voted to join Russia (with a turnout of 50-80%), the turnout for all of Crimea had only been 30-50% (against the 83.1% claimed) and only 50-60% of those voted for joining Russia (against the alleged 96.77%).  That is an especially low figure given that the Crimean Tatars, and many Ukrainians boycotted an event that was internationally condemned and bore no resemblance to a proper referendum.

With severe frosts possible at any time, it is a very serious thing for Crimea to be left without Ukrainian electricity. Russia exercises strict control over the media and will doubtless try to present Ukraine as the source of people’s woes, however Putin’s latest ‘people’s vote’ stunt places the onus of responsibility squarely on him.