Ukraine’s Mirko Sablich group have put out a new video clip exposing Russia’s lies over the so-called ‘humanitarian convoys’ illegally crossing into areas of Donbas under Kremlin-backed militant control.  The bitter satire was in response to a pathos-filled propaganda stunt on the Russian State-controlled Channel One in which the convoys are referred to as ‘brotherly aid’.  Both videos have been widely discussed on social networks.

There have thus far been 48 such convoys from Russia. The first, in August 2014, was closely followed by the international media, with relatively few journalists diverting their gaze to report the constant flow of Russian military trucks carrying men and military equipment across the same border.   The 280 trucks of the ‘humanitarian convoy’ were supposed to be checked near Kharkiv and reloaded onto International Red Cross trucks.  Instead the trucks suddenly changed direction entering the Luhansk oblast through the militant-controlled border.

Whether those 280 trucks were emptied before journalists got a chance to see them, or were always half empty remains an open question, as does the general content of the subsequent loads.  The first ‘convoy’ came only days before Russian soldiers were deployed in the disastrous battle and treacherous ambush of Ukrainian military near Ilovaisk.  Other convoys have also preceded reports of renewed fighting in Donbas.  A video posted on Jan 8 apparently showed militants unloading what they termed ‘New Year gifts’ for Ukraine’s President and others from another such convoy.  Both the comments from the militants, and the long crates visible, make it clear that the men are unloading weapons.

Another possibility considered in Ukraine, and by the independent media in Russia, is that the trucks have also been used to carry back to Russia the bodies of Russians killed in the fighting, and / or technical equipment, even coal, plundered from militant-controlled Donbas.

It remains possible that these ‘convoys’ at least some of the time do not carry anything sinister and that other methods are used to achieve what UN monitors in Nov 2015 described as the “inflow of ammunition, weaponry and fighters from the Russian Federation to the territories controlled by the armed groups”.   This inflow has resulted in armed forces fighting under the flags of the so-called ‘Donetsk and Luhansk people’s republics’ [DNR, LNR respectively] reported to “exceed the conventional armies of many European countries in terms of heavy artillery, multiple-launcher missile systems and combat armour.”

‘Humanitarian’ aid as a propaganda weapon 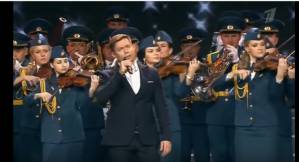 In September ‘LNR’ ordered Médecins Sans Frontières (MSF)  and all but one western aid organization to leave the Luhansk oblast, with ‘DNR’ doing the same a month later.  One claim was that the NGOs were “causing social disorientation”.

While expelling those carrying out vital humanitarian work, the militants and Russian media have been effusive in their praise of, for example, the two staunchly pro-Russian Germany Die Linke deputies who recently brought a second, probably Russian-funded ‘humanitarian’ load to Donbas, not to mention the Russian convoys.

The concert audience and Russian TV viewers of the concert on Dec 26, 2015, marking “Day of Rescuers”, were also supposed to view Russia’s involvement in the war in Ukraine as purely humanitarian, “brotherly aid”.  The convoys are described in glowing terms by the presenter, and then put to heart-rending song by Stas Piekha [Стас Пьеха] and the Emergencies Ministry Choir.  The whole performance is reminiscent of songs written after the Second World War, glorifying Russian soldiers.  Here it is the drivers of white convoys, called onto the road by ‘misfortunate’  who are to “deliver a load from the native land, our humanitarian convoy.”

The Mirko Sablich group have become famous for their bitingly satirical answers to Russian propaganda, and “Humanitarian Convoy” is no exception. The picture – of a truck with weapons inside -  says it all, but the video clip should be heard in full and then shared widely. 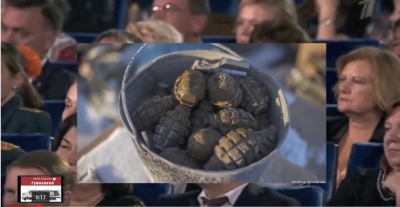 It begins in exactly the same place as the Russian Channel 1 clip with the presenters waxing lyrical about the ‘humanitarian supplies’.  With certain differences, however.  As the audience is told that the convoys brought ‘textbooks’, the viewer sees, the passenger bus hit by a militant Grad missile while standing at a Ukrainian checkpoint near Volnovakha (Donetsk oblast).  Then when the presenter talks of “toys for children”, we see grenades.

And then the singing begins, with the bitter satire heightened by the use of the same original footage from the propaganda event.   The lines below are sung twice.

When we took a humanitarian convoy …. I thought of my bitter fate.

It’s a simple arrangement, triple pay.  We take weapons there, and bring Cargo 200 back.  Why the hell, brother, tell me, am I putting my life on the line for the sake of the big Kremlin lie?

Those who incite war will always be called to answer, those thousands of deaths will pave our road to hell.

When we took a humanitarian convoy …. I thought of my bitter fate.

The last UN report spoke of at least 9 thousand deaths since Russian and pro-Russian armed groups seized control of parts of Donbas last in 2014, with another 20 thousand injured, many maimed for life.  Well over one and a half million Ukrainians have been displaced, first by Russia’s invasion and annexation of Crimea, then by the military action in Donbas.