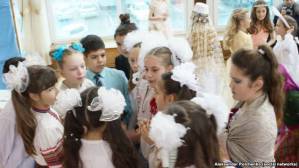 SIMFEROPOL -- A popular children’s drama school that staged Ukrainian-language plays in Crimea is shutting down after what its founders describe as a campaign of harassment from local officials on the Russia-annexed peninsula.

Svitanok (Sunrise) had taught children for more than 20 years and was a well-established institution in Simferopol, Crimea’s regional capital.

Its latest performance unexpectedly landed the school in the crosshairs of local culture officials, who reportedly accused Svitanok of promoting both Ukrainian nationalism and Western symbols.

Co-founder Oleksandr Polchenko says the play drew the ire of officials from the state-run Palace of Child and Youth Art, where the school is based.

"The next day, the management ordered us to hand over all the texts and scripts for the show, as well as a recording, " he told RFE/RL.

The play, Songs Of The Amazon, performed on December 19 to mark St. Nicholas Day, is based on a work by Crimean author Viktor Stus.

WATCH: Staging Songs Of The Amazon

It tells the story of Amazons -- the female warriors of Greek myth -- battling evil and fighting for freedom and the independence of their native land.

According to him, they took particular offense at the costume of a little girl wearing a golden crown and impersonating the sun, which he says they interpreted as a reference to New York’s Statue of Liberty.

"They were indignant, they asked what kind of propaganda of Western values we had staged for the holiday, " he said. "They also described the embroidered clothing and the Ukrainian-language scenario as brazen Ukrainian nationalism."

Polchenko believes it was only a matter of time before Svitanok closed shop. He says the incident followed months of pressure on the head of the drama school, his wife Alla Petrova.

"They tried to force Alla Petrova to leave in summer, and again in fall, " he said. "They conducted various inspections, they used every opportunity to find faults with her work, they insulted her, threatened her, and tried to lower her salary."

Polchenko describes the campaign against Svitanok as part of efforts by Crimea’s new Russian-backed authorities -- installed after Moscow’s annexation of the peninsula last year -- to "eliminate anything associated with Ukrainian."

He said Petrova had chosen to resign and announced her decision to parents on December 28.

"Of course parents as well as their children are trying to stop this destruction of all things Ukrainian on the peninsula, but they don’t understand how these Soviet-era KGB old-timers operate, " he said.

The attack on Svitanok, he says, is "another round of repression and persecution of anything that even remotely evokes the past and is connected with Ukraine."

The head of the department for culture and drama at the Palace of Child and Youth Art, Svitlana Alekseyeva, declined to comment, saying media requests should be addressed to the institution’s director, Valeria Kochetova.

RFE/RL tried to reach Kochetova’s office for two days, but its calls were not answered.

Crimea’s Culture Ministry, which oversees the Palace of Child and Youth Art, said it had no information regarding the situation around Svitanok.

Spokesperson Anton Garkavets, however, cast doubt on allegations that its woes are tied to language issues.

"Crimea has three official languages: Russian, Ukrainian, and Crimean Tatar, " he said. "We don’t have any persecutions on this matter."