Rigged and Secretive Fight against Corruption?Government accused of rigging anti-corruption selection commissionHead of Traffic Police Dismissed after Scandalous Lifestyle ExposedIt’s Tax Time In Ukraine, And Financial Discrepancies Suggest Corruption EnduresBehind the declarations: how public officials lived – and live nowParliamentarians’ secrecy regarding income given judicial OKVerkhovna Rada and Constitutional Court least willing to divulge public informationCourt rejects Verkhovna Rada claim that staffing details are not for the publicOPORA takes secretive Verkhovna Rada Office to courtCHESNO: Office of the Verkhovna Rada flagrantly violating Public Information ActUkrainska Pravda takes parliament to court over concealed informationResidences of Azarov, Lytvyn and Yushchenko to cost the taxpayer 50 million UAHCourt has no problem with parliament not handing over MP’s declarationsVerkhovna Rada Office refuses to hand over Deputies’ declarationsPublic Information Law like a Bolt from the Blue for the AuthoritiesCVU: Ukrainian authorities not ready to be openFirst legal proceedings over alleged infringement of Public Information LawStop Censorship will force Deputies to make their income declarations publicThe Public are most interested in how public funding is spentLaw on Access to Public Information: comes into effect
• Topics / Social and economic rights 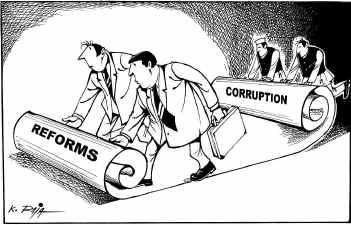 Transparency International in Ukraine has joined MPs in trying to find out how a norm appeared in Ukraine’s 2016 Budget allowing officials to defer making electronic income and property declarations until 2017.  It was Viktor Chumak, an MP from the President’s bloc and a member of the anti-corruption parliamentary committee who noticed the strange amendment on Monday.  The Cabinet of Ministers then denied any knowledge of the amendment, saying they had no idea who had added it.

Radio Svoboda that the members of the budget committee also claimed to not remember who had added the clause.  Even given the huge load of material that evening, such forgetfulness seems at very least strange given that new legislation has toughened up regulations on declarations, and any retreat from such anti-corruption legislation could have serious consequences for Ukraine’s chances of a visa-free regime with the EU.  An electronic declaration system is one of the specific requirements for such a regime.

Chumak said that he believed some of the members of the committee might have an interest in dragging out the electronic declarations so as to have time to re-register property, etc. in their families’ or relatives’ name.  It has taken literally years to achieve legislation demanding proper accountability, so no MP wishing to hide property has been taken unaware.  On the other hand, the difficulty experienced in getting anti-corruption legislation through was precisely because reluctance to come clean on income and outgoings crossed all party lines.

Mykola Skoryk, from the Opposition Bloc (formed after the dissolution of the Party of the Regions) claimed to Radio Svoboda that electronic declarations where you have to declare the property of all relatives are a form of surveillance, not means of fighting corruption.  He also complained that the form is not yet needed, with this probably used as the excuse for introducing the deferment.

Oleksy Khmara from Transparency International does not agree.  He says that electronic declarations are vital for implementing the new law which from this year introduces criminal liability for false declarations. You need to be able to access the declarations and compare them with other registers and databases in order to detect possible lies and concealment, he says.

Khmara did not name the person the activists suspect, but said that they believed it to have been one of the almost 50 MPs from the Opposition Bloc who have just made a submission to the Constitutional Court.  The opposition MPs want the Court to judge whether the requirement to make declarations is constitutional, as well as the introduction of criminal liability for lying on the declaration.

On Tuesday evening Chumak asserted that he knew who had brought in the amendment.  He named Andriy Derkach from Volya Narodu and Volodymyr Mysyk, an unaffiliated MP.

What is most worrying about this is neither parliament, nor the Cabinet of Ministers appear to have noticed the amendment which was passed, then signed into law by President Petro Poroshenko.  There are now promises all around that a new law will be swiftly introduced to knock out the illegal amendment.

The struggle to bring in serious requirements for declarations has been long and fraught.  If former Party of the Regions MPs are responsible for the constitutional challenge, shenanigans or at very least oddities on declarations have been detected with MPs from all factions.  In September 2015, for example, Serhiy Rybalka, an MP and sponsor of the populist Radical Party which came to power promising to radically combat corruption was reported to have concealed ownership of a flat in the centre of Paris worth well over a million EUR.

Most worrying, however, have been the allegations about possible rigging of the makeup of a commission responsible for selecting members of the National Anti-Corruption Agency which is to be responsible for checking income declarations. In June 2015, Transparency International in Ukraine, the Rehabilitation Package of Reforms [RPR] and other NGOs  about the role of at least some members of the Cabinet of Ministers, including Prime Minister Arseny Yatsenyuk.  They asserted that four of the members chosen were from NGOs which can be relied on to do what they’re told, while a fifth member was currently a civil servant.  This would mean that the government was using questionable means to appoint their people to the commission responsible for staffing an agency which will be monitoring them and other public officials.  The NGOs are still engaged in battle over this.