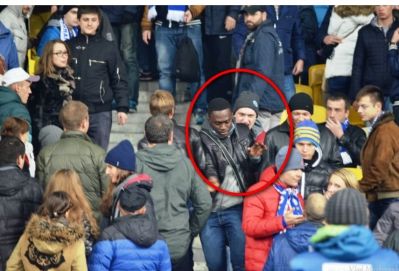 A 22-year-old man has received a 2-year suspended sentence, with a probation period of one year, for what the Kyiv prosecutor calls “causing a fight” during a Champions League football match at the Olympic Stadium in Kyiv on Oct 20.   At least five black football fans watching the match between Dynamo and Chelsea were attacked that day, together with people who intervened to protect them.  It is not clear what grounds the police and prosecutor’s office have for consistently talking of a ‘fight’ since numerous witness reports, as well as photo and video footage show four men being attacked in Sector 23, and at least one in Sector 19.   All of the men attacked were black, and according to Viacheslav Likhachev, head of the National Minority Rights Monitoring Group, there is video footage from TV 2 + 2, on which the assailants also chanted “White Power!”.

The attacks received wide coverage in Ukraine and abroad, and UEFA announced disciplinary proceedings soon after the event.  On Nov 25, 2015, it ordered Dynamo Kyiv to play their next three UEFA competition matches as host club behind closed doors and fined the club €100, 000.  The grounds given included “racist behaviour”.

Ukrainian football officials also seem to have been in no doubt about racist motives, although Volodymyr Spilnychenko, director of the Olympic Sports Complex, would have done better to remain silent.  He told journalists on TV 2 + 2 that it might not be a bad idea to create a special sector for black fans.  The press service later claimed that his words had been pulled out of context and that he was against any such creation of separate sections.

Likhachev notes that Oleksy Semenenko, Vice-President of the Dynamo Kyiv Club, suggested that the attacks had been “provocation”, an action arranged in advance by those with an interest in “spoiling the social situation of each Ukrainian citizen”.

What exactly this was supposed to mean remains unclear, however suggestions of ‘provocation’ obviously reached President Petro Poroshenko who on  Nov 22 stated that according to his information there were grounds for concluding that Russia was behind the last “provocation” at the Dynamo – Chelsea Match,   with the aim being of accusing Ukraine of racism.  The President informed that he had instructed the Police and SBU [Security Service] to thoroughly investigate the incident while expressing hope that UEFA would issue a balanced judgement.

Thus far there is no evidence that the police and SBU have done anything much since the charge of ‘hooliganism’ which the 22-year-old was convicted of corresponds to the initial criminal investigation from Oct 23.  The police reported then  that they had initiated a criminal investigation into what they described as a “fight between football fans”.  This, they said, was on the basis of Internet reports, since nobody had approached them over the attack.  Towards the end the police mention that “foreign football fans” were beaten, however no suggestion was made of any racist motive.  Four days later, Oleksandr Tereshchuk, head of the Kyiv Police,  told journalists that he did “not see any racism”, although he acknowledged that the conflict would be hard to call a fight.

This is what all outside observers have said, yet the Kyiv Prosecutor’s report on Jan 4, 2016, does say that the young man attacked fans, but then goes on to claim that he “caused a fight with fans”, using the word ‘fight’ twice.  There is no mention that the fans who were attacked, and who do not appear to have fought back, were black.

The prosecutor says that the investigation into actions by other “who took part in hooligan actions” is continuing.

As reported here, around a month after the attack, the journalist initiative #Bukvy published an article, backed by footage, implicating a police officer and parliamentary aide and members of the Azov Civic Corps (a support group for controversial Azov battalion) in the violence.  Bukvy presented numerous photos on open access, and asserted that they showed 22-year-old Vladislav Oliynyk,  a junior police sergeant and aide to MP Andriy Biletsky.  The journalists note that Oliynyk’s name is no longer mentioned on the Verkhovna Rada website, but he is still mentioned as a parliamentary aide elsewhere.

The Azov volunteer battalion aroused concern from the outset because of the pronounced neo-Nazi views of its leaders, including Andriy Biletsky.  This was exacerbated when Biletsky stood for parliament.   Like other people who have defended Ukraine in battle over the last 18 months, he was elected, but has since been noted even denying, albeit implausibly, his previous anti-Semitic views.

It is therefore of concern that Bukvy were able to point, not only to an aide to Biletsky, but also to a person they believe to be a leader of the Azov Civic Corps, as well as to an ex-Azov Battalion fighter.

People monitoring racism in Ukraine have thus identified football hooligans from neo-Nazi far-right gangs.  Any individual’s role must, clearly, be proven, however the ongoing attempts to either claim ‘provocation’ or deny racist motives are disturbingly inadequate and put people’s safety in jeopardy.