Afanasyev: I broke my chains when I retracted my testimony against Oleg Sentsov 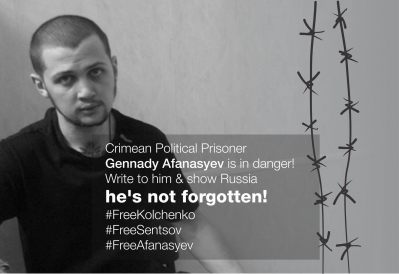 Gennady Afanasyev, one of the four Crimean political prisoners held in Russia for a non-existent ‘terrorist plot’, , dates his personal liberation from July 31, 2015.  On that day, he stood up at the trial of Ukrainian film director Oleg Sentsov and civic activist Oleksandr Kolchenko, and stated that he did not know the men and that all previous testimony against them had been tortured out of him.

“31 July 2015 was the day of my personal liberation, when I broke the chains inside and began living according to the truth, following the voice of honour”.

He has paid for his courage.  The Russian FSB were furious and put all kinds of pressure on him to retract his retraction, even threatening to harm his mother.  He has been sent to the Komy Republic in the far north of Russia, and placed in maximum security and very harsh conditions.

Even though there was no evidence against either Sentsov and Kolchenko, only the ‘confessions’ tortured out of Afanasyev and Oleksy Chirniy, which Afanasyev retracted in court (with Chirniy refusing only to testify in court), Sentsov was sentenced to 20 years, Kolchenko to 10..  The trial was condemned by Russian human rights activists as “ideologically-motivated state terror” against Ukrainians opposing Russia’s occupation of Crimea.

Afanasyev and Chirniy had had no access to proper lawyers, only those provided by the investigators, and gave testimony under severe torture.  Both are now serving 7-year sentences.

Alexander Popkov began representing Gennady after his courageous appearance in court.  In an interview to Radio Svoboda, he says that Russia wants these four Crimean political prisoners “to rot in Russian prisons”, with Ukraine and the world forgetting about them.

He confirms that Gennady’s psychological state is as before, and that he has become stronger in spirit since he rejected the testimony tortured out of him.  He is, however, facing serious pressure, Popkov warns, with penalties imposed on totally trumped-up pretexts.

There were compelling grounds for a retrial, including the fact that Afanasyev has effectively broken the deal made with the FSB who offered the minimum 7-year sentence for ‘cooperating’ with the prosecution.  All of this was, as reported, ignored with the cassation appeal rejected.  Popkov stresses that they are well-aware of the dire state of Russia’s justice system and the political nature of this case, and all their actions are carried out with the European Court of Human Rights in mind.

Afanasyev was placed in a general barrack with 50 other prisoners considered particularly persistent offenders (the young man had never had any problem with the police, and he is recognized as a political prisoner (together with Sentsov and Kolchenko) by the renowned Memorial Human Rights Centre   The men are not allowed to sleep during the day, and simply move around, from corner to corner of an enclosed area.  Medical problems, including a serious shoulder condition, are scarcely being treated.  The fact that he’s been placed in a maximum security prison means that it is even difficult to send him medication and other items, since the number of parcels is strictly limited, and any medicine needs to be first approved by the prison administration.

Popkov believes that Afanasyev could be put under pressure through other prisoners, but does note that Gennady has told him that there are some totally normal and decent people there who support one another.

In the above-cited ‘interview’ Afanasyev gave to Ukrinform, he explained how he had spent his 25th birthday on Nov 8.  His cellmates had even managed to prepare a birthday ‘cake’ in prison conditions.  He’d had a good day, he says, thanks to the good attitude and mutual support between the co-prisoners, but particularly thanks to the huge number of letters he received from all around the world.

Both Popkov and Olga Afanasyeva, Gennady’s mother confirm that the Ukrainian Foreign Ministry has become more active in trying to find ways to get the four Ukrainians (and all others illegally held in Russia) home.

The problem at the moment is that the case is entirely political and it is the Kremlin which will decide.  Pressure can, however, and must be laid on Russia to release the men.  It has been acknowledged by the Parliamentary Assembly of the Council of Europe that all these prisoners fall under the Minsk Agreement and should be released. Acknowledged, but seldom loudly stated, and more pressure needs to be placed also on international bodies to stress that Russia’s release of all Ukrainians illegally held must be a prerequisite for the removal of sanctions.

A MISCAST AND ABSURD ‘TERRORIST PLOT

The four opponents of Russia’s annexation of Crimea were arrested in May 2014, and held incommunicado for weeks before being taken to Russia, when on May 30 the FSB or Russian Security Service claimed that they had been involved in a ‘Right Sector terrorist plot’.  There was nothing to indicate any presence of the ultra-nationalist Right Sector in Crimea, and the idea that Kolchenko, who is a committed left-wing anarchist would have taken part in a far-right movement’s ‘plot’ was absurd.

All international bodies and democratic countries have publicly demanded the release of two men – Oleg Sentsov and Oleksandr Kolchenko as required by the Minsk Accords (and implicitly the other two when they speak of ‘all others illegally held”;

There was no evidence of any such plot, nor, as mentioned, any likelihood, given how far Kolchenko’s views are from those of the right-wing and ultra-nationalist Right Sector.

Oleg Sentsov and Oleksandr Kolchenko are currently in a transit remand prison, and it is not known where they will be sent.  For them, and Oleksy Chirniy, it is better at present to cut and paste the names as given below (the year of birth after their name is required by the prison service), but send letters in email form or attachments to post.rozuznik[at]gmail.com   They will deal with writing the envelope and sending it on.