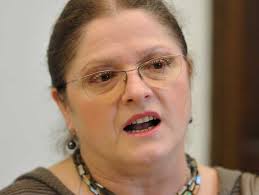 Facebook has banned a Polish civic activist for a month after he made a critical comment on the  Facebook page of Krystyna Pawłowicz, an MP for the ruling Prawo I Sprawiedliwość party [PiS].

Marcin Rey was concerned by Pawłowicz’s disturbing response to remarks by Jan Zyngra that not only he deemed anti-Semitic.  On his Facebook page, Zyngra often expresses views or posts material which a large number of people would consider to be anti-Semitic. He did so again in the  comment he added to Pawłowicz’s page. However, the Polish MP did nothing to distance herself from such remarks.

The only action from Facebook has been to ban Marcin Rey for expressing concern about such comments on the site of a PiS MP.  According to a friend of Rey’s, it was Zyngra who complained of ‘harassment’.

Krystyna Pawłowicz had shared a highly contentious talk she gave on the conservative Catholic Radio Marya in which she treats all opposition to the PiS government’s actions as a “modern Polish ‘Targowica’ of traitors [the term refers to a coalition of magnates that abetted the division of Poland in 1792).

Zyngra wrote under her post that it was all exactly as she said, and that he only hopes “that the Government has plans made, the force and means, and that it is determined to decisively use them if that left-wing Jewish-communist targowica goes further than just demonstrations and shouting. I personally think that in the current situation Polish can’t afford the luxury of democracy.”  He claims that all previous governments were periods of ‘occupation’ and believes that now radical measures are needed, not “democratic procedures”.

MP Pawłowicz ‘liked’ Zyngra‘s comment and replied that “We are trying to be radical and firm, also within the existing legal conditions. We don’t take prisoners of war.  The fight today is for everything, otherwise we’ll lose.”

Marcin Rey responded with criticism both of Zyngra and of Pawłowicz’s response.  The latter he suggested was far more worrying than an anti-Semitic nonentity.

The reaction by Facebook is baffling.  All comments remain on the MP’s page; only those by Rey have been blocked, and the activist is now banned from posting material on Facebook for a month. .

This is not the first time that Facebook’s actions in banning certain people or material, while others remain toxic and untouched have aroused concern.  In June 2015, the PEN American Centre and PEN Ukraine issued a statement expressing concern over reports that Facebook had removed content, deactivated or suspended accounts of Ukrainian and Russian users critical of the Putin regime. In February 2015, an attempt was made to ban a public page entitled Russian V Column in Poland [Rosyjską V kolumna w Polsce].  The page was the result of a civic initiative seeking to shed light on pro-Kremlin propaganda in the media, especially against Ukraine, on the role of Kremlin-paid Internet trolls on social networks and Russian links generally (see: Why did Facebook block a Russian Propaganda Watchdog?).

That time at least it seemed clear that the problem was in a fault in Facebook’s regulatory system with it dangerously easy for ‘Internet trolls’ to flood moderators with complaints about the site which then resulted in bans regardless of the merits of the complaints.

Here the situation is even more worrying.  Two individuals with public pages, one a Polish Member of Parliament made comments on Facebook that aroused legitimate concern.  Rey responded strongly, but without foul language or hate speech.  He, in fact, is basically a supporter of the PiS government, and saw his comments as constructive criticism addressed to a member of that government.  His views have, however, been blocked and are unavailable to the public.

Zyngra, on the other hand, is given a chance to express his opinions further.  He claims that Rey’s remains are defamatory, and that what he writes is not anti-Semitism, “only a statement of fact”.  That he has “the right to express his views based on the truth and work of excellent Polish historians, and in particular I have the right to criticize (those) Jews with animosity to Poland, the Jewish-communist regime and left wing and defend of their lying and defamatory propaganda aggression.”

The author of these words hopes that she will not also find herself banned, but is not prepared to post a translation of the rest of Zyngra’s response on a human rights (or any) site, and would strongly suggest that Facebook’s Polish administration examine it before others are banned for calling it anti-Semitic.

Rey assumes the ban to be linked to the comments about Zyngra. For those less positive in their assessment of the new government’s stance, it seems at least possible that they were prompted by Pawłowicz whose page is full of assertions that also arouse concern, coming as they do from an MP.   On Jan 6, she claimed that PO (the former party in power), the newspaper Wyborcza and ‘all those with post-communist mentality ARE WHINING at German – EU gates so that the latter FINALLY FINISHED THEIR INVASION of Poland and OVERTHREW the PiS government elected by Poles in last year’s free elections”.

A day later she uncritically reported an assertion from the new Minister of Defence Antoni Macierewicz, also on Radio Maryja, that “the group which lost the elections is now trying to persuade soldiers and functionaries of the Polish forces to REFUSE TO OBEY THE ORDERS of their superiors!.  Soldiers and functionaries – WHO did you vow LOYALTY to?  The POLISH REPUBLIC or GERMANY and its representatives in Poland?”

The views regarding recent events expressed by Pawłowicz,   like Zyngra’s, are not shared by the many thousands of Poles, including prominent cultural figures, former leaders of the anti-communist resistance, lawyers, academics and others, who have been protesting over specific actions and laws passed by the new government.  Many of the protesters’ concerns have been expressed by human rights organizations and EU structures.

If Pawłowicz and Zyngra’s views are allowed to be expressed without any interference on Facebook, then any attempt to block those criticizing them must raise very serious questions.