Remember Ilovaisk and don’t trust Putin’s call for safe passage!Russia’s Ilovaisk TreacheryThe Russian Invasion and Deaths Putin didn’t mentionRussian NGO has list of 400 killed or wounded Russian soldiersIf Russia is not at war, then who is in those freshly-dug graves?Macabre Convoy: Cargo 200 from Ukraine to RussiaInvasion by any other nameHalf-empty or half-emptied?Poland knows about Russian ‘humanitarian convoys’. It didn’t let one in.Stand up to Putin: buy Polish apples!No Sanctions Game Changer?Will the West sleep through this final wake-up call?Russian LifeNews inadvertently told the truth about downed Malaysian airlineMilitants accused of deliberately shooting at Severodonetsk residential areaSent to be shotThe EU’s Opaque Dealings with UkraineWhose anti-Semitic and Homophobic Choice?What should they talk about, Mr Putin?The Peace that chokes RussiaEU’s Clear and Consistent Capitulation?
• Topics / The right to a fair trial 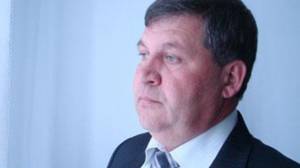 The Konstantinivka City Court has found no crime in the actions of Volodymyr Protsenko, Mayor of Debaltseve whom Ukraine’s Security Service accused of active involvement in the Kremlin-backed militants’ so-called ‘referendum’ of May 11, 2014 on the creation of ‘people’s republics’.  His acquittal on Dec 22 has only just been reported, almost exactly a year after Interior Minister Arsen Avakov announced Protsenko’s arrest in a Facebook entry entitled “Zero tolerance for treason to the country and people in wartime must be the rule”.

Avakov then asserted that Protsenko had been directly involved in organizing the ‘referendum’; that he had taken part in creating a so-called Debaltseve people’s militia and organized separatist checkpoints.  According to Avakov, Protsenko disappeared, simulating an abduction, after Debaltseve was liberated from the militants.  He then reappeared on Jan 22, 2015 and, in Avakov’s words, “made an attempt to destabilize the work of the city’s institutions and spread panic among residents, asserting that the city was surrounded.”  He was arrested the next day.

Debaltseve had been under militant control until July 2014.  It then came under intensive attack by pro-Russian and almost certainly Russian forces in January, 2015.  In February the ceasefire agreed by, among others, Russian President Vladimir Putin was first deferred for a couple of days, and then totally violated by the militants who continued their offensive and seizure of Debaltseve.  There were further statements of ‘deep concern’ from the UN Security Council and other bodies, but no more, and Debaltseve remains under militant control.

The court accepted that from March to May 2014 a terrorist organization calling itself the ‘Donetsk people’s republic’ [DNR] had been created, with this organization engaging in terrorism, intimidation of the population, murder of citizens and seizure of administrative buildings.

The prosecution asserted that on May 5 Protsenko had asked the Debaltseve Council to allocate premises for holding the so-called ‘referendum’ of May 11 on declaring state independence for ‘DR’.

The SBU [Security Service] asserted that there were records of the session confirming Protsenko’s role.

Protsenko denied any guilt and asserted that he had been pressurized both by around 400 people threatening to seize the building, then by armed men who turned up.  He maintains that he did not table the motion, nor sign it.   The court accepted this and acquitted Protsenko.

There is not enough information in the court ruling to understand the grounds on which the court rejected the case presented by the SBU.  There has been negative response to the ruling from Denis Kazansky, a well-known journalist and others.

There certainly seems very little pattern in Ukraine’s prosecutions over ‘separatism’ despite many overt attempts to forcibly seize power or call for such scenarios.  In June 2015, a person was sentenced to a year’s imprisonment for circulating leaflets calling for the Kharkiv and Sumy oblasts to secede from Ukraine.    There have been many other such convictions.

Ivano-Frankivsk blogger Ruslan Kotsaba has been in detention now since February 2015, on highly contentious charges.  He is accused of state treason and espionage, or obstructing the lawful activities of the Armed Forces and other military formations.  Kotsaba’s views, as well as his willingness to cooperate with Russian pro-Kremlin media, are offensive to a very large number of Ukrainians.  The authorities have yet to prove that there are any grounds for his detention and the serious charges, with these having already resulted in an application to the European Court of Human Rights (more details here).

The May 11 ‘referendum’ was doubtless intended to repeat Putin’s stunt in Crimea.  Western countries which had scarcely reacted to Russia’s annexation of Crimea did, however, begin threatening measures over the aggression in Donbas, and Putin even ‘called on the militants’ to postpone their referendum, with this supposedly ignored.   Russia was funding and manning the so-called ‘separatist’ uprising, and all pro-Kremlin media presented the pseudo referendum as fair and legitimate, the Kyiv government as murderous and the west as collaborating with fascists.  The event had been condemned by Ukraine’s Central Election Commission and all major election watchdogs.  Those who did observe it reported that you could ‘vote’ without any passport or other legitimate ID, meaning that you could also ‘vote’ as many times as you liked, and you didn’t need to be from Donbas to take part.  There were militants with machine guns everywhere, and a number of school heads, administration officials and others, who had refused to allow their buildings to be used for the event, were abducted at gunpoint.  They were among a very large number of civilians being taken hostage.