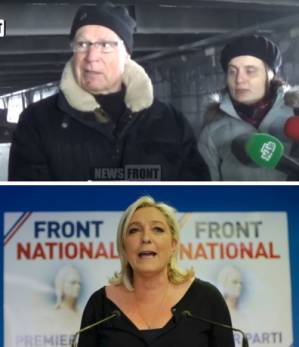 A delegation led by Jacques Closterman, a French politician linked with Marine Le Pen’s far-right National Front and two lawyers - Josy Jean Bousquet and Hanen Maksud – are on a visit to the so-called ‘Donetsk people’s republic’.  Their aim, according to Russian and Kremlin-backed militant sources, is “to gather cases of Ukrainian war crimes against residents of Donbas for the further circulation of such information among the public of France and Europe”.   Who commissioned the visit is not clear, and of relevance given that the three are also widely referred to as “human rights activists”, coming as guests of the militants to “investigate war crimes” allegedly committed by those the militants are fighting.

It is also of interest since both Russia and the militants have just rejected Ukraine’s request for UN peacekeeping forces to be deployed in Donbas.  Russia used its power of veto in the UN to block an international tribunal over the MH17 disaster when a Russian-produced Buk missile shot from a militant-controlled part of Donbas downed he Malaysian passenger jet.   Militants in both the Donetsk and Luhansk oblasts have recently expelled most western aid organizations, and prevented OSCE monitoring mission officials from gaining access to areas under their control.

While the Russian Investigative Committee and Russian media have claimed that Ukraine is guilty of horrific war crimes, the reports issued by, for example, the UNHCR, paint a very different picture.  The last report states that “Serious human rights abuses against the population residing in the territories controlled by the self-proclaimed ‘Donetsk people’s republic’ and the self-proclaimed ‘Luhansk people’s republic’ continued to be reported, with new allegations of killings, torture and ill-treatment, illegal detention and forced labour received by HRMMU.  Local residents continued to remain without any effective protection of their rights. Places of detention maintained by the armed groups remained virtually inaccessible for independent oversight, and international organizations, including HRMMU, did not have access to detainees.”

Instead of facilitating independent reports, Russia and the militants have consistently invited politicians, etc. known for their pro-Russian views.  Marine Le Pen, whose party recently received a huge loan from a Russian bank, has unfailingly supported Russian President Vladimir Putin and his actions in both Crimea and Donbas.

In May 2015, Jean-Luc Shaffhauser, a European Parliament deputy for Le Pen’s National Front, took part in a ‘forum’ in Donbas and offered to present the point of view of the two militant ‘republics’ in Europe.

The reports in all Russian and militant media either directly link Closterman with Le Pen’s party or say that his Mon Pays la France party is part of Marine Le Pen’s Rassemblement Bleu Marine right-wing coalition.  In fact, however, Anton Shekhovtsov, researcher into right-wing movements, believes that Closterman may have been expelled from Rassemblement Bleu back in September 2015.  If so, it was not for ideological differences with respect to Russia and its actions in Ukraine.

The ’delegation’, which like all others will have almost certainly arrived from Russia through the part of the border under militant control, can be relied on to present a specific ‘human rights perspective’.

During a video made by the Kremlin-funded RT, Closterman is heard saying that “it’s very difficult to explain that less than 2, 500 km from Paris, there are horrors such as the ones that have occurred here, among these people. It’s also difficult to explain that these people fought for their freedom, and that everything that happened here was in the name of liberty for the people themselves, for the rights of the people to self-determination. This is something extraordinary."   Their “mission” is to show the French from across the political spectrum “what happened in Donbas”   In order to be able to do this, they have a full program of meetings, accompanied by DNR ‘defence minister’ Edward Basurin, with militant representatives, a roundtable on “the international information war against the DNR” and meetings with alleged victims of Ukrainian war crimes and with French volunteers fighting with the militants.

Russian TV 5 viewers are told that that these are human rights activists from France, though later Closterman is called a politician from a party within Marine Le Pen’s coalition.  The channel asserts that “the human rights activists” have come to find out for themselves whether human rights are observed in the south-east of Ukraine.  Bousquet is referred to as a major French lawyer and  “president of the association of human rights activists of France’, a post not apparent from a Google search.  The  television presenter first explains that “the task is to understand how to efficiently gather proof of the war crimes of the Poroshenko regime and often Ukrainian nationalist fighters not under his control”  Bousquet is then quoted saying that “this is a long and multi-stage process, the beginning of which we have made today.  It is not easy to achieve documents for EU level”.

It is not at all difficult given the will to tell the truth, and to allow independent observers to monitor the situation, not just those whose ‘assessment’ was known in advance.

Since Russia’s invasion of Crimea, all so-called ‘elections’ or ‘referendums’ have been condemned by the international community but praised as exemplary by the members of far-right or neo-Nazi, as well as some neo-Stalinist or far-left, parties brought in via Moscow to ‘observe’.

This is the first time that a so-called ‘human rights mission’ has been attempted and found seriously lacking in credibility.