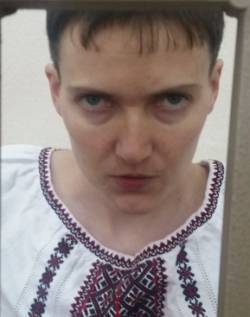 From the photo tweeted by lawyer Ilya Novikov

Crimean Political Prisoners Oleg Sentsov & Oleksandr Kolchenko have passed letters of greetings and support to Nadiya Savchenko, whose trial resumed in the Russian city of Donetsk on Jan 13, Nadiya’s 27’th day on hunger strike.  According to one of her lawyers, Ilya Novikov, the court has refused to allow videos and photography in the courtroom, probably because of mounting concern about the 34-year-old former military pilot, now Ukrainian MP’s health

Both letters, made public by Nadiya’s sister Vera, are brief but to the point.  Oleksandr Kolchenko writes in Ukrainian with New Year and Christmas Greetings. 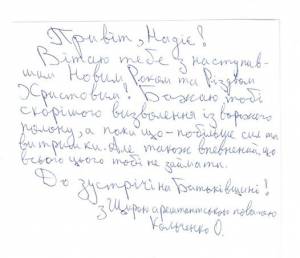 “I wish you the earliest release from this enemy captivity and for the moment – as much strength and resilience as possible.  I am sure they can’t break you!.”  He signs off “until we meet in Ukraine”.

Oleg Sentsov greets ‘Nadyusha’ (a warm diminutive form) with the festive days that have already passed, and writes: 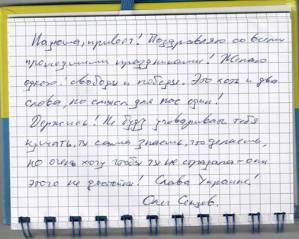 “I wish you just one thing – freedom and victory.  That may be two words but their meaning for us is one!.

Take care!  I won’t try to persuade you to eat, you know what you’re doing, but I so don’t want you to suffer – they’re just not worth that!  Glory to Ukraine!”

Nadiya Savchenko declared hunger strike on Dec 17 in protest at the latest extension of her detention.  Her lawyer Nikolai Polozov has reported that she has lost 15 kilograms, and is experiencing pancreatic pain and nausea.

The lawyers also report that the court has once again refused to add evidence to the case, this time proving that Savchenko was taken by force from Ukraine to Russia with the active involvement of Igor Plotnytsky, now leader of the so-called ‘Luhansk people’s republic’ and Russian investigators, including FSB colonel Sergei Pochechuyev (more details about the appearance in court, wig and all, here: Savchenko Trial turns into Insultingly Absurd Pantomime ).

It is an indicator of the political nature of this ‘trial’ that evidence of Savchenko’s alibi and material showing up the prosecution’s case, has been consistently rejected by Leonid Stepanenko, the presiding judge 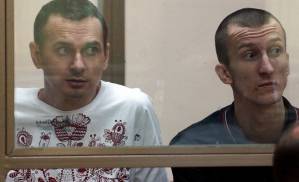 Oleg Sentsov and Oleksandr Kolchenko are currently in a transit remand prison, and it is not known where they will be sent.   Sentsov has been sentenced to 20 years, Kolchenko – 10 for a totally non-existent ‘terrorist plot’

Please write to the men!