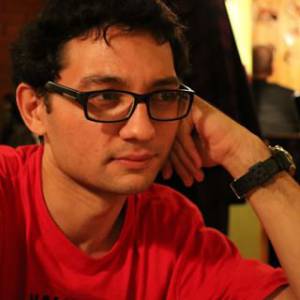 Zair Akadyrov, a well-known Crimean Tatar journalist and blogger, was detained on Friday morning by officials from the so-called ‘Centre for Countering Extremism’.  The journalist was standing awaiting the beginning of the court hearing in the trial of Crimean Tatar leader Akhtem Chiygoz and other Crimean Tatars who are facing legally grotesque charges over a pre-annexation demonstration.

Emil Kurbedinov, one of the lawyers present, reports that the young journalist showed his documents, but the officials still tried to push him into a car and take him to the ‘anti-extremism centre’.  According to Krym SOS, Akadyrov refused to go with the official - Artur Shambazov, a former Ukrainian Security Service officer who was involved in the case of political prisoner Oleksandr Kostenko.  At this point two OMON riot police officers tried to push him into the car.  He managed to get out, and since by that stage a number of witnesses had appeared, Shambazov instead insisted that the journalist come with him to the police station opposite the Supreme Court where the trial is taking place.  Akadyrov tried to refuse, since no reason had been given for his detention, but was forced into the police station by around 10 officers.

He was released around an hour later and told the Radio Svoboda Crimean Service that they had asked him all kinds of questions about what he does, what he writes and why.  He explained that the officials had tried to take him by force from the actual courtroom, and threatened him.

“I was detained in the court building, they tried to claim that I had unlawfully taken photos, made notes on my telephone and asked me to come to the counter-extremism centre.  I objected to the detention.  They tried to grab my passport but I wouldn’t hand it over.  After this the police captain called ‘Berkut’ officers who seized me and took me to the car.  They warned me not to resist or they’d put handcuffs on and take me to the cellar”.

There was a preliminary hearing on Dec 28, and the court on Jan 15 is due to hearing the indictment against Akhtem Chiygoz, Mustafa Degermendzhy and Ali Asanov (as well, probably as Eskender Kantemirov; Eskender Emervaliyev and Arsen Yunusov who are not in detention.).

The trial is one of exceptionally cynical lawlessness.

There are strong grounds for concluding that the two men also in detention -  Ali Asanov and Mustafa Degermendzhy – have been put under enormous pressure to testify against Chiygoz, and may be still held in custody as punishment for refusing.

According to Refat Chubarov, Head of the Crimean Tatar Mejlis:

“The participants in that mass rally succeeded that day in preventing a session of the Crimean parliament , called by its leaders who were by that stage totally under the control of Russian Security Service [FSB] officers illegally present in Crimea.  They thus disrupted a scenario carefully planned by the Russian military-political leadership to conceal their criminal plans for seizing Crimea and give the international community the illusion of ‘legality’ for wrenching it from Ukraine”.

Even if Russia had the jurisdiction to try anybody over the events that day, there is ample video footage showing Chiygoz and other Mejlis leaders actively seeking to avoid confrontation and bloodshed.

There is no justification for holding any of the three men in custody.  Ali Asanov, in particular, has four small children, one born after he was taken into custody, and an elderly father, all of whom he is prevented from providing for.

Chiygoz has made it quite clear that he sees this case as aimed at terrorising Crimean Tatars into leaving Crimea and that he is remaining in his homeland.