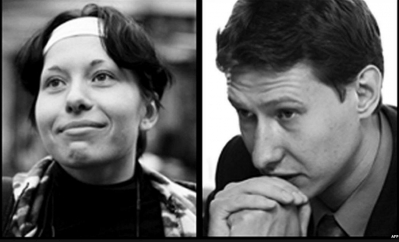 It is seven years today since human rights lawyer Stanislav Markelov and 25-year-old beginning journalist Anastasia Baburova were gunned down in Moscow by members of a neo-Nazi Russian nationalist organization.

Stas Markelov was committed to defending those whose rights were being abused – in Chechnya, by the police, as well as by neo-Nazi nationalists and others.  The 34-year-old who was married with two small children was shot on Jan 19 while walking away from a press conference where he was representing the family of Ella Kungaeva, the 18-year-old Chechen girl raped and murdered by Russian colonel Yury Budanov.

25-year-old Nastya Barburova was originally from Sevastopol in Crimea, where her parents live.  She was studying in Moscow and had just begun working for the independent newspaper Novaya Gazeta.  While sharing the same anti-fascist views as Markelov, she had met him to take an interview about his work and the Budanov case.  It is generally assumed that the killer was aiming at Markelov.

Considering the number of high-profile murders that have remained unsolved during the years that Vladimir Putin has been in power, the fact that the authorities soon began talking of a nationalist link initially aroused scepticism.  In fact, however, there proved to be considerable evidence and in Nov 2011 Nikita Tikhonov, a member of the neo-Nazi and racist organization BORN [Military Organization of Russian Nationalists] organization was sentenced to life imprisonment for the murders.  His partner Yevgenia Khasis was jailed for 18 years for her part in the crime.

BORN is known to have been involved in at least 10 killings, as well as attacks, etc.  There had been allegations from the outset of strong links between the organization and the Kremlin.  These were then reiterated by Tikhonov and Khasis, especially during the trial in 2015 of Ilya Goryachev.  He was found guilty of masterminding, though not directly taking part in at least 5 murders, and was sentenced to life imprisonment.  All allegations were, not unexpectedly, denied by the Kremlin and at official level, but the trial highlighted longstanding links between Russian ultranationalists, the war in Donbas and the Kremlin (see:  BORN in the Kremlin? Russian ultranationalist trial and links with Ukraine).  The organizers of this year’s remembrance gathering in Kyiv point out that although the direct killers have been sentenced, some of the witnesses have not been questioned and are playing a significant role in Russia’s military aggression against Ukraine.

It is frustrating that the location of this year’s gathering is not being announced in advance for safety reasons, with various Ukrainian far-right groups reacting with primitive antagonism, both to a gathering in memory of left-wing activists and to any gathering celebrating pluralism in all its facets.   The organizers ask people to write to them.

Please watch and circulate the video here    The words: “Love me please” in the title are from almost the last letter from Nastya that her parents received, and which understandably worried them, as it seemed as though their daughter was bidding them farewell.